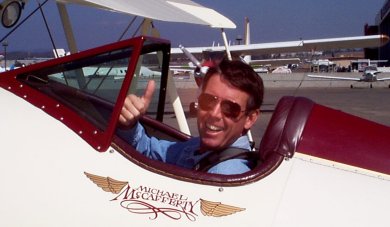 A man can accumulate many names in a lifetime,
some more colorful than others,
some have deeper meaning.
Here are just a few which have come my way:
AirMikie - the name of the Biplane Flying Service which ran in Carlsbad Ca. while I was learning to fly.

Sundance - There is a tradition in military aviation that when a man enters the fraternity of pilots, he is bestowed a call sign (name) by his instructor. Click on the name to read the story about how I accidently discovered how to make multiple sunrises, sunsets, moonrises and moonsets, all natural, and all within less than half an hour.

Double M - an obvious reference to the initials in my name. It's my "business" persona name.

Michael - an alias I chose for myself around the time I achieved the Age of Reason. I like it because it reminds me of the great artist Michaelangelo, and Michael the Archangel, and because you get the neat nickname of Mike as a bonus. I liked it much better than my given name, which will not be revealed by me except under the most extreme torture. Michael is such a perfect name that I chose it for my son! When I wanted to call my daughter Michelle, my wife (now ex) suggested that it was a bit much. So we agreed on Kendra. I was looking forward to a big family of kids all named Michael, or Michelle. Doesn't George Foreman have a bunch of kids named George?

Triple M - my sign-on code at TeleMagic, Inc. The program requires 3 characters, and since my finger is already on the M, it is easier to make my code three Ms than any other. This was the beginning of the thinking of the name for Triple M Systems, and after considerable playing with words, finally came up with another meaning for the three Ms: Mind + Method = Magic. This is a reference to the concept that "Whatever can be conceived can be created".

The Waco Kid - I kinda like this one. Got "WacoKid" for my license plate. Don't you think it has a certain "je ne sais quois"? A certain carefree, youthful, cowboy thing going on with it. There are drawbacks with this one, however. Waco refers to the the manufacturer of the biplane. It is a Waco YMF-5, built originally in 1935 and is an abbreviation for "Weaver Aircraft Co". The word "Waco" is pronounced, in this case, as in "lock-o", and not as one would pronounce the name of the city in Texas (way-ko), and certainly not "wack-o". So while it may be confusing for others, it doesn't really matter much... it's MY name! Lucky - needs no explanation! Mike, Mikie, Mikey, Mick, Mac - all the usual suspects, variations on a theme. Michael Ferrari - for a time, a lot of people actually thought my last name was Ferrari. It got started with a few friends and frisbee players, an obvious reference to the Ferrari 275 GTB I was driving at the time, but the name stuck after the car went away. I still use it from time to time when making reservations for dinner. Sometimes I just don't feel like spelling M.C.C.A.F.F.E.R.T.Y. for the 20th time today. -- .. -.-. .... .- . .-.. / -- -.-. -.-. .- ..-. ..-. . .-. - -.-- Morse code. I was bludgeoned into learning bits of it on my biplane tour of the US in '97 by wingman Art Annecharico. He needed to learn Morse code for his ham radio license application and he bought a little device at Radio Shack which drove me crazy with dots and dashes when all I wanted was some peace and quiet. But we are still great friends! To translate your name (or anything!) into Morse code, click here!

After I signed up as the new owner of the URL "MichaelMcCafferty.com", I realized that since I was the only one who was going to be getting email at this address, that I had infinite freedom to choose any email address I wanted. (it's as if I was first in line when they open the window on the first day they sell vanity license plates! I can have anything I want!) But wait, it gets better, not only can I have ANY email address I want, I can get as MANY as I want. And not only that, but even more fun (and fearful!), everyone else in the world can call me anything THEY want! That seemed like an interesting experiment, so I sent a notice to a bunch of people letting them know that my email address had changed and the new address was "whatever @MichaelMcCafferty.com" and that they could replace the "whatever" with whatever they wanted. Here's some selected results of that fun little experiment: ToTheManThatIsAlwaysHittingOnMyWife @MichaelMcCafferty.com Alex is just kidding of course, he's probably just referencing the fact that Joni and I have fun hanging out together. I have learned it is a good rule to respect marriage vows. HisHighness @MichaelMcCafferty.com I guess Anne feels that I have a rather lofty self image. YOGAMAN @MichaelMcCafferty.com Carol rejoices in my new yoga practice. MGFM @MichaelMcCafferty.com Cathy made me guess, and it shows what good friends we are that I figured it out quickly: "My Good Friend Michael". OnewhosecretlylovesPorsches @MichaelMcCafferty.com David, you know this couldn't be farther from the truth! I openly love Ferraris. David has disliked Ferraris (at least in my presence) since that day more than 20 years ago that my Ferrari 275GTB 2-cam long nose first dripped oil on his driveway. I tried to explain that dripping oil is just something that older Ferraris do, kinda like that fact that his dogs just kinda put their noses in my groin. It's nothing personal, just the way it is. Anyway, we always have lots of fun with the whole Ferrari-Porsche rivalry. It tell him that the difference between Porsches and Ferraris is like the difference between artificial insemination (Porsches) and mad passionate love making (Ferrari, of course). stranger @MichaelMcCafferty.com Deb is a most extraordinary combination of aviatrix and redhead! I think she is referring to the fact that we have not been in contact for a while, and not the fact that I am "more strange". coolhandsomeone @MichaelMcCafferty.com Now, we are getting more descriptive! This is good. I encourage this stuff. From Deann. MMM @MichaelMcCafferty.com Obvious reference to the days of TeleMagic. From Frank. Don'tcallmecollect @MichaelMcCafferty.com Glenn is a writer whose works contain some degree of humor. yougottabekiddingme @MichaelMcCafferty.com Glenn couldn't wait for the "subject" line to register his disfavor with my email that announced that I was selling the biplane! overthehump @MichaelMcCafferty.com Contributed by Jennifer B. Not the most flattering appellation I have received, but included here in an express attempt at fairly representing the email name experiment. When I pressed her on her meaning, she simply said it was Wednesday, you know, "hump day". I'm not so sure... Sexy @MichaelMcCafferty.com Jennifer W. God bless her! Now this is the kind of email that goes in the "save forever" folder. Mikie @MichaelMcCafferty.com Jerry knows me from the days in Winnetka, Illinois. Freak @MichaelMcCafferty.com "Freak" is actually an endearing word, and should not be coupled with the name "stranger" above to indicate any mental imbalance on my part. Really. Kat says that she will read to me when I am 95 years old. I'm looking forward to it! Wacko @MichaelMcCafferty.com Again, Kat is a good friend, and just having fun here. Wacko is a play on words, more precisely, The Waco Kid, which refers to the biplane. So I'm really not a wacko, really. Ohmygoshdon'tyouhaveanythingbettertodothanrantonaboutachangede-mailaddress @MichaelMcCafferty.com Marg gets right to the point. I like the fact that even punctuation is allowed in the email address!

O'Lovely @MichaelMcCafferty.com Thank you, Megan! Now, you see, this is the kind of positive email I like to get!

dontcashthecheck @MichaelMcCafferty.com Mike was referring to a large check in payment for the Scaglietti Corvette which he sold for me. He was kidding. Seems like I know a lot of kidders.

hi_from_Katya @MichaelMcCafferty.com Same friend, passing on greetings from another friend in Moscow, Katya, who was so kind and giving above and beyond the call of duty.

New.Friend @MichaelMcCafferty.com Peri is friend of a friend, and is moving to Del Mar from Hawaii. Notice the rare use of the dot before the @ sign.

yogahead @MichaelMcCafferty.com Sean is really a lot more creative that this. But most of it would not be "G" rated.

yank @MichaelMcCafferty.com Tricia is a good friend from England, where they still think kindly of Americans for saving them from speaking German, and give us nicknames from the great wars.

All of this reminds me of the poem by Robert Burns, who writes:

"Oh, what a gift the Gi'er gi'e us,
To see ourselves as others see us."