The little village of Termon isn't even on the map I have of Ireland, but it's about 10 miles outside of Letterkenny. I took a taxi to "The Lagoon", the pub in Termon, owned by John McCafferty (not a relative). I met him the last time I was here in Ireland and he was very helpful in locating the few remaining relatives I have left here.

Although the local phone book lists 110 McCaffertys with a phone, there are probably many more without one. I called the phone number I had for a Margaret Toland, but it was no longer in service. John told me that her home is now vacant and that she has moved to Creeslough, farther north.

The only relative left in Ireland with the name McCafferty is Paddy McCafferty, who lives alone on a desolate hillside, well off the paved country road. Even John, who knows these parts like the back of his hand, had trouble finding the overgrown grass and mud one lane path which leads to Paddy's house. Paddy has lived in this same home since he was nine years old. He is now 74. He doesn't drink, doesn't smoke, and has never been married.

He gets by on a small pension, and he tends a few cattle in the nearby pasture. Friends in the area look in on him from time to time. He has no car, but gets to the store by walking the short way to Termon's store across the fields. He has no phone, and can't see why he needs one. His conversation is liberally sprinkled with phrases like "Can't complain" and "That's the way it goes" and "What can you do about it". He seems accepting of his life, an not at all unhappy about it. 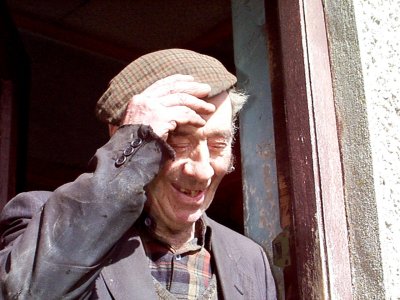 Not too far away lives Jimmy McDaid, whose aunt was my great grandmother Mary McGinty. We visited for a while and he showed me photos he has collected of his family, and gave me a small picture of himself and a few of his family standing in front of the remains of my great grandmother's cottage at Doon Well. He also showed me a collection of letters he has dating from as early as 1850, written between various members of his family. From him I learned that my great-great grandfather Patrick McCafferty was a shoemaker and that the original farm where he raised his children was 5 acres in Doon Well. These are little facts, but they help put together some of the missing pieces of family history. 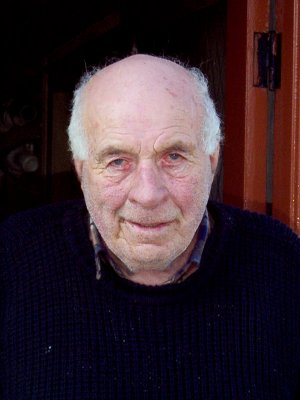 Jimmy McDaid is still living in the house where he was born almost 80 years ago. A very religious man, he has been away from home on a few occasions, primarily to make pilgrimages to shrines of Our Lady (Lourdes, etc). Jimmy has a keen interest in genealogy and can trace his family through 7 generations, all the way back to the mid 1700's.

Like Paddy, Jimmy doesn't smoke, and drinks rarely. He seems quite content and says there is nothing he needs. He seems to be in excellent health with a firm handshake earned from many years working in the construction trades.

It was the highlight of my visit to Donegal to be able to meet and spend a little time with a couple of my few remaining relatives in Ireland, and to learn a little more about my ancestors and how they lived.

The weather continued to be unflyable, with high winds and rain throughout the day.