There is an ancient holy place in County Donegal called Doon Well, the site of a natural spring, the waters of which are said to have special healing powers.

Beside the well grows a bush, upon which are tied countless pieces of fabric from the clothing of the pilgrims who have come here for healing. Among the branches and stuck in the ground around the bush are many crutches and walking sticks, some of which must have been here for a long, long time. 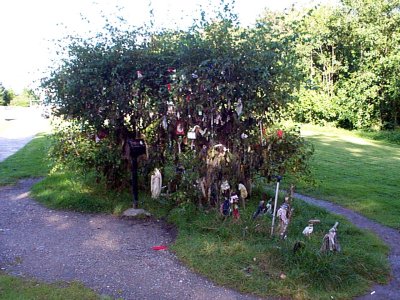 It is Donegal's most celebrated Holy Well, and has been a place of pilgrimage for hundreds of thousands of people in the past century alone. But its origin and the traditions associated with it go back much further still.

There are many other holy wells scattered throughout Donegal, some of much greater antiquity than that at historic Doon. But none is held in greater veneration or visited by such vast numbers. Year by year, especially from the beginning of May until late September, never a day and hardly an hour passes without its quota of pilgrims. They come in silence and barefoot, reverently reciting the traditional prayers and partaking of the water and bearing away with them the bottles of holy water for use of the sick and infirm at home or to send to relatives and friends in far distant lands. Hardly a single Catholic home in all Donegal is ever without Doon Well water.

But the visitors to the well are not from Donegal alone. They journey from many other countries across the seas, because the fame and efficacy of its never-failing springs have been wafted to all parts of the world, wherever Donegal people are to be found.

The history of the well is none too factual, but it is established that it goes back for hundreds of years. Doon Well is credited with having been blessed by the saintly Lector O'Friel. Nothing can be said with certainty as to when he lived, but it is an historical fact that one of that name worked in this lonely part of Donegal about the fifteenth century. Lector O'Friel was a man whose sanctity of life was matched only by his wonderful power as a healer. Sufferers from all sorts of painful and apparently incurable maladies came or were brought to him in quest of cures. Many and extraordinary were the stories told of the efficacy of his prayers for those with bodily afflictions.

Tradition tells us that in his old age, when his vigor was waning and the shadow of death was hanging over him, people became disturbed at the thought of losing such a holy and charitable man in whom God had implanted such power for miraculous healing.

"When I die, my powers will live on after me" he told them. He blessed the well and told them that those who drank or applied its water would have the benefit of his prayers of intercession.

Down the years, countless stories have been told of cures effected to all sorts of ailments at the spot and of how disabled or crippled pilgrims were able to leave behind them their sticks, crutches and bandages after one or more visits.

One cannot go to Doon Well and fail to note the lofty "Carraig a Duin" (Doon Rock) standing sentinel-like nearby. Most visitors make a point of climbing to its uneven summit, from which there is a breathtaking view of the lovely countryside for many miles in all directions.

It was while standing atop this great rock, 8 years ago, that I first got the idea that I would like to fly low over this awesome countryside. It was the genesis of this great adventure.

Here in truth one rubs shoulders with history, making physical contact with the era of the celebrated Clan O'Donnell. It was on this very spot that those great chieftains of the O'Donnell tribe were inaugurated. The last O'Donnelll to be crowned at Doon Rock was Niall Garbh, a cousin of Red Hugh, in 1603. Here also it was that Sir Cahir O'Doherty, just out of his teens, and the last Chieftain of Inishowen, was slain in battle in 1608.

Just two hundred yards from Doon Well, and in the shadow of Doon Rock, my great grandfather Hugh McCafferty had a farm and married the girl next door, Mary McGinty. The Great Famine, and the financial ruin which resulted, forced them to emigrate, first to Scotland where they had several children, and then on to the USA (Philadelphia), where they had several more, establishing the McCafferty clan in the New World where it subsequently flourished.

About 8 years ago I visited Doon Well, and talked with Charles Gallagher who lives in the house directly next to the well, and he showed me the place where my great grandfather's cottage once stood, and the rubble of the foundation which was all that was left of it. I took away with me a rock from that foundation, as a piece of the past, with the intention that one day I would have it split up into pieces, mounted and framed, and given to my father and my brothers and sisters.

Yesterday, I saw Charles Gallagher again for the first time in 8 years, but there was no mistaking him. He seemed not to have aged at all in that time, and remembered me easily. We talked of the past, and of Hugh McCafferty's farm and cottage, and Mary McGinty, and he told me of the young lad who was building a new home right on top of the site where my great grandfather's home once stood.

I walked the short way from the Well, and up the short un-named and unpaved lane, to the site of the old McCafferty home, and winced when I saw the bare new cinder block shell and the construction debris desecrating this good place. I walked fully around it, looking for any signs of the old cottage foundation, and I was saddened to find that it was gone without a trace.

I inspected this new home more closely and saw that it was situated with a great central room facing to the northeast, looking out over the small farm which once was Hugh McCafferty's, and beyond it the great view of dozens of farms in the valley and up the gentle hills into the distance. It was as pretty a picture of Ireland as there could be, and I thought how Hugh and Mary must have loved this view, which has probably not changed much in the hundred plus years since they were forced to leave. 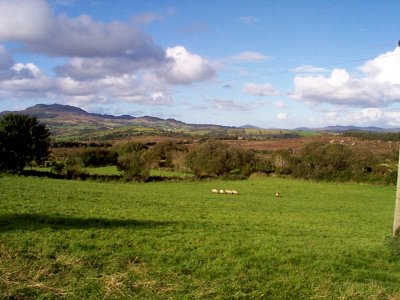 So, the next time we talk and you ask me "How are you?", and I say "Doon Well", you will know that I am in fact "doing well", and that I am also remembering and saluting a place of great personal and family significance.

And I hope you are "Doon Well" too!