The largest town in County Donegal is Letterkenny. Unfortunately, the airport is quite small. The short narrow grass runway was very soggy, and there is a slight dog-leg in it, with a fence at one end and the hill at the other. Ultralight airplanes use it, but this is no place to for my biplane, so I left the Waco at Donegal airport.

I wanted to visit Letterkenny because it is nearest to Doon Well, and I thought I would like the town environment instead of the isolated place I've been staying for the last two days.

What I found was that my computer's modem wouldn't connect with the phone system at my new hotel, and I spent the day dealing with computer and phone stores to fix the problem, but we never did get it figured out. It seems as if the modem has been fried. The thing that compounds the problem is that I didn't bring the floppy disk drive with me, and there is no way to install a new modem without reading in the new drivers from a floppy disk. So I have to turn over my computer for the evening to a local computer store so they can try to install a generic external modem that won't need drivers. It's all techie mumbo-jumbo, but the bottom line is that I will be spending the night without my computer for the first time in months. It's very difficult for me to let go.

I have been incommunicado for two days now, and am having email withdrawal symptoms.

I also spent some time on the phone with some of the details piling up. The Waco factory says that they have demo flights scheduled in Paris on September 25-27, so my tour will end then at the latest. It will be my job to get the biplane back to France by then, if possible, and if not possible due to the weather, then the factory pilot Carl Dye will fly it IFR from wherever it gets stuck.

The end of this tour is not something I want to dwell on at this time, but I suppose I have to face it sooner or later. Another reality is the special European flying insurance. I have already had it renewed for one additional month, and it expires on the end of September. And last, but certainly not least, is the weather, which has taken a dramatic turn from summer to winter. If for no other reason, it will soon be over simply because it will no longer be fun to fly in this weather.

Here is Mount Errigal, the highest elevation in County Donegal at 2400 feet. Healthy people like to climb it. I figured I would stay healthier if I didn't climb it. 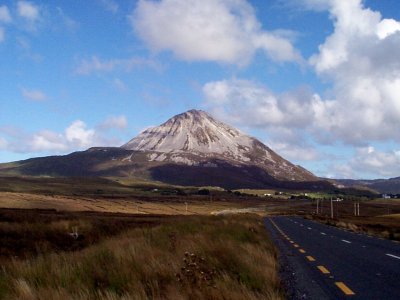