08/31/97
Reflections From Within
County Donegal, Ireland

As my biplane rested quietly in the hangar at Donegal airport, the day wore on in a relentless drizzle from a gray and gloomy sky. The rain-dappled window of my room looked out to a landscape made barren and featureless by a veil of fog and cloud. Cold it was, a cold that seeks your bones.

It was a day fitting for the mourning of The Princess.

This morning I started to notice the first signs of a scratchy throat, probably a souvenir of yesterday's damp and chilly flights. It would have been perfect if this hotel had a fireplace to keep warm, but it doesn't, so I had to seek the medicinal internal warming of Paddy's Irish whiskey, civilized with a cup of tea. I used this same remedy in Paris with great success. The symptoms persisted, but the concern evaporated.

Donegal is a land situated on the northwest coast of Ireland, bravely facing the harsh cold storms which attack from the North Atlantic. The people who have survived in this climate have had to learn to deal with Nature on its own terms. Their lives are simple, and seem to move with a pace that is in keeping with the environment. Their homes are simple, many still with thatched roofs. The stores sell only basics, as the people have neither the desire nor the wealth to seek the frills of more complex civilizations.

There is, however, a song that can be heard on the lips of every person you meet, and that is their language. It is a lilting, sing-song lullabye, a playfull, teasing, fun-loving spirit that comes from their soul. They may have the most minimal personal possessions, and almost no hope of ever achieving them in this remote place, but their voices are priceless living works of musical art, free for the asking, and many times even if you don't. They are a friendly people, uninhibited and yet shy, blushing easily and brightly through pale white-skinned faces. These are the Irish, my people, my heritage.

Those Irish who are still here on this island are decended through centuries of awesome hardship and persecution, a legacy which most of them bear with stoicism. It is only a minority who have taken to extreme political measures to force their voices to be heard. The great majority are peaceful, loving, family oriented, and religious, enduring the hardships of the present and praying for peace in the future.

When I reflect on the premature and wasted passing of The Princess, I am given to thinking of the greatness of each of us, the gifts we all have to share with each other, the gifts of friendship, compassion, warmth, and love. In her, these traits were so highly visible, but they are also quietly at the core of these people in Donegal. And in all of us, if we choose to set them free.

View at low tide, on a cold and rainy day, from the Ostan Gweedore Hotel and Leisure Complex, in Bunbeg, County Donegal, Ireland. 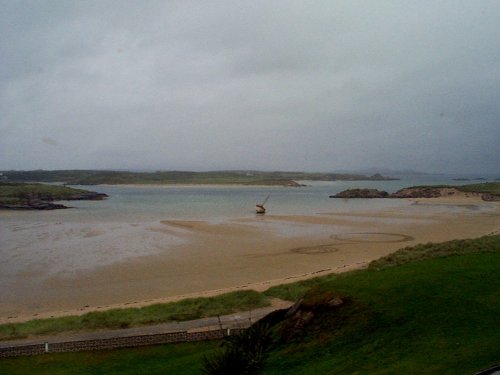