The weather forecast indicated it would be a typical British day, with lots of low clouds, rain, cold, and wind. Not at all the kind of day for flying an open cockpit biplane. I decided to explore the Newcastle area.

The porter at the hotel arranged for a taxi driver friend of his, Steve, to take me out to Hadrian's Wall, a major archaeological site about 40 minutes drive to the west of Newcastle. It was a very pleasant and relaxing tour, as Steve was in no hurry at all. We motored along high-crowned back country roads which were barely wide enough for two cars to pass each other, and in some cases they were only one car wide, with occasional small roadside spots to pull over and let oncoming traffic pass by. The properties were mostly small plots of land separated by ancient walls of stone dug out of the farmland. The stones were very properly cut on all sides to fit quite perfectly with its neighbors on the wall, and no mortar was used. Simplicity and elegance, effectiveness and efficiency.

We finally arrived at Hadrian's Wall, an 80 mile defensive bastion built by Roman armies around 125 AD, to ward off the attacks from northern tribes, who were in a habit of sacking British towns and taking away silver, gold, and pretty girls. Hadrian, the Roman Emperor, must have heard about the Great Wall of China, and figured that an economy version would work here. Unfortunately, as we know so well, walls don't work, especially in this case, because Hadrian's Wall was only about 80 miles wide, and Britain is about 200 miles wide. He probably never even thought of the possibility of the Norsemen sailing their ships around the wall. But an Emperor is paid to come up with solutions, and this was the best he could do.

Today Hadrian's Wall is a sad pile of rocks, rebuilt in some sections by archaeologists, and torn away in other sections by locals in search of free building materials for their homes. But if you stand at the top of the hill, and look down the long narrow wall into the distance, you can imagine the hard life endured by Roman soldiers who were stationed here, and the long hours on guard duty, patrolling the walls in driving rain, fierce cold, snow, and the constant fear of being attacked by savages intent on taking up with your girlfriend at the local pub. The pleasures of Rome must have seemed a long, long way away. 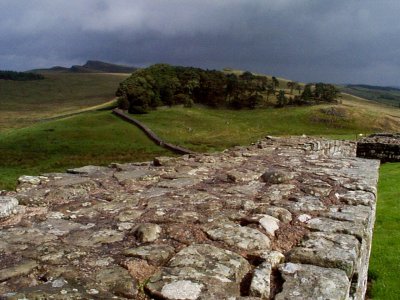 My tour of Hadrian's Wall was interrupted several times with cold rain showers driven by high winds. And then I decided I had seen enough and opted for the comfort of the car, where Steve had intelligently decided to stay warm and dry while I explored.

We motored back into Newcastle-Upon-Tyne, and Steve pointed out the local attractions, including the remains of the ancient wall which surrounded the heart of the city of Newcastle. He left me to go on foot for a few hours, and agreed to meet me later at the base of the great statue to Earl Gray (after which the tea was named, I suppose) which dominates the central section of the city.

Here's a photo of the Central Arcade, a small mall of shops, but with some of the more delightful architecture in Newcastle. 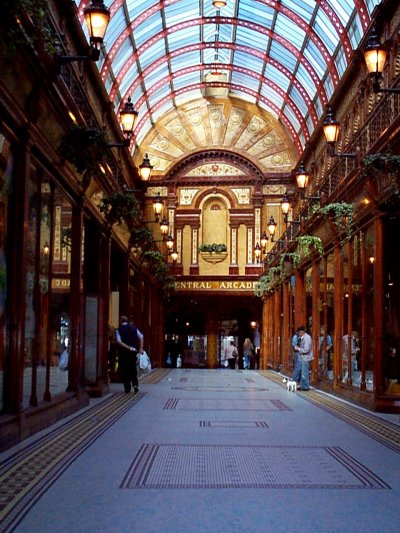 By this time, the day had cleared up considerably, and the sun was shining brightly, although intermittently, through fast moving cumulus clouds. The streets were crowded with people and cars. It was payday, the end of the month, the end of Summer, the beginning of the school term (the university has over 20,000 students). For an hour or so I wandered aimlessly, window shopping and snacking on local foods, and eventually found myself drawn into a Dillon's Bookstore.

The place sells no old books at all, so I can't imagine why I went there in the first place. I'm only interested in the old stuff. But I suppose a new book store is better than no bookstore at all. The place is quite large, with three floors of books of every conceivable subject. There were plenty of books for the university students as well as lots of fiction, and I passed by all of the shelves on the first floor without so much as touching even a single volume.

The second floor was much the same and when I passed by the section of Biographies, I stopped to scan the personalities featured there, but was not interested in anything I saw. And then for some totally unknown reason, my hand reached out to pull back a small volume for closer inspection. It was completely undistinguished in its color, jacket design, and general nature, and I still have no idea what made me sit down and start to read. The title "The Diving Bell and the Butterfly" was boring and vague, and the author Jean-Dominique Bauby was unknown to me. Why am I reading this? Read on...

If you read only one book this year, I suggest that you invest the time to read this scant 139 page miracle of literature. It is the too-short story of Mr. Bauby's (previously the editor-in-chief of ELLE magazine) brief struggle with survival after a stroke in December 1995, which left him totally paralyzed with the sole exception of the ability to blink his left eyelid. And yet, with that singular ability to communicate, he found the way to dictate this book, letter by individual letter, painstakingly, over a period of months in the summer of 1996. The book was just published in March 1997, after his death. It is a fantastic story, beautifully written, and stands out as a monument to man's ability to overcome seemingly insurmountable obstacles, as long as there is the will to do it.

I have no idea why my hand chose that book. It may be more properly stated that the book chose my hand. Hopefully, it is because, now that you know of it, your hand will choose it for yourself, and you will be as moved by it as I was.