How does one face the day after an astoundingly excellent day? It seems impossible that today could be any better than yesterday, and maybe that means that today will be less than yesterday, and that seems like a negative thought to start the day, so I throw that thought out and think about some good stuff. In fact, today turned out to be a great day.

It started yesterday afternoon, with the Spitfire ride. One of the guys on the ground crew for Carolyn's Spitfire is Graham Marks. He helps get the aircraft in and out of the hangar, oversees refueling, starting, etc. Without him, or someone to do these things, it just couldn't happen. You can't just jump in your Spitfire and go flying. You need help. That's Graham's job. I met Graham before my flight when I asked him to use my camera to take a few photos. He took those shots of Caroloyn and me by the Spitfire. Nice work!

We got to talking a little after the ride, and I helped push the Spitfire back in its hangar. Thunderstorms were due in the evening, and I asked Carolyn if there was any more hangar space, for the Waco. "Sure!" Graham helped me push the Waco about a quarter mile from the parking area to the hangar, right in front of the Spitfire. While we are huffing and puffing and pushing my biplane uphill to the hangar, I asked Graham if there was any way I could get my biplane washed. He said I was really at the ragged edge of my luck, with a question like that, but he would make a phone call and see what he could do.

He calls his friend Marian, a nurse who works with terminal patients. She is temporarily between patients right now (for the most obvious of reasons) and could use the money. She says yes, and they agree to wash the airplane the following morning. That was yesterday.

This morning I awoke to a sound I hadn't heard in the last several weeks. It was the soft sound of a gentle rain. Looking out the window it was clear that it had been raining most of the night, and the sky promised to continue with more of the same for at least several more hours. It was the kind of morning that is just perfect for staying in bed.

I figured that the rain would be a perfect excuse to NOT wash a plane, if Graham and Marian were looking for one. By mid day the rain stopped and the sun actually appeared, briefly, between the broken clouds. I took a taxi over to the airfield to see if the Waco was any cleaner, but prepared for a no-show.

It was beautiful! Graham and Marian had worked non-stop since before I even rolled out of bed, and it was way past lunchtime. The biplane never looked better!

This isn't just a story about a clean airplane. It's really a story about some awesome people. Graham doesn't work full time for The Fighter Collection, or Carolyn Grace. He is a volunteer! He gets zero pay. In real life he is paid to be an engineer, making prototypes of whatever. I didn't get all the details of what he does, but it's obvious he doesn't wash planes, or refuel them, or push them around for a living. He does it for fun. He isn't washing my plane for the money, because ALL the money is going to his friend Marian! So what Graham is doing is taking his day off from his paid work, and a day off from his volunteer work, to help his friend Marian earn some money, and at the same time helping ME. Staggering!

And when you consider the kind of work Marian does for her real work, well she has got to be one of those truly saintly people. She has never washed a plane before, and I'm sure she didn't jump for joy at the idea when Graham first mentioned it yesterday, but here she is helping her friend Graham helping me!

So how did it ever come to pass that I get to have two of the world's nicest people wash my biplane? I have no idea, but it was a real pleasure to meet these great human beings, and I wanted to share them with you! 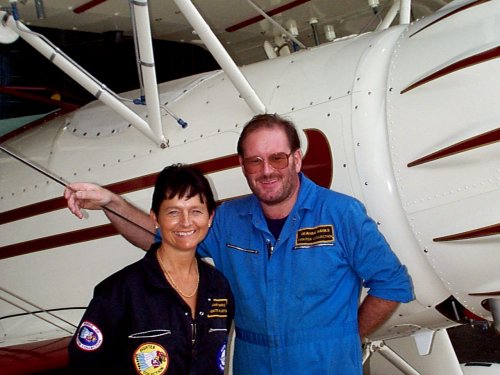 Later in the day, I returned to the The Duxford Lodge. When I checked in there almost two weeks ago, I thought I would only be there a couple of days. I guess you could say I like the place. The room is comfortable, the food is good (French trained chefs) and the staff are excellent!

Speaking of staff, this afternoon is their "Christmas Party", and they are having a great time. For the first time since I have been here, I get a chance to relax and talk with two of the best of the staff at the hotel, Jannick and Geraldine. I have been smitten with Jannick since she first smiled my way, and uttered a sweet French-accented greeting. Jannick, only 21, enjoys sky-diving, except for that one time she got caught in some telephone wires and had to be rescued. She got all excited when she thought she might go for a ride in the Waco, but unfortunately our schedules, and the weather, conspired to keep it from happening. Meet Jannick:

For dinner I was invited to join Bob and Victoria George and their daughter Marina, who are moving here from Seattle. They are staying at the Lodge until they find a new home in the area. Victoria will be doing her thesis at Cambridge University, and Bob is starting his aviation consulting business in London. Real nice people!