Rain finally came to my part of England, but it had the good manners to occur overnight. Morning brought a thick cloud layer which started to break up before mid-day. By the time I strapped into my biplane, the day had cleared considerably, and the sun was shining brightly through scattered cumulus clouds.

I needed some time in the air. I have been on the ground too long, looking at other people's airplanes. I wanted to take an extended flight out to the east coast and fly along the water for a while, but the weather front that brought the rain last night was still between me and the coast, so it would only be some touch and go's for me today.

But that's plenty ok with me. After all, touch and go's at such a historical place as Duxford, on the grass, is a treat not likely to be matched for a long time.

As I fire up the big round Jacobs radial engine, and let it settle down to 700 rpm to warm up, I look down the line of airplanes parked on the grass next to me. To my right, a T-6 "Harvard", a B-17 Flying Fortress, a Grumman Goose (amphibian) and a Yak (Russian aerobatic). To my left is the Deloitine D-27 flown by Mark Hanna a few days ago, two P-51D Mustangs (one of them "Big Beautiful Doll", is rigged up with 500 pound bombs for filming a new Tom Hanks movie), another P-51 Mustang (the early model A), a WWII twin-engine bomber, and another T-6 Harvard. Most of these planes are being readied for use. It's going to be another great flying day at Duxford!

"Zero Yankee Mike, taxi to holding point Two Four Bravo, wind is calm." I love that phrase "Wind is calm". It couldn't be a nicer way to go flying.

I push the throttle forward just a bit and taxi slowly to my left, past the Mustangs, with their crews working busily to prepare them for flight. This time, they barely take notice of my plane as it passes them by. They have already seen it fly, and it has been here a week, so by now I'm just a part of the background, although this is the first Waco YMF-5 ever to visit England.

My biplane rolls smoothly along the grass, and I make small S-turns which allows me to see forward past the big engine cowling. I'm in a very relaxed and almost euphoric mood as I drift slowly along this line of great planes, and on the same grass which has been graced by so many historic planes, and a field which has hosted pilots of great fame over the last 80 years. This is the field where legendary British legless ace Douglas Bader flew sorties into the face of the invading enemy. This is also where many training accidents occurred, killing unlucky, or unskilled, or inattentive pilots. That thought gets me back to reality. Pay attention.

The runup engine checks go smoothly. All instruments are ok. I visualize what I am about to do.

Throttle full forward, the big engine growls and the biplane surges forward quickly, rolling along the grass with increasing speed until, with just the slightest bit of forward stick, the tail of the plane gets lighter and begins to lift almost imperceptibly, and I hold the stick back to build up speed enough to lift off in a three-point attitude. This is the prettiest takeoff to watch, as the plane seems to rise up into the air without any effort whatsoever. It's not the right takeoff technique for gusting crosswind conditions, but it sure is good fun for today.

As soon as we are airborne, I push the nose down and trim for level flight just a few feet above the runway, keeping the throttle full forward and building up speed until, right at the end of the runway, I pull stick back firm, climbing sharply to the left while the airspeed bleeds off rapidly, down to the normal climb speed of 75mph. Then it's stick forward again to keep the airspeed in the climb out.

The left turn to downwind is close in to the runway, and I'm hoping I'll be cleared for landing early, so I can make a short approach with power off, simulating a dead stick landing, but it won't happen this time around because the runway is obstructed with one plane about to take off and another holding. I continue downwind, and notice the last of the weather front from last night still moving east about 20 miles away.

Keeping alert for traffic in the area, as well as watching the traffic departing from the runway, I turn left base and advise Duxford Information that I'm heading for final. "Zero Yankee Mike, cleared for the option, wind calm".

I turn left again, pull the throttle way back, gliding down from the pattern altitude of 1000 feet AGL (Above Ground Level), keeping the runway numbers "24" continually in sight, just above the nose, continually adjusting pitch and power (but only by the very slightest amounts) to arrive at touchdown just a few feet beyond the numbers, in a perfect 3-point landing, and let it roll on without brakes, rumbling along the ground until, just before coming to a complete stop, I firewall the throttle, the engine comes to life and it's off we go again for more fun in the sky.

This is some of my favorite flying. Grass runways, calm wind, an open-cockpit biplane, hardly any traffic, spectators on the ground who appreciate (not complain about) the sights and sounds of aviation, the company of great planes, and great pilots from whom I can learn some of the finer points of flying.

I did about 5 circuits of the pattern today, some landings were perfect, one was a wheel landing (2-point), just for the practice.

One turn around the pattern was a low pass, just to practice what I imagined would be my "routine" at the September 7th Duxford Air Show. The low pass is the simplest of all display maneuvers and starts at pattern altitude just a bit past the numbers, diving down in a turn to the approach end of the runway, full throttle, pulling up maybe 10 feet above the runway for a level pass the length of the field, and then pulling up hard for a climbing turn back downwind. That's it. Just a low pass so the crowd can see the plane up close in flight. Simplicity itself. However, this will be my first air show as a display pilot. I gotta start somewhere, and I can't think of a better thing to do on my birthday.

After my final landing, I taxi back to the parking area, unlock the tailwheel, hold right brake, and throttle forward to about 1000rpm, swiveling smartly 180 degrees to align my wings with the other planes on either side. Then throttle back to idle for two minutes before shutting down. During this two minute period, I complete my logbook entries, and go through the process of removing flying gloves, turning off the avionics master, removing my helmet and kneeboard, stowing charts, etc. It's a quiet moment and I'm usually not looking outside the cockpit until I shut off the mixture control and the engine comes to a stop.

My ears take a few seconds to get used to the complete silence, and I'm sitting there reflecting on what a great time I have just had in the air, when I get the feeling that I'm being watched. Instinctively, I look left and there is a smiling face, standing about 10 feet away, waiting patiently for me to notice him.

Robert Hinton was watching my plane in the pattern and wanted to stop over and say how much he likes it. He likes the idea of an open-cockpit biplane and may get one. Then he tells me about his plane. It's a 1948 Swiss built Pilatus P2, with a 12 cylinder Daimler Benz Argus engine. 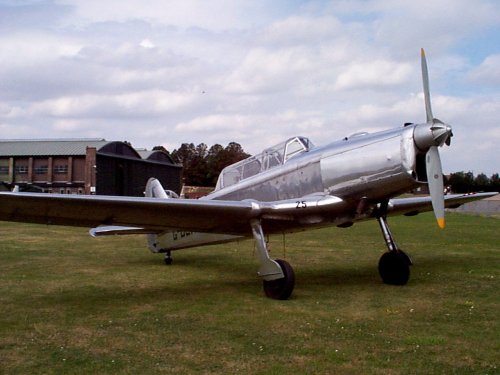 I made the hideous mistake of thinking it was a Chipmunk, which to me, and from a distance, looked similar, but on closer inspection it is much larger than a Chipmunk. It was like mistaking a Rolls Royce for a Checker Cab.

It is highly polished aluminum, and shares the same running gear as a ME 109. The air cooled V-12 is mounted inverted, and the finned spinner is of a very unusual design, probably something to do with the constant speed prop. Robert brought the plane in for a complete engine overhaul at one of the restoration shops on the field. The TBO (Time Between Overhauls) is only 600 hours. Ouch! I'll bet that's expensive for a rare V-12!

We swapped stories about our planes, and Robert told me he took his tailwheel Pilatus off the first time without any tailwheel experience at all. Most of his time up till then was in his Beech Bonanza. It wasn't until a little later that he got to appreciate the demanding nature of a tailwheel airplane. I understand completely. It took me a couple of hundred attempts before the light of understanding, and the learned reflexes, finally started producing acceptable landings.

The more we talked, the more we had in common. He is in the computer graphics business, producing product packaging designs, and has finished a database software package for the industry and is thinking about marketing options for it. He's also flown over to Ireland, my next big stop, and we talked about the various good places to visit. We swapped contact information and he gave me a lift back to my hotel on his way home.

I've got a feeling he may be flying a biplane in the not too distant future.