Tony Errington, the liaison for the 357th Fighter Group in England, who I met yesterday in Leiston, came over to visit Duxford today. His mission was to take some photos of the new American Air Museum, which had just opened August 2nd, and forward them to the members in the US.

First stop on Tony's visit was to check out my Waco biplane, which he seemed to like a lot, making all the right "oooo" and "aaahhhh" sounds and complimenting the workmanship of the builders. Of course what he liked best of all was sitting in the cockpit: 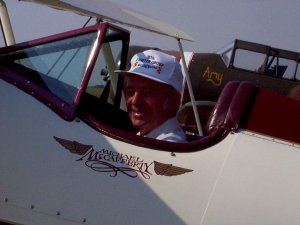 Next we visited the American Air Museum, and even though it was my second visit there this week, I still found plenty to keep me very interested.

For lunch, we motored back to the Duxford Lodge, where I'm staying, and ate in air conditioned comfort. This was a really welcome break because there has been an unrelenting heat wave in England for a couple of weeks and the air is very humid and muggy.

In the afternoon we visited the Land Warfare Hall, a part of the Imperial Warfare Museum, which I hadn't had the chance yet to investigate. There were many different Russian, US, and British tanks, motorized guns, Montgomery's Field Office vehicles, personnel carriers, amphibious vehicles, and lots more. Tony really knows his stuff about these amazing machines. When he was only 16 years old, he volunteered for the Home Guard and soon found himself manning a 3.7 inch anti-aircraft gun. One of those guns is featured in the museum, and Tony was very informative in describing to me how it worked, and the routine for safe operation, and even the very risky procedure for removing a dud shell.

You can learn a lot about WWII in books, but you can't get the feel of it unless you talk with people like Tony. He lived through it, he fought the war on the ground in his own country, and he watched the dogfights in the air over his home. And more than 50 years later, he is still doing his part to show appreciation for the contribution the Americans have made in saving his country.

It was another great day at Duxford. Thanks Tony! 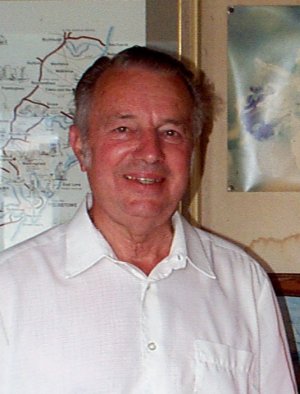