In a time long ago, throughout all of Europe, on the land, sea and in the air, a great war raged. An evil madman was destroying cities and killing millions of innocent people. It was a dark time for all civilized people, but the embers of hope continued to burn and this fire was carried into battle by young men with extraordinary courage.

One of the finest of these heroes, Lowell Williams, flew the legendary P-51 Mustang from an airfield in the land known as East Anglia, England. A quiet and unassuming gentleman, Lowell is now 75 years old, and 5 days a week teaches others to fly aerobatics in the friendlier skies over Southern California.

When I was just learning to fly, just 4 years ago, I had the good fortune and the privilege to meet Lowell, and he subsequently agreed to be my instructor. On one of our extended flying lessons, a six week tour from Michigan to the east coast and then back across the country, Lowell would occasionally talk to me of what it was like during those awesome times.

It was from these conversations that I learned about East Anglia, and the airfield called Leiston, and the 357th Fighter Group, and how pivotal the Mustang was at turning the tide of war in favor of the Allies, about his personal experiences in aerial combat. From these conversations I also learned, from a master aviator and ace fighter pilot, other elements of safe flying: preflight preparation, weather, scanning, navigation, low level flight, formation flying, radio communications, and more, which I would then put into practice in our subsequent flights, and that I still carry with me to this day.

The airfield at Duxford, where I have been staying for the last several days, is among the many dozens of East Anglia airfields that were active during WWII. The field from which Lowell flew, Leiston, is just a little over 50 miles to the east of Duxford, so it seemed important for me to go there, and stand on the same ground where Lowell stood more than 50 years ago.

There are few traces left of the old air base. All the taxiways and two of the three runways are completely gone, and only a tenth of the other runway is left, but not usable. Most of the old buildings are gone without a trace, and there is no sign whatsoever that this place, now farmland, is where young gladiators of remarkable heroism lived, fought, and died in the defense of freedom.

The local Leiston bookstore has no books whatsoever that deal with the topic of their local heroes. Nor does the library. There is a museum in town, and when I went there expecting it to be a great resource of information, the very old lady at the admissions desk said that there was nothing inside about the airfield, or the Mustangs, or the war. It was an agricultural equipment museum, commemorating the machinery made on that spot by the former factory. Another dead end. I was walking away dejectedly when a man came up to me and mentioned that there was a fellow I should meet, but that he was in a meeting and I should stop back in about an hour, and maybe he could help me. In the meantime, he suggested that I go out to the farm where the airfield once was, have a look around, and then come back.

It was as if the town had decided to forget it all as a bad memory. This is not an uncommon reaction for many of the people who lived and served during this period. Even Lowell will not speak of these times freely. It takes great patience and proper timing and the right company of a close friend before he will discuss it, and even then it does not come easily from him.

I was determined that I would not leave here without giving it a greater effort. The local gas station attendant directed me to the farm where the airfield once was. There are a few structures, a long Quonset hut and a couple of small rectangular buildings that could have been of military design, but that now house tractors and other farm implements. Mostly it was just farmland, and a couple of barns.

I wandered around and took a few photos, and soon I met the manager of the farm, Russell Thompkins, who was quite knowledgeable about the former life of this place. He confirmed that several of the buildings that I thought were of military origin were in fact from WWII, although their former usage is unknown. He drove with me to the middle of the fields and showed me the remnants of runway 13/31. He showed me how this narrow strip of runway was the center of the old runway, 4 times wider on each side of this center strip, and it was easy to see how the farmland on each side sloped down after the concrete was removed. He also showed me where the landing lights were embedded into the centerline. I reached down and lifted out a loose piece of concrete as a souvenir, for Lowell, thinking of how the tail wheel on his Mustang probably touched down on this piece more than once in those perfect 3-point landings that he does so well even today.

Heading back into town, I met Tony Errington, who is the local liaison for the 357th Fighter Group reunions on the rare occasions when they come to England. The last time that happened was about 5 years ago. Tony told me that the museum did in fact have a small section of it dedicated to the Leiston airfield and the pilots who flew from there. He took us into the remotest corner of the top floor and there among the farm implements was a modest memorial. Some photos and some model Mustangs, and a twisted propeller blade dug out of the earth many years after the crash landing that killed the over-enthusiastic pilot who came in low on his last mission, and in the midst of his victory roll caught a wing tip in a tree.

From Tony, I learned about Gus Clutten. Gus was the groundskeeper on the airfield when it first opened in 1943 when it was used briefly for Thunderbolts. He fired up the ovens for the first meals on the base, and cleaned the drains after rainstorms. He worked there every day the field was in operation. Gus now is still on the base, and at 82 years old, works every day as the manager of a caravan park called Cakes and Ale that is situated on a part of the old aerodrome. He was born in Leiston, and has never left.

At the end of the road that leads into the caravan park, there is the only known memorial to the men of the 357th Fighter Group. It is small, but clean and well tended, with fresh flowers. 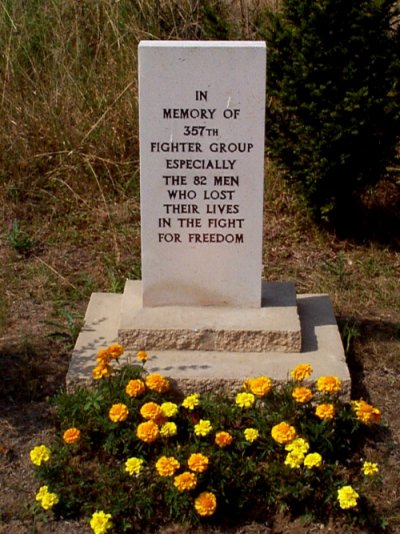 We drove back into town and had lunch in the bar at the White Horse Hotel, which today looks very much like it did when those great pilots gathered here to relax and enjoy some time off.

From there, I motored about 20 miles north to Seething, the site of another airfield where another good friend, Rusty Ruscetta, served in bombers. This field is still operational, but just barely. When I arrived, the office was closed and there were only two small airplanes on the parking area. It was deserted. There was a small monument by the entrance of the airfield, next to a building that could have been built in the 40's and used as a control room. 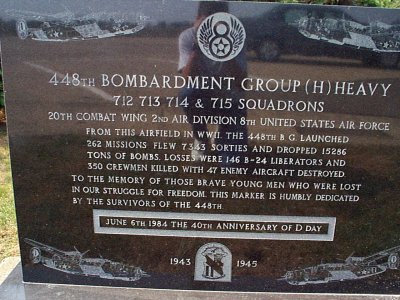 Only one of the original 3 runways is still in use, but it is now much more narrow, and the original concrete is now covered with asphalt. I found a large chunk of the original runway concrete and broke off a smaller piece for Rusty. I took a few photos and headed back to Duxford.

It seems to me that there could never be a memorial big enough to honor and thank all those men and women who served and suffered and died so that we can live free. Whether they served as pilots, like Lowell, or crew, like Rusty, or groundskeepers, like Gus, they united as a team against evil, and triumphed. These people saved our world for the rest of us. What will we do with it, knowing the great price that was paid?