How does one face the day after such a great day as yesterday? One could easily remember it wistfully and hold on to it greedily while letting today slip through his fingers. Another option would be to apply yesterday's lessons to fully living today.

There is a quote which hangs on the wall of my home ("Mikie's Fun House"), and every home I have lived in for the last 20 years:

Look to this day, for it is Life.
The very life of Life.
Yesterday is already a dream,
And tomorrow only a vision.
But today well lived
Makes every yesterday a dream of happiness,
And every tomorrow a vision of hope.


It was written by a Chinese poet more than 1500 years ago, but the message is timeless. Intellectually, I know the truth of it, but I have never found the way to practice it, to bring it into my being.

I have been fortunate to know two people in my 55 years who seemed to me to represent the perfect attitude in dealing with Life. They are both successful, a result of their manner and attitude, I am sure of it, but other than that they are quite different.

One of the most obvious traits of both of these people is that they make it a point to offer a smile and a pleasant greeting to virtually everyone they meet. And it happens automatically, seemingly as a natural, good-natured act, not a contrivance. As you can imagine, this sort of behavior, in many cases is the first step in a wondrous chain of events which no man could possibly presume in advance.

As a proof of this theory, I offer to you the instance of yesterday's greeting by Carolyn Grace (which she initiated), begun with a smile and said simply "I love your airplane". How could anyone not be charmed by such a greeting?

For most of my life I have been a solitary and pragmatic being, living alone most of the time with my head in the computer and going out of my way to smile and greet others only as part of my work, or for some other self serving purpose. I had never been interested in getting to know a person unless I had already judged that they would be worthwhile getting to know, either by reputation, or physical or chemical attraction, or some other external attribute. It has only been since I have met the first of my two special friends that I have even thought that there might be some better way of living. And when I met the second, I was sure of it.

The challenge I have been facing in adopting this open approach to life is a lifetime of habitually exercising the closed approach. But slowly, tentatively, I have been experimenting with this way of being, and it has been rewarding in ways I never would have imagined. First of all, it FEELS GOOD! And not just for me, but it seems that other people enjoy receiving a smile and a pleasant greeting. Second of all, it starts a chain reaction which leads down a magical path.

I hear a distant roar, of what I have come to recognize as the sound of a V-12 Rolls Royce engine, and it has me scanning the sky for its source. Quickly enough I find it, or rather it finds me because it is diving straight at me! It's a SPITFIRE! He's coming in for a high speed low pass. Now, I have gotten rather used to high performance aircraft playing over Duxford airfield in the few days I have been here, but this particular plane is coming in a LOT lower than any I have seen before. In fact, I'm watching him diving toward the field and wondering when he is going to level off, but he doesn't, until the last possible second when his propeller tips are maybe only a foot or two above the ground. He roars down the runway like this, pulls sharply up into a downwind leg, drops the gear, and comes back in for a lovely landing on the grass, taxis back and parks directly across the taxiway from my plane, gets out and walks away, like he has done this before. Wow!

I turn back to reality, and busy myself with my charts, when down from the sky drops this vintage single wing airplane, slipping into the wind for a curving approach to a picturesque landing on the grass. The plane taxis back on the grass and parks in the open space next to my biplane. I take a break for a minute and watch this fellow until he shuts down the engine, unstraps his harness, and pulls of his helmet. He's younger looking than I would have expected of someone flying such an old plane.

In a typical situation such as this, I would never utter the first greeting. I would always hold back and let the other person identify themselves as friendly or not. But for some reason, maybe it was yesterday's lessons still bright in my being, maybe it was just his nice plane, I smile and say something like "Looks like a lot of fun!". And the magical path leads on...

His name is Mark Hanna, (where have I heard that name before?) and we spend a few minutes talking about his plane, a rare French built Dewoitine D27 with a Pratt and Whitney 985 radial engine. 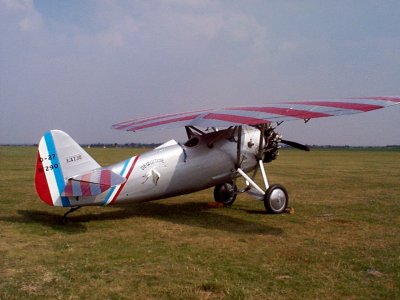 Then up walks another fellow, Ray, (Hey, this is the SPITFIRE pilot!) Hanna (Hey, this is Mark's father!) and we get to talking about my plane and my tour and they suggest that if I would like a place to spread out my charts to do some flight planning, I can use their office in that little building over there, and there's some coffee or tea if I want some, and then they excuse themselves and walk over and disappear into that little building.

All of a sudden I'm thinking I really could use a table to spread out my charts, some place out of this hot sun, and I was probably magnetized by these two guys and wanted to find out more, so I mosey on over and sure enough there's Mark and he sets me up in a room with a great chart table and I'm looking around at all the neat airplane photos on the walls and I'm getting the impression that there's more going on here than meets they eye. And there is. A lot more. Mark Hanna hands me their brochure...

Mark is the Managing Director of the Old Flying Machine Company (OFMC), which owns one of the world's foremost collections of rare vintage aircraft, most notably great piston engined fighters from WWII, as well as some classic and modern jet fighters. Ray and Mark do a lot of air show display flying as well as film work, having flown in most of the European based aviation productions in the last 10 years, including "Empire of the Sun", "Memphis Belle", "Air America" and many others.

Ray Hanna was a military pilot in 1951, flying FR9 Meteors and most of his missions were flown at or below 100 feet (he's gotten lower over the years but I don't imagine he can get much lower than he was today in that Spitfire). He was also the leader of the Red Arrows (like the Blue Angles in the US) from 1966-69, then went on to a civil career with Boeing 707's and Lockheed L-1011's.

Mark Hanna was taught to fly at age 16 by his father and joined the Royal Air Force at 18. At 21 he was flying F4 Phantoms, and has since flown more than 60 different types of aircraft in 4000 hours of flying, half of which is in warbirds.

I don't know about you, but when I get to meet people like this, I just want to breathe the same air they do. Maybe I'll learn something.

Mark takes a minute to introduce me to Caroline who holds the OFMC together on the inside, dealing with the phones and paperwork and who knows what else because as soon as I meet her I'm on another planet because she is one of those rare people with a natural poise and grace and loveliness that leaves me either speechless or babbling. She would just as soon jump out of a plane (skydive) as she would fly, and she wears a neclace with a bone colored Jonathan Livingston Seagull with outstretched wings. I'm smitten, and would like to know more, but I'm sure that's a common reaction with people who meet her.

Then there's Wayne Fuller who's working his way up the flying ladder at OFMC (can you imagine learning to fly these great planes with Ray and Mark and getting PAID to do it? where do I apply?) and we get to talking and I find out he has an ultra-light (airplane) in his living room. He quietly demonstrates just how sharp he is by producing copies of some WWII airfield layouts he heard me mention to Mark that I was interested in checking out.

I'm talking with Wayne when in walks Peter Leggo (no, he didn't invent the toy), who is a geology researcher at Cambridge and he has built a lovely little biplane, a Pitts Special, from plans, and flys it, and that's an achievement that is completely beyond my imagination.

I have been extremely fortunate to have met some extraordinary people today, and it all started with a smile and a pleasant greeting. Try it yourself and see what happens.