So THIS was the morning I was supposed to go flying at Duxford. Last night I had no alcoholic beverages at dinner, and got to bed early, fully preparing myself to have a good bit of flying in the early morning. NOT!

When I arrived at the airfield at 8am sharp, expecting to be one of the first to fly when the place opened, I was the only one there! It was like a ghost town. That's when I consulted my airport directory to find that the airfield opens at 10:30am. What a bummer! I was sorely tempted to just jump in and go flying. The grass strip looked great, the pattern was empty, the sky was blue and there was a challenging 90 degree wind kicking up which made me want to practice some crosswind landings on grass. Very tempting.

And then I thought better of it. This is a private airfield, not public, and I suspect that it is not allowed to use it when it is closed, but there's nobody around to ask. That old saying is rattling around in my head: "It's better to ask forgiveness than it is to ask permission", and maybe I'm just being conservative, but it doesn't seem applicable in this instance. I figure that if I do something stupid here/now it might hurt my chances of flying in the air show here in September. As disappointing as it is, I walk away.

Yes, I could have waited until they opened, and then gone flying, but I had already made plans to go to Cambridge, just to the north of Duxford, with some friends I met while touring the Taittinger Champagne caves in Reims, France, just a couple of weeks ago. Sandra and Keith Stillton live just outside London and had invited me to join them and their friends Mike and Sue, for a verrrry British afternoon of punting and picnicking in Cambridge.

Punting, for those of you who haven't (and I certainly hadn't until today), is a peculiar mode of transportation whereby the method of propulsion is a long pole poked into the river bottom whilst standing on a small slippery deck at the back of the flat-bottomed boat. The boat is the thing called the punt, I believe, but it just may be the pole, which goes to show you how much I know about punting. However, I can tell you this: I spent at least 2 hours in the boat, and watched carefully the many other punters on the river, and I can say without reservation that this is certainly a most ridiculous method of getting from A to B.

First of all, nobody I saw in the puntor position (actually sticking the pole in the water and shoving off the bottom) seemed to have the hang of it. It must be incredibly difficult to steer one of these things because it has no rudder, just that damn 15 foot long wooden pole. I KNOW it must be difficult to steer because we rammed into half of the boats on the river. The other half of the boats rammed into us! And during all of this, we rammed into the shoreline more often than not. I was beginning to think that this was some form of aquatic bumper-cars, but these people were very serious about trying to steer straight, and seemed quite embarrassed with all their banging about.

I should say right off that Keith, our primary punter (pole man) did an admirable job, keeping us from ramming the OTHER half of the boats, but the river is so narrow, and it was so crowded, that we just had no room for evasive maneuvering.

Here's a photo of Sandra in the pole position, with Keith helping with a paddle, and Mike saving his energy for his go at it. The sharp-eyed viewer will notice that we are temporarily pointed perpendicular to the river, not a good thing, despite the best intentions of Sandra and Keith. 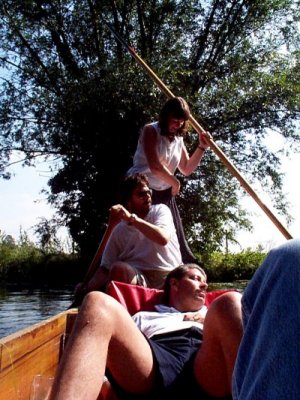 In one of the more peaceful moments, Sandra feeds a piece of baguette to a duck, who could swim much faster than we could punt.

After punting up-river for an hour, we off-loaded the picnic baskets and Sandra spread out the blankets and the delightful lunch of cheeses, fruit, ham, wine, and desert. It was simply marvelous sitting in the grass, under the shade of a tree, sipping some wine and talking very British, you know. Every once in a while one of us would pop our head up to look over some bushes just to be sure that our pole was still around. It must be jolly good sport to steal someone's pole while they are not looking.

Actually, the boat comes with a backup system in the event of a lost pole: a paddle. It seems that a lost pole can also occur from natural causes, such as when it gets stuck in the mud at the bottom, the boat continues to move forward while the puntor tries in vain to pull it free and it finally slips out of their wet grasp. This leaves the puntor without a pole, and the paddle is the only way to get back to the pole.

Another way you can lose your pole is much more traumatic. There are several very low bridges along the Cam river (hence the name Cam-bridge, get it?) which are so low that the puntor must duck down to get under them. If his timing is not just right, the pole may be stuck in the bottom on one end, and the other may be sticking up higher than the low part of the bridge. The boat continues forward, and, as in the previous scenario, boat and pole are rudely separated. If his timing is completely wrong, it is just possible that the puntor will be separated from the boat as well and left hanging on the pole.

It is difficult for me to imagine how this punting thing has survived. Surely it must have been one of Early Man's earlier modes of water travel, and just as surely he must have quickly invented the paddle which could be used while sitting down (eliminating another danger of the punting experience: slipping off the wet deck). So when we got into the paddle thing, why keep punting about? Maybe because the English are just SO into the tradition thing. (Maybe that's why they cling to separate faucets for hot and cold water.) And when the outboard motor came along, you would think they would have reconsidered the pole concept. But nnnooooo...

There was one more aspect of this punting experience which I didn't expect. On the way back down river, we came round a bend where lots of pre-pubescent children were swimming and playing in the water. Lots more were playing on the banks of the river. A few were swinging on a rope, starting on the bank and lofting themselves out into the water. And some were even in the trees, jumping into the river. What a lovely scene of young children frolicking in the water on a hot weekend afternoon. Then it all turned very grim...

These little buggers started dive bombing us with their bodies! Out of the trees they dropped and hit with great splashes which covered us with water. Then more came running from the shore, taking long leaps in our direction and cannon-balling us with sheets of water. And just another 50 feet or so and we had to run the gauntlet again. We had no choice but to pass under one of those low bridges, and above us they were standing at the edge like buzzards waiting for their turn at us. We got drenched! Of course they thought it was great fun, and secretly so did I, knowing that I would have done the same thing if I had the chance.

Here's a photo of the first of them coming out of the trees. One has just gone into the water, another has just jumped from one of the higher limbs. 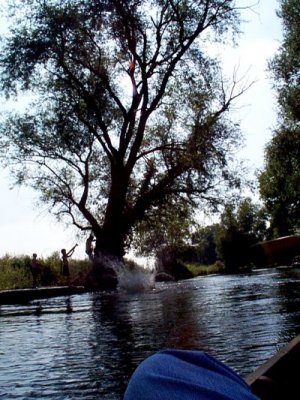 I would love to come back here with a proper punting machine, with a hidden motor and rudder for fast evasive action, and a crew of pirates hidden under a tarp who would leap up at the last minute and shoot high-powered water guns filled with permanent ink which would turn these little demons PINK! Now that would be a great sight! I'd love to see the looks on their faces when the tables were turned.

And then, being the entrepreneur that I am, I reconsidered the revenge motive and thought like a capitalist. It would be much better to stage a punt before the dive bombing area, and sell "flood insurance" to punters heading into the danger zone. Purchasers of the insurance would be assured safe passage by displaying some sort of sign on their boat. The proceeds would be split with the kids, God bless them, and everyone would be immensely happy.

Punting is one of those things which you really should do. Once.