Before I went to sleep last night, I had the thought that I would go flying in the morning, probably just a trip to the coast and back, or maybe some "circuits and bumps" as the British call touch and go's. I wanted to get there early, before there was a lot of traffic in the pattern. Unfortunately, my morning ambition was not as strong as my vacation spirit, and I slept late. There is always tomorrow...

The real main priority for today was the full investigation of the "Imperial War Museum" (not a very pleasant name, is it?) at Duxford airfield. It is difficult to come up with enough of the right superlatives to describe this place. Today I visited the new American Air Museum, which is just one (very large) building on the grounds. There are seven large hangars and many smaller buildings which comprise the entire Imperial War Museum at Duxford. A thorough visit could take a week!

The American Air Museum houses an awesome collection of some of the finest aircraft ever assembled under one roof: The huge eight jet engined B-52D Stratofortress is the center of the collection, and everything else is grouped around, or suspended over, it. Just to name a few: F-111, C-47, A10, P-47 Thunderbolt, U-2 spy plane, B-17 Flying Fortress, T-6 Texan, PT-17 Stearman, P-51 Mustang, the monster B-29A Superfortress, T-33 jet trainer, B-25 Mitchell, TBM-3 Avenger, F-86, Huey helicopter, a collection of mobile missile launch vehicles including the SAM and Cruise, a section of the Berlin Wall, a collection of aircraft engines, various video taped exhibits, a collection of uniforms and other memorabilia, and lots more.... all under one roof! Amazing.

One of the displays featured the life of a fighter pilot. Here are the words: "The public image of the fighter pilot is that of a dashing aerial knight whose prowess was assessed by his score of enemy victories. In reality, the majority of US fighter pilots flying over Europe never had the opportunity to engage in Air combat! The fighter pilot experience of war was one of lonely fatigue, strapped in a small noisy cockpit for 3 to 7 hours at a time. To survive it was necessary never to neglect monitoring instruments and to scan the sky constantly for the enemy. The task that took the lives of most fighter pilots lost in combat was ground strafing of heavily defended enemy installations. Overall, with enemy action and accident, the fighter pilot's chances of surviving a 300 hour operational tour was no greater than that of a bomber crewman."

I continue to meet extraordinary people. Today I had the good fortune to get to know Les Batt and his brother Keith, who flew in to Duxford in a very old DeHavilland DH82B Queen Bee, which looks almost identical to a Tiger Moth, but was built originally to be a radio controlled target! 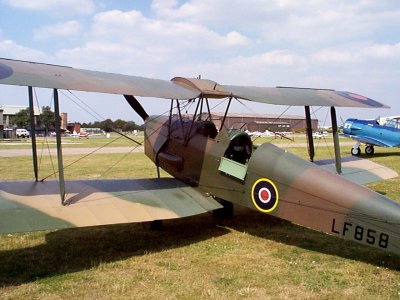 It is the only one still flying in the world. Les is quite the character. He gave me his card, and it reads "Dragons Slain, Maidens Rescued, All Round Good Egg, Never Fails To Buy His Round, Les Batt". Les and Keith flew in from about 20 miles south, on a shakedown cruise in preparation for an air show tomorrow. I sat in the cockpit for a few minutes to get the "feel" of the plane. It has an extremely short travel for the rudder pedals, and Keith admits that it is very "twitchy" in the air, requiring constant attention. The plane has no tail wheel, only a skid, and no brakes, so they must land on grass.

Note the very simple (except for the GPS!) control panel. 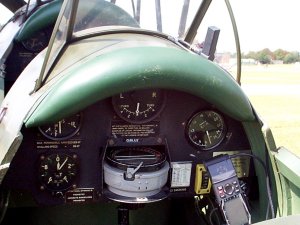 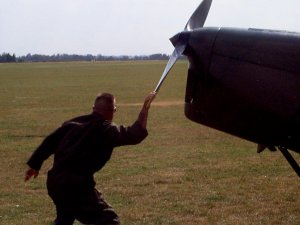 Les on the left, Keith on the right: 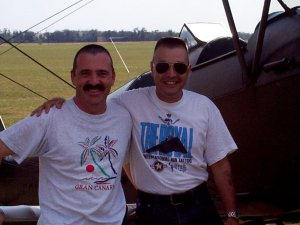 If I didn't get to fly my biplane today, I had to make do with getting a ride on one. Not just any biplane, but one of the prettiest twin-engine biplanes ever to take to the air, the 1934 DeHavilland Dragon Rapide. 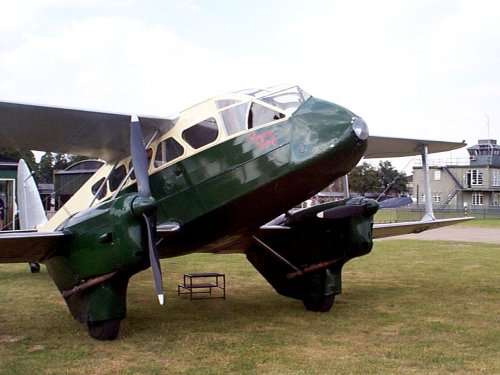 Unfortunately, it allows only one pilot, there is no co-pilot seat, or I would have begged some stick time to bolster my meager multi-engine time. However I was fortunate enough to get the seat directly behind and to the right of the pilot so I could see everything he was doing, and had a great view forward during takeoff and landing, as well as excellent views to the sides. Taking off on the hard surface and climbing out, I very distinctly got the impression this was a very solid and capable aircraft. We went for a tour of the local area for about 10 minutes and came back to make an excellent smooth landing on the grass. A delightful machine in every respect. A twin engine biplane! That's a first for me!.

I spent the entire day at the airfield and haven't begun to see everything on display. I can't wait to go back for more!