One last walk on the beach at New Romney, then a quick taxi ride to the airport at Lydd, and before too long I was rolling down runway 22 in calm wind and into a clear sky. The weather was completely un-English, it was delightful!

It was an easy flight to Duxford, only about an hour, including a little bit of time to fly over the coastline and do some exploring. There is grass and hard surface at Duxford, so you know I took the grass. What a great feeling it is to land on grass!

Duxford is a historical landmark, a national treasure. This airfield was established in the FIRST World War and has been active ever since. I had been told by many, many pilots over the last few months that if I only visited one airfield in England, then it should be Duxford, but I really had no idea what to expect. In fact, this place is mind-boggling.

I had just parked the Waco when a fellow came up to me and mentioned that there was going to be an air show here at Duxford on the 7th of September, featuring American aircraft, and would I like to participate in a fly-by? Oh boy would I! What a wonderful way to spend my birthday! He said he would check out if it was possible under UK Civil Air regulations for me to participate without having a special air show license. (Hopefully my new friend Barry Tempest, who is the head of the Sport Aviation Safety department for the UK Civil Air authority, can help with this! Please?) So I'm not on the ground more than 10 minutes, and already I'm really getting to like this place.

The first thing I did on landing was to make the obligatory visit to the control tower and pay my landing fee (6 pounds sterling, about $10, which was cut in half for me, presumably because I'm flying a good-looking biplane).

Walking back to the plane, another fellow (Klaus) came up to me and asked me if this was the Waco from Germany. I figured he was talking about my first Waco, the one which my flight instructor had flipped on the runway in Carlsbad, California, when he landed with the parking brake on. The plane was completely destroyed, and I turned in the parts and the insurance payoff and took delivery of a new one which looks identical to the original. The Waco factory rebuilt my old pile of parts and sold it to a fellow in Germany. So this guy Klaus, who comes up to me in Duxford, asking if this is the German Waco is actually the instructor who taught the German how to fly his (my) Waco! Is this a small world, or what! Better yet, Klaus is just about to leave on a low-level film mission in one of two P-51 Mustangs. So I drop a few Mustang names, who he happens to know also, and then let it slip that I have a few hours in a Mustang. Who knows, maybe I'll get a ride! (I can dream, can't I?)

Next priority was to get a hotel for a couple of days. I wanted to find a place as early as possible because the places around here could fill up fast with the weekend coming up. I found a 3-star place, with shower, just a couple of miles away, the Duxford Lodge. A quick shower, and then back to the airfield to check the place out.

This place has a Concorde on display! And a B-52! And Mustangs, Spitfires, and all manner of Warbirds. There are 5 monster hangars full of perfectly restored aircraft, and the jewel of the airfield is the new American Air Museum which opened just two weeks ago, and the Queen herself came to dedicate the place. The American Air Museum houses the B-52, and F-111, a B-29, B-25, Mustang, Stearman, T-6, Spad, and a dozen other aircraft, all under one roof! It was too hot inside for me to stay around. I think they need to sort out their air conditioning. I'll go back in the morning when it's cooler.

The highlight of the day was when two P-51 Mustangs rolled town the runway in sequence then formed up on the downwind leg and made a low pass before going out for a low-level film mission. 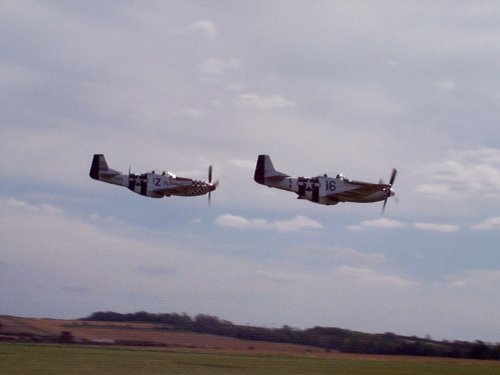 What a sight! An hour later they are back overhead, circling the field to get everyone's attention, and then proceed to do formation loops, rolls, and wingovers! It was a great impromptu airshow, with the best airplane ever made! I was right with them every step of the way. I was inside those planes, at the controls, flying every inch of the way. I can say that because I have actually done these aerobatics, and more, in a P-51 Mustang and it was one of the greatest thrills of my life. That machine is so smooth, yet so very powerful, that it does everything effortlessly. The fact that it looks so beautiful and sounds so awesome (V-12!) just adds to the mystique. It is incredible that this perfect airplane was built in just 117 days from the first pencil sketch, and it turned the tide of the war in Europe. A legend, and an inspiration.

Later in the day, I was buying a cold drink at the restaurant, showing up at the cashier at the same moment as a lady who was buying the same thing. Just on a lark, I told the cashier I would pay for both. The lady was pleasantly surprised, thanked me, and we both left in opposite directions. About 10 minutes later, she found me and offered me a baseball cap with the Royal Air Forces Association logo, in blue! Well, sure! I'm thinking I got the better end of this trade (which I hadn't intended to be a trade), so I started talking with her and we found our way back to the table where she was sitting with her husband and some friends. It turns out that Jerry, Elbert, Joyce and Jean are all retired, now involved in fundraising to help British war veterans, but for today they are just taking the day off and enjoying Duxford. And by the way, would I like to attend the airshow next weekend at their local airfield at Clacton-on-Sea, just an hour away!

We are sitting there having a good chat when a Spitfire rolls down the runway, lifts off just slightly, raises the wheels, keeps low to build up speed, then pulls straight up revealing the most beautiful set of wings ever put on an airplane. He then proceeds to roll out at the top and continue to play right over the runway for the next 15 minutes, doing all manner of aerobatic maneuvers and we are all just loving it.

The thing that should be remembered is that the shows put on by the Mustangs and the Spitfire are completely unplanned, unscheduled, not for any other purpose except for the pure fun of it. People are not here expecting this sort of thing, but it sure is happening. What a great place this is!

I have booked a room for several days, because I really want to see this place in detail.