Today was certainly one of the highlights of this tour. I had the opportunity to visit with a good friend from the TeleMagic software days. Tricia Gregory is a person of extraordinary wit as well as exceptional talent in business. She was the distributor for TeleMagic software in the United Kingdom until The Sage Group purchased my company in 1992. We have continued to keep in touch by phone and email, but I haven't seen her since before the sale.

Here's a photo of Tricia with her Jack Russel terrier "Dog", a name which gives you some indication of the nature of her good humour. 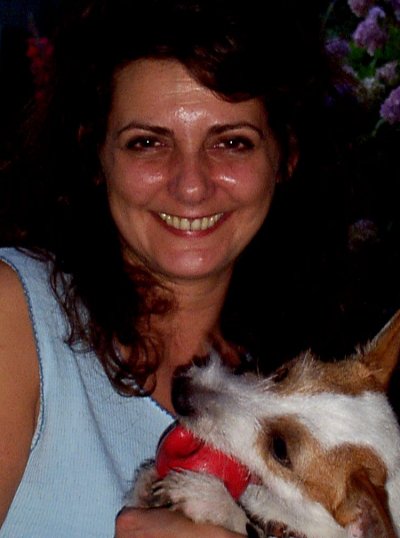 Getting to her place in the north of London was an adventure in itself. The London Underground ("The Tube") was crowded, hot, humid and dirty. I admit I was a bit apprehensive about it, thinking it was a lot like New York City subways, but somehow I survived the experience.

Tricia picked me up at the end of the Picadilly Line, and we drove to the home she shares with Keith, her significant other. There I met Keith and his business associate Arthur and the four of us drove on to their favorite private pub "The Conservative Club". This is indeed a very private club, and in order for me be there I had to sign a document which specifically prohibited me from buying anything while there. What a great place! I can drink all the Guinness Stout I want, and they won't let me pay for it!

Have you ever played Snooker? Well I hadn't either until today. In all the 40 years I have been playing pocket billiards (pool), I had never even seen a snooker table. They are HUGE compared to your standard pool table, and the pockets are smaller, which means that it is a much more difficult game. I would admit to being a pretty good pool player, but I was humbled today. And with the increasing effects of the Guinness, you could say that I was humiliated. I need some practice!

Let me introduce you to James, a young lad who took over Tricia's place on the opposing team in the game we played. He has a most confident manner about himself which I found to be amazing. He is destined for greatness. 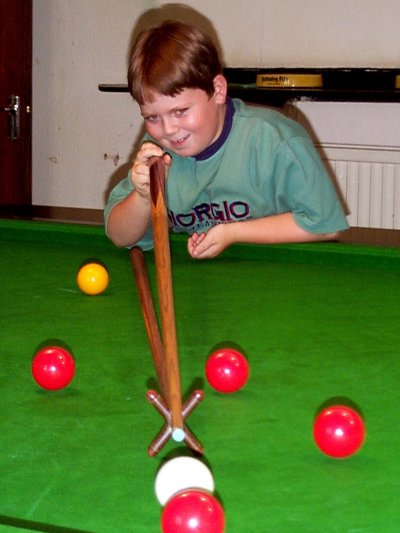 Another future great is Victoria Punt, a young lady of uncommon beauty, who proceeded to dazzle me with card tricks while getting me to lose a few quid and feel wonderful about it!

I had a great time at The Conservative Club, and after a few pints of Guinness, it was time to leave while we were still behaving somewhat conservatively. It was a fine taste of English culture, it was. I met some really interesting people and had a lot of fun. We returned to Tricia and Keith's place, and continued to talk and drink and eat until it was almost tomorrow. I'm sure we solved all of the really important issues facing the world, but I know I'm not going to remember the solutions tomorrow. Pity.

The best part was to see and spend some time with a good friend I haven't seen for too long. The day before I visited Tricia, this little poem came to me in the email. It got me to thinking about how really important it is to keep in contact with good friends, and so I'm sharing it with you:

Around The Corner:
By Henson Town


Around the corner I have a friend,
In this great city that has no end,
Yet the days go by and weeks rush on,
And before I know it, a year is gone.
And I never see my old friends face,
For life is a swift and terrible race,


He knows I like him just as well,
As in the days when I rang his bell.
And he rang mine
if, we were younger then,
And now we are busy, tired men.
Tired of playing a foolish game,
Tired of trying to make a name.
"Tommorow" I say "I will call on Jim"
"Just to show that I'm thinking of him."


But tommorow comes and tommorow goes,
And distance between us grows and grows.
Around the corner!- yet miles away,
"Here's a telegram sir"
"Jim died today."
And thats what we get and deserve in the end.
Around the corner, a vanished friend.