Late yesterday afternoon, I helped Mattias wash his plane, then shook his hand and said "Thank You!" for being such a great wing man for the past several weeks. He is extremely knowledgeable about the various customs and procedures regarding flying in Europe, and he can speak several languages. He has been a terrific help, and I'm going to miss his companionship as well. Now I'm on my own. Here's the man and his airplane: 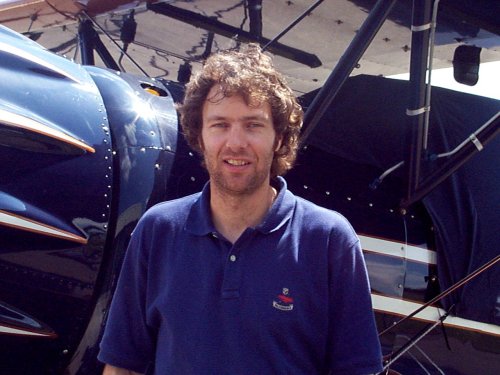 Today, I was up at 7am for an early start, the necessary ingredient to go flying before the heat of the day spawned unwelcome thunderstorms. Everything went according to plan this time. I took off from Donaueschingen Germany into a light wind with a high ceiling at more than 10,000 feet, more than enough to allow me to cross the mountains to the west at only 4500 feet. The first part of the flight went very well.

However things got plenty stressful when I crossed the border into France at Colmar. This part of France is crisscrossed with lots of restricted military areas which should not be entered without first contacting the controlling authority on the radio. And that was the problem. My radios. They have developed an increasingly bad noise problem which is intermittent. I had a mechanic check them out, and he found a loose ground, but it hasn't cured the problem. I can still transmit perfectly well, but hearing clearly is sometimes difficult. When you add to this the already difficult time I have with foreign languages and accents, and my lack of familiarity with the convoluted airspace and the general topology, you get a scenario which is just about as nasty as I have had to deal with.

For the entire duration of the flight from Colmar to Rheims, about 90 minutes, I was switched back and forth between various controllers, both military and civilian, close to two dozen times. Each time I had to get used to a different accent, some of which were just plain unintelligible, and more than once I just told them where I was and where I was going, period. I got tired of saying "Say Again"? I left it up to them to deal with it. I figured that if I was committing some horrible violation of their airspace they would scream at me, so without hearing anyone screaming, I just kept on going while keeping an eye out for hot-rod fighter jets.

Several times in the flight I had to change course around some clouds which were building up into thunderstorms, or climb up over them, and I'm sure that gave the controllers fits trying to keep track of me. I probably had every controller in western France rerouting traffic around "that crazy American biplane pilot".

Within 60 miles of Rheims, the clouds started to form below my altitude, going from just a few clouds when I started out, to a scattered base in the middle of the flight, to a thick broken layer close to my destination. When I got to 20 miles from Rheims, I figured I had to get under the clouds right away, or I wouldn't be able to get down further on. I chose a hole and dived into it, losing 4000 feet in little over a minute. What a rush! The visibility was excellent and the air was cool on top of the clouds, but when I popped out underneath, it was a shock to see how poor the visibility had become, and the air was hot and humid.

For the next 20 miles I was bumping along at only 1200 feet above the ground, looking out for towers in the murky unstable air, while trying to stay on course and keep in communication with the Rheims information frequency. At the very last possible moment, the runway appeared right off my left wing, and I was in perfect position for a short left base entry. Although I had already been cleared for landing (I was the only one in the pattern), I was probably a little too greedy to get down fast so I pulled the power and put the Waco into a radical slip to lose altitude, but it wasn't going to happen fast enough, so I firewalled the throttle and went around, this time doing it right, and touched down gently for a sweet ending to a stressed out flight. Whew!!

Rheims is a great city. My first stop was the cathedral to say thanks for my safe arrival. This awesome, yet unfinished, cathedral was built in 1211 and has been the site of the coronation of every French king, except two, since they started having kings in the 10th century.

Here's the center city carousel (unusual for its double-decker architecture) which kept me company during lunch: 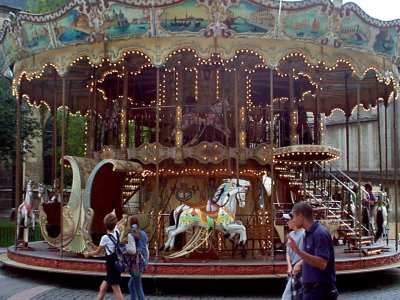 The area surrounding Rheims is Champagne territory, so I had the chance to tour the Taittinger Champagne cellars. Here they have 3 million bottles stored in the limestone caves originally built by the monks who first developed "champagne". The highlight of the tour, of course, was the complimentary glass of Taittinger bubbly. Yummy stuff!

There are more than enough champagne bottlers here in Rheims to keep me busy with tours, and free samples, for a week. So this is one time I won't be too disappointed to see rain in the forecast. And the food is absolutely superb! Tonight's dinner was the best meal in weeks.

The forecast, by the way, IS for rain tomorrow, but clear and sunny on Friday. If things go as planned, I'll be crossing the English Channel soon.