While waiting for the weather to clear so we could take off, we took a taxi tour of Nordhausen (Germany) to learn more about the place. We found out that Nordhausen was a separate nation/state from 1220 to 1802, then became part of Germany. It was the 3rd largest city in East Germany, behind Berlin and Dresden. We talked with several people in town about how their lives were affected by the end of the Cold War and the reunification of Germany. The general consensus is that people are having a hard time adjusting to the new scheme of things. There are lots more choices in the stores, but they don't have the money to buy the stuff. Under the old system, the government had everyone working, and earning a wage they could (barely) live on. They could depend on the government, but they didn't like it because they had no freedom. Now they have the freedom, but not the money to go with it and they have to depend on themselves, not the government. Although it is challenging, they prefer the new way.

We arrived at the airport at Nordhausen as it was clearing to the south. We needed fuel (there is none at Nordhausen) so we planned to go just a short distance to Erfurt?. The sky conditions were marginal, flyable but not great. We figured that we would make it to Erfurt which has a meteorological service and we could get a better idea of the weather en route to Donaueschingen, about 200 miles to the south.

The flight was an easy one, and after landing, we took on fuel and lunch and the latest weather information. The lady at the weather info desk, after learning of our hoped-for destination, suggested that we would enjoy staying in Erfurt! The conditions were classified as "Difficult" and indicated that we would have a probability of rain, drizzle, and ceilings as low as 500 feet. Not a pretty picture.

Mattias has flown this territory before and he is familiar with the accuracy of these weather forecasts, and his suggestion was that we go fly and have a look. The conditions at Erfurt were good, even considering the towering cumulus in the area. We could see at least 6 miles in the direction we wanted to go, so we went for it.

It turned out to be one of those dream flights where everything went amazingly well. As we crossed over each new range of hills, and it looked as if we might hit a wall of clouds and have to divert, the closer we got the more the clouds parted and let us through. Only once did we hit rain, and it was negligible. When we hit ceilings which were too low over the mountains we were crossing, we simply sidestepped into a valley running in the direction we needed to go. It seemed just too simple and I was waiting for things to go wrong at any moment, but for some strange reason, they didn't.

I never thought we would make it 30 miles on this trip, but we completed the entire 200-plus miles without much more than a few bumps. In fact, because of the solid overcast, it was quite smooth.

Here's a photo I snapped showing a rare patch of sunshine far out on the horizon off my right wing, and the very low overcast that we flew just below, so as to have enough ground clearance to avoid any surprises by radio towers lurking in the reduced visibility... 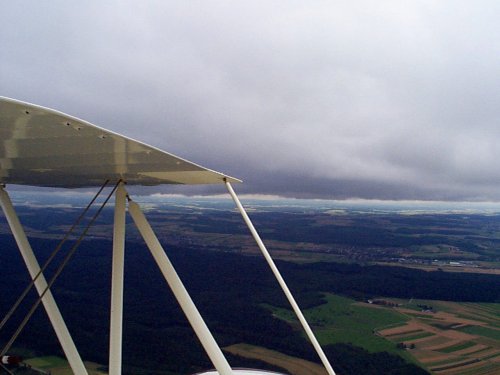 When we got within a few miles of our destination, and I could see that we weren't going to get hit with some last minute rainshower, I had to keep myself from getting too excited about our good luck. "It ain't over till it's over", I kept telling myself. In fact, all my troubles came at the end.

My landing was disgusting. For some reason, I had gotten myself so completely out of shape that I actually started laughing at my predicament at the same time I was struggling to regain control. There was never a moment when it was dangerous, just very strange and awkward, a ridiculous landing for someone who has performed this delicate maneuver over 1600 times. You would think I would have it down by now. And I really can't say why it was so bad. The wind wasn't that bad, but there is always the chance of a rogue gust that comes out of nowhere and humiliates even the best of pilots. Who knows.

When the driver of a car winds up in the weeds, or hits a parked car, he usually claims that he swerved to avoid an animal (long gone by the time the police show up). And so, when a pilot's landing is less than adequate, it is sometimes blamed on a "runway snake".

Yeah, that's the ticket! It was a runway snake! A big sucker, he was!

Donaueschingen, Germany is where Mattias hangars his Waco. It's about 90 minutes by car from his home in Zurich, Switzerland. Tonight both of our biplanes are safe and snug in his big hangar. Mattias' wife Nici drove out to pick us up and drive us back to their home outside Zurich. We weren't 10 minutes away from the airport when the sky went dark, the clouds reached the ground and it rained like mad.

How lucky can you get?