I had more fun behind the wheel of the Z-3 this morning on the Autobahn from Hamburg to Lubeck. What a great idea: No speed limit. Actually there are speed limits on the Autobahns, but only in congested areas around larger cities. The rest of the time it's just a free for all!

It was raining in Hamburg this morning, so we really took our time getting out of the hotel (Hotel Steinenberger, really excellent). We did our typical formation takeoff from Lubeck in the early afternoon, and the sky was already showing major sections of blue, so we figured it was going to be an easy flight south to Leipzig. NOT!

It was clear and smooth for a while and I had a chance to get real low over some farmlands and get to see and smell the countryside up close. But it didn't last very long. Here's a photo of Mattias' plane, with lake, farmlands and some low clouds, before the sky fell even more. 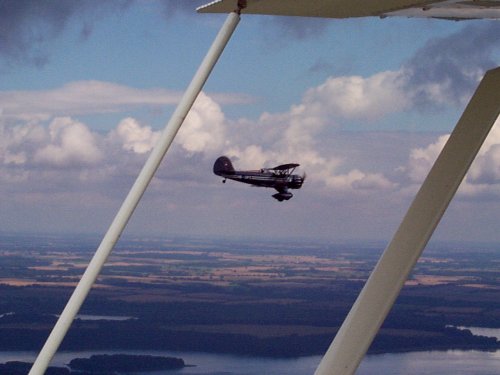 We didn't get far before the a large dark rain cloud formed on our right, so we deviated left from our course for several more miles. Then we came upon an even larger and darker rain cloud to our left. Both of these masses were raining very hard, and visibility was zero all the way down to the ground. There was no way we could get over them. The only solution was to turn around, or go for the lighter slim alley between them. We went for the light. Even then we were hit with considerable rain, and I kept looking over my shoulder to make sure that we could turn around if the way ahead was blocked.

We kept flying like this for another hour and a half, dodging around or between angry looking local storms, but all the time we were having to deviate from our course line to the west. Soon, Leipzig was no longer an option. The storms were pushing us up over the mountains to the west of Leipzig, so we started looking for an alternate. Mattias' GPS showed an airport 20-plus miles more to the west, but I was concerned we might head into another storm since the weather was coming from that direction. I opted to land at the nearest opportunity, a little grass strip only 8 miles ahead, where it was clear at the moment. Our info showed that no fuel was available at this strip, so we agreed that we would just land and wait out the storms, continuing when (if) it cleared up later in the day.

We were really fortunate to find this grass strip. The runway was perfectly aligned with the wind, which was really kicking up at the time we landed. It was even a good bit uphill which, with the wind, helped us roll to a stop quickly. And that was a good thing too because the runway was pretty bumpy.

We pulled off to the side of the runway and waited. On the other side of the field were half a dozen people and two gliders, taking turns launching their gliders with the rope winch. Soon a couple of them came over to inspect our biplanes.

One of our hosts was an attractive young lady named Katrin Breitrueck, an aeronautical engineering student at the University of Stuttgart and holds licenses in gliders and motor gliders. Last summer she flew with a friend from Canada to Florida. She was here on break from school, for a week of gliding fun with some friends who were members of the local flying club. She speaks English very well and was very enthusiastic about the biplanes, mentioning that it reminded her of Richard Bach's book "Biplane". Here's a photo for you: 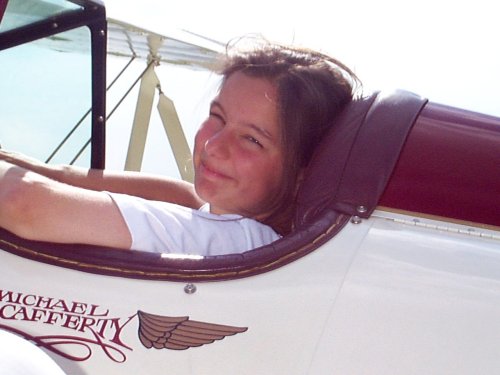 Today was a big occasion for one of the members of the local flying club. It was his day to do his 3 solo flights, after which he gets his solo glider license. We watched all 3 and he made flawless landings each time. Good show. Afterwards there was a party in his honor, and Mattias and I were invited to attend. It's the custom around these parts that when someone achieves their solo privileges, they must be paddled on the butt while holding a large handfull of sticker-weeds! 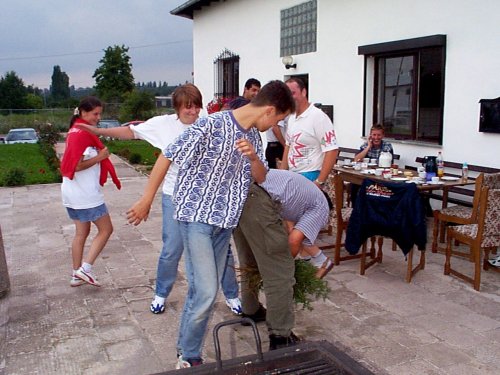 I like our customs better. When I soloed in gliders they only dumped water on my head, which I really appreciated because it was such a hot day.

It didn't look to me like the weather was going to get much better, so we decided to stay over in Nordhausen. One of the members of the flying club offered us a ride into town (about 50,000 inhabitants), and to the "good" hotel.

It wasn't until we were in the car and driving through town that I noticed that something seemed different about this place. I couldn't put my finger on it right away, but it finally dawned on me that this town was in the former East Germany, only 12 kilometers from the border. Until only 10 years ago, this was Communist territory, and these people had none of the freedoms which we take for granted.

There was still some evidence of the old ways. I saw my first Trabant automobile, if you can call it that. It is one of the worst cars ever made, and went out of business soon after real quality cars became available when the Berlin wall came down. Somehow, it was still clunking along, but just barely, and it was the only one I saw on the road.

The hotel was a pleasant surprise. I was kind of expecting some real dingy digs, but this place was completely gutted and totally refurbished. Everything about it was brand new and first class, a complete turnaround from the days of Communist rule.

If we are lucky, the weather tomorrow morning will be good and we may make it as far as Mattias' home airport in Donaueshingen, Germany, just north of Zurich Switzerland.