The sky was so blue and clear this morning I just couldn't wait to get to the airport and fly. However, nothing in aviation happens very quickly, so it took more than three hours to go through the morning shower/shave ritual, eat breakfast, pack, taxi to the airport, remove the tiedowns, load the baggage, refuel, add oil, pay for the landing fees, get the weather, file a flight plan, select the charts, preflight, and then sit at the end of the runway and wait while half a dozen other planes take off and land ahead of us.

I am dragging you through all of this drudgery so that you will more fully enjoy the bright spot in the middle of it all. While we were refueling, two young boys stood watching us, about 100 feet away. It was obvious that they were fascinated with our planes, possibly never having seen such flying machines before. But while they were very attracted by the planes, they seemed very timid about coming much closer. So after a few minutes of watching them watch us and the planes, I waved hello to them, and they half-waved back, still very shy.

I waved again, this time with a "Come on over and see the planes" kind of wave. They stepped closer, still wary, and whispered between themselves, walking around the planes and pointing. "Do you speak English?" I asked. The redheaded boy shakes his head NO. "Do you like airplanes?" I asked. "Oh yes" he says. (seems like he does understand and speak English after all!)

I was pouring cans of oil into my plane, so I asked Mattias to help them get into my cockpit, one at a time, so they could see what it's like in there. First to get in was Mikkel, and it sure seemed that he enjoyed it. Then I said to the redheaded kid "OK, you're next!", and he shakes his head NO WAY! Now I have seen enough young boys hanging around this plane to know that when they say NO it really means OH BOY! So Mattias helps Christian up on the wing, then into the cockpit, but instead of putting his first leg on the seat, he puts it on the floor, and falls way down in, leaving only his trailing leg sticking up out of the cockpit! We all got a great laugh out it. What a great picture that would have been, but I didn't have my camera ready. Here's a photo of Christian, aviator of the future, loving every minute of it:

I think we made a couple of Danish kids happy this morning because after Mattias and I came back from the airport office where we paid for the fuel, they came up to us and gave us each a set of decals, 4 different sizes, with the logo of the local flying club. What a great present! We thanked them profusely, making a big deal of it, and asked them to be sure to watch our formation takeoff. (As if they would miss it!)

And so it was that when Mattias and I charged down the runway, side by side in our magnificent open cockpit biplanes, at Roskilde airport in Denmark, there were two little boys sitting by the side of the runway watching our every move. And you just know, that when our wheels lifted up off the asphalt, and our planes climbed into the air, that those two little hearts beat faster and their spirits went flying with us, and stayed with us until we turned south and disappeared into the distance.

Mattias and I figured we would head back into Germany, a town called Lubeck, northeast of Hamburg. The weather for today was perfect, but a storm front was moving in from the west and it was forecast that we would not be flying tomorrow, so we wanted to be in a big city for our day on the ground. But for today at least, we are on the beach here in Gromitz, a sleepy little seaside community, where we drove in our rented BMW Z-3 roadster, red of course, with the top down.

We did a lot of over-water flying today, and I made a wrong turn but discovered my error before too long. Everyone has made a wrong turn in a car and thinks nothing of it, but when it's done in an airplane, it seems a lot more unacceptable for some reason. Maybe it was because I was focused on taking some pictures, or just rubbernecking at all the great scenery and just forgot to navigate, or I lost track of which island I was overflying. 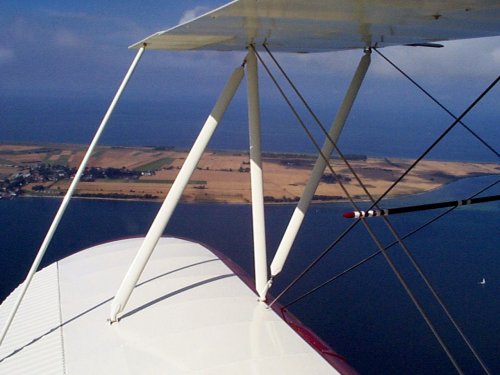 There was no harm done, I had plenty of fuel and there was almost zero traffic in the sky. In fact, we saw only one other plane in two hours of flying.

Today was a day for play. We cruised a lot of coastline today, getting down low on the water, buzzing deserted beaches and uninhabited islands, and then pulling up in sharp climbing turns before we got too close to signs of civilization. I just love the look and feel of my plane in a hard climbing turn. The angle of the wings against the horizon, the feel of the G-forces as I pull back on the stick, the way the surf and sand slip away below me, the rush of the air, the pull of the big round engine as I give it full throttle. Best of all I know what effect this has on people who see it from the ground. It is pure poetry in motion, a startling maneuver, yet gentle and sweet as a whisper in the breeze.

It was just this sort of maneuver which stole my breath away when I first saw it done by a biplane, over the beach, in front of my window, almost 15 years ago. And when my breath returned, and I realized that I had just experienced a moment of Destiny, I whispered a promise to myself: "Someday. Someday I will do that!"

I wonder if young Christian said something like that today.