A knock on my door woke me up early this morning. It was Mattias, looking grim. He had received news that his mother, who has been very sick for a couple of months, has taken a turn for the worse. He has decided he will fly his biplane home to Zurich today. I shower quickly and join him for a somber breakfast downstairs. There's just not much to say at a time like this. It's a call he's got to make on his own. I sure would like to keep flying along with him, but he plans to make the flight to Zurich in one day, and at the speeds we fly, and the headwinds, it would be more than 6 hours in the air, a real grind in an open-cockpit biplane. So it seems like we will be parting company here in Copenhagen, and I take a taxi back to the airport at Roskilde with him to see him off. I plan to hang out in Copenhagen for a day or so, then continue into Sweden.

In the taxi, his cell phone rings. It's Nici, his wife, who tells him not to try to get back right away, that being there by the weekend will be best. So the pressure to hammer out the miles is off, and we work out a plan to fly together for another couple of days.

We wanted to fly into Sweden, but there are no airport directory books available for Sweden, in English, available at the pilot shop here. We could make photo-copies of some airports, but it wouldn't be the right approach. Another bug in the plan is Customs. It is available only with 24 hour notice at the smaller airports, so it's not an option for today. The bigger airports are not interesting to us. So that leaves us nowhere. At least not in Sweden for today. Unless...

We have noticed that when we get to an airport without filing a flightplan they just ask us where we are from, we tell them where we came from, and that's all there is to it. We figure that if we didn't file the obligatory flight plan (needed for inter-country flights), and just landed at an airport that wasn't expecting us to be coming in from another country, then we could easily tell them that we were coming from another airport within the country. Foolproof! So we could fly out of Roskilde, tell them we are going for a local flight, or to another uncontrolled airport, and then fly over to Sweden, land at some little grass strip, like Hoganas for example, and simply tell them we are coming in from, say Eslov, or wherever. How could they possibly know the difference, and why would they even care? This is all starting to make very good sense, and the idea of being an international fugitive, and an illegal alien in a biplane... well it's kind of exciting!

We map out a local flight which will take us in a circular path, northeast from Roskilde along the west shore of the Isefjord, then northeast along the coast of the Nyrup Bugt (the local bay of the much larger Kattegat... you do have an atlas for all this, right?), all the way to the northernmost tip at Gilleleje, then southeast along the coast of the Oresund until we get to the Copenhagen airport Traffic Control Zone, then head back to Roskilde via the VFR corridor.

The essential element in our plan is that we do not miss our turn southeast at Gilleleje, because if we do, then we will continue across the water, just a few miles, to Sweden, and the beautiful little grass strip airport at Hoganas. And of course that would be illegal without filing a flight plan, and requesting Customs clearance 24 hours in advance. We couldn't do this no matter how bad we wanted to land in Sweden, and even though we would be heading south to Germany tomorrow, and not back this way for a long time, we just shouldn't, mustn't, fly over the line between Denmark and Sweden, which is just little more than a mile from this lovely little green grass strip of perfection sitting on a point of land jutting out into the sea. No, it would just be the wrong thing to do...

I gave Mattias my camera, so he could take a few photos of my favorite biplane in the air, just in case anything interesting happened.

We took off in formation, into a gusting 11 knot headwind and turned northwest to the shoreline, where we met up with some lower scattered-to-broken cumulus that looked just right to play with, so I radioed to Mattias to let's go upstairs where the air was smoother and the sights were better. Here's what it looked like: 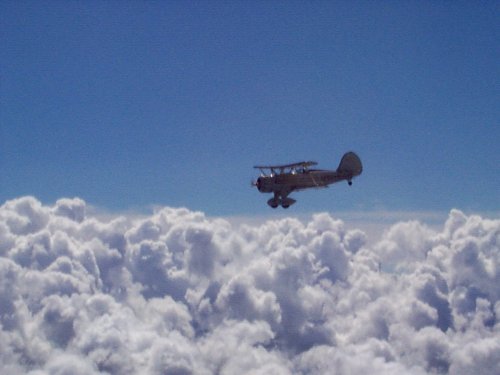 We played up on top for a while, keeping our bearings from time to time by looking at the shoreline between the broken clouds. When we had enough we dropped down through another hole and popped out over... well, I'll be darned, it was Sweden! We must have stayed up on top just a little too long! Gosh, this means that we are here illegally, and we better get out of here and back into Denmark airspace right away. But wait a minute, look down there, it's that perfect little grass strip at Hoganas! And there isn't a plane anywhere in sight. Why it's just begging for a couple of neat old biplanes to come and tickle the grass. It would be downright unfriendly to refuse. But it would also be illegal. Unless a guy had some engine trouble, then he could land there in an emergency. And if the engine trouble cleared up right away, then it would be ok to take off again! Some areas of aviation law leave gray areas and loopholes. Hmmm. Engine does seem to be running a bit rough...

Can you see the two intersecting grass runways in the photo above? Can you see the shadow of a Waco on one of them? It would be difficult to prove that it is my shadow.

It was a great flight!