My request for rain, as a cure for excessive yodeling and accordion noise, was promptly fulfilled last evening. Unfortuantely, it stuck around the entire evening, and most of today. I'm considering requesting just enough yodeling so we can take off and fly out of listening range.

I woke at 5:30am to the sounds of high winds and rain slapping against the skylight/window in my slant-roofed cell in the attic of this 4-star hotel on the North Sea. I wasn't so much concerned about the rain as I was the high winds because unfortunately we did not tie the planes down yesterday. We thought we would go for an evening fly around the island, but it took so long to find a room, we didn't have the energy left.

The winds continued to pick up, and when I was getting in the taxi to go to the airport, the wind slammed the door right out of my hands. We were dealing with winds of at least 35 knots, and we were wondering if we would find our planes where we left them, or if we would find them at all! But everything turned out just fine, they were still firmly planted on the grass parking area, looking as if nothing was the matter. We tied them down and retrieved a change of clothes for the day.

The rain stopped and the visibility was good enough to fly, but the winds continued at high levels and it would have been no fun at all to beat ourselves senseless in the air just to get someplace else. Especially since this was Sunday and some vacationers would be going home, freeing up some nice rooms and we could move out of our little half-rooms.

In search of the Internet, I was sent down to the hotel's conference room so I could send my emails through the hotel's only phone plug adaptable to a computer. Upon opening the door I was met with the lovliest sounds I have ever heard issue forth from a human being. And she was only warming up! Jessica Brinkmann was playing the piano in this large conference room, and practicing vocal scales with her back to the door, fully engrossed in her work, and never noticed my presence until my computer's speaker issued some very un-musical sounds to announce that I had email. She stopped, and turned and acknowledged her audience with a smile, and I was surprised to notice that she was as lovely as her voice. I apologised for my computer's bad manners, and complimented her virtuosity, and she came over to check out the computer, and after she had finished her practice for the day, I was stunned when she invited me to go for a walk on the beach.

Stunned, I say, because this wonderful child of only 20 years had pried out of me the fact that I am 2.7 times her age and yet would feel comfortable with that. And stunned also because the weather outside was definitely not what I would have chosen for a walk on the beach. It was a raging North Sea gale going on out there! But I'm a sucker for a pretty face, which I will share with you below. Here's Jessica, with her million-dollar throat swathed in several scarves: 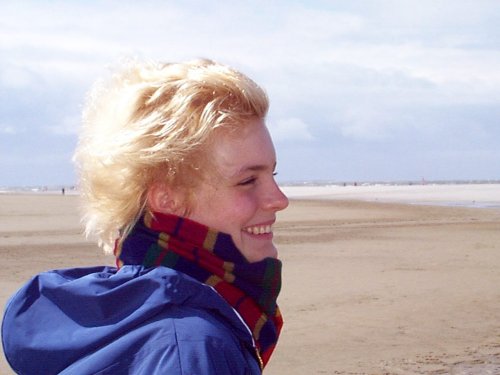 Jessica will be a famous opera singer someday, I can guarantee you, and you can say you heard about her here first. She has come to this remote island for two weeks vacation, alone, for the peace and quiet, and to practice. In real life she also studies Economics at university, works in food retailing, loves to ride horses, and speaks English quite well. She also took me for a walk on the beach that assured that the only thing on my mind would be sleep! A "walk" against a 35knot wind, in wet soggy sand that sucks your feet down, with fresh air forced down your lungs, sweating from the effort on the inside and chilled from the wet sea air on the outside, to me was more like the Bataan death march. And yet, strangely, it was fun. Young girls have a way of doing that!

Lunch after the walk was even more memorable, and considerably more civilized.

Some unfortunate news came our way today. Yesterday, at the air show in Oostende, Belgium, our stop of just a few days ago, a biplane didn't make it all the way through a low level loop and found it's way into a crowd of spectators, accelerating the ultimate adventure for 8 spectators plus the pilot.