The morning came prematurely, as all mornings-after do. My excesses of the night before were minor league compared to what most people in Amsterdam did, but for me a pint of Murphy's Irish Stout and a splash of Irish Whiskey is about all I can handle if I want to fly the next day. I was restored to functional status by a couple of cups of coffee, a shower and a look out the window. It was a brilliant blue sky, just perfect for flying. All we had to do was retrace our steps from yesterday, using just about every mode of transportation known to modern man, except ski lift and space shuttle, and we would be back to our biplanes on Texel.

On the ferry back to Texel island, I was fascinated with the gulls flying close to the ship, playing in the air currents and probably showing off and begging for scraps. I watched one of them for a long time, envying his consummate skill as an aviator, amazed at the incredible ways he would reconfigure his wings to suit the needs of the moment. It's easy to see how humans have looked at these birds for millions of years and longed to do the same thing. And it's only been for the last 90-some years that we have been able to do it. For me, only 4 years. Four of the most interesting and challenging and fulfilling years of my life. What a fantasy! 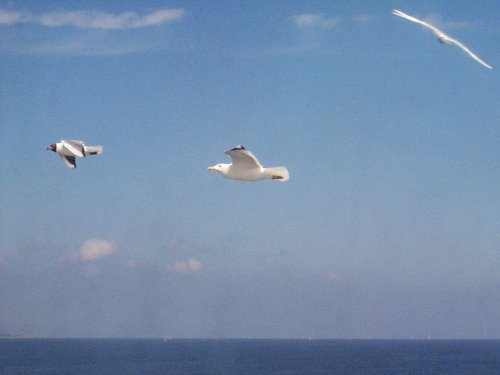 A light lunch at the restaurant, and a quick good-bye to the very friendly people (and a special thanks to the lovely and always smiling Janeke) at this really world-class grass strip, and we were airborne. At 1500 feet, looking down on Texel between some scattered mini cumulus, it was easy to see why this place is such a favorite of the Dutch. It's absolutely lovely from the air.

Today's flight was one of those I'll remember for a long time. It was too brief, only 1.1 hours, but it was silky smooth air and we were following a chain of islands strung out before us like colorful beads on a necklace floating in the dark blue/gray North Sea. Over each island gathered a short line of cumulus clouds at around 3000 feet, just perfect to go up and play among them.

Borkum Island is, like Texel, a favorite vacation spot for the people in the country. Like Texel, all rooms were booked. Only this time we didn't have the good fortune to have the friendly services of Ed ("I am everything") de Bruijn to help find us the only room left on the island. We had to do it the old-fashioned way. We took a taxi to every hotel on Borkum, and one by one, got out to beg for a room. We were turned away each time, until one beach front hotel finally had two rooms that they hardly ever rent, up in the attic of the hotel, with single beds under the very low sloping roof, the loo is across the hall from my room, the shower is down the hall. The ceiling slopes so low and so far into the room that only children's furniture can fit! I am hoping that I don't dream anything that would wake me up with a start because the ceiling is only a few inches away from my head when I'm sleeping. I suppose if I woke up quickly, I'd knock myself unconscious and never know it happened.

The beach here on Borkum is very wide, and filled with a thousand or more colorful little rental lounges, each of which is surrounded by a little wall of sand to mark off your private territory. 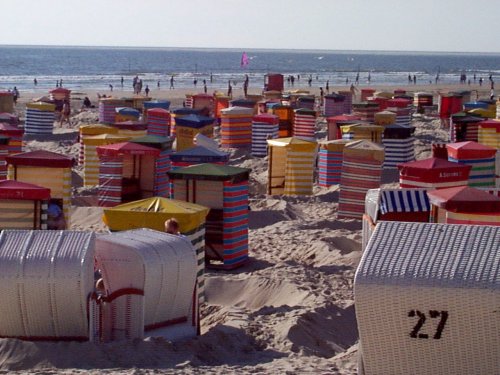 When we arrived at the beach at around 6pm, there was already a major party going on, and they looked like they had been at it for a good while before we got there. There were various vendors selling all kinds of German beers, as well as sangria, vodka, and tequila based drinks, and just about every kind of "wurst" you could ever imagine. The band that was playing then is still playing, five hours later, and they haven't taken a break yet! The only recognizable instrument in the band is the accordion, and every song sounds like the last one. These Germans are real party animals! 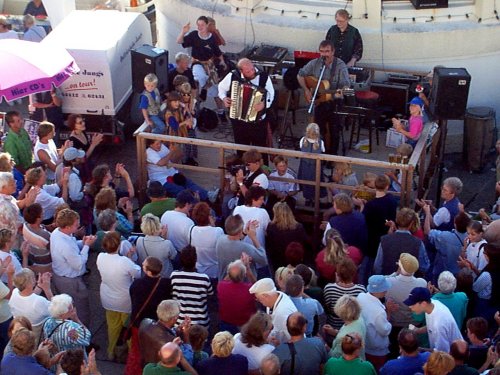 There is a lot of synchronized hand clapping while yelling "Hey, hey, hey, hey", singing along, beer swilling, and wurst munching. The men rub their enormous bellies and give lecherous red-faced smiles to the not quite so ingenuous frauleins who encourage even more boisterous behavior.

OK, guys, this isn't fun any more. I'm going to need some sleep here soon, or else I'm just going to have to get back out there again and show them how Irish people party. Yo! What's this? They just started yodeling! I'm going to do something I never thought I would do on this trip: I'm praying for rain!

The accordion is one of those instruments that needs a lot of alcohol to appreciate, otherwise it can drive you nuts. The beach front here in Borkum has several large sanatoriums mixed in with the hotels. I'm wondering if this endless accordion music hasn't inspired some miraculous cures of people who devised their own recovery just to get away from these mind numbing sounds. The ones who stay for more than a week are surely lobotomized without the need for all the messy surgery. One way or the other, there would be few complaints. I gotta get outta here!

If we can stay ahead of the weather front that's moving in from the west, we might be able to make it to Denmark and then Sweden, and who knows, maybe even the Arctic Circle and the land of the Midnight Sun. I wonder how many open-cockpit biplanes have flown north of the Arctic Circle. I have a friend in Umea, in the north of Sweden, and he says the weather is fine...