The morning began with a continuous light-to-medium rain shower. After breakfast it looked like it had quit for a while, so we went into town for some shopping and got completely soaked in a raging downpour on the way back, despite the umbrellas we just bought. It looked like a day that would never let us fly. And the airport manager agreed, saying that even if the weather would allow it, the runway conditions were just too soggy. Pause. However, he could guarantee that tomorrow would be better, saying that this was the worst weather for this time of year around here, ever.

This is the weekend, the hotels on this North Sea resort island are fully booked. If we are to be driven off the island, then the nearest large city is Amsterdam. We took a taxi to the rental car place and secured the last rental car on the island, an aging Peugeot station wagon with 147 thousand kilometers on the odometer. And no reverse gear. We drove this gem to the ferry and floated across the North Sea to the mainland, took a bus, then a train to the center of Amsterdam, then a taxi to the hotel on the "Dam", the very center square of all of Amsterdam.

Amsterdam is the seedy underbelly of all of Europe. Activities that are illegal elsewhere are openly solicited in Amsterdam. Of course there is the red light district, with shows public and private, shops, bars, and coffee houses where the sale and smoking of marijuana is legal. There is a certain section of the city set aside for the pursuit of these activities.

Where there is smoke, there is fire, so you can imagine what else is available without looking too hard. It didn't take me too long to find it: Guinness! And even better: Murphy's Irish Stout!

We stumbled on a place called Dirty Nelly's Irish Pub, just about a block to the right of The Grand Hotel Krasnapolsky, a 3-star (down from 4-star) shelter smack dab on the square (the "Dam"). Here I introduced Mattias to the smooth taste of Murphy's Stout, and he agreed it had some magical properties, capable of cooling one off, and warming one up, as well as letting things go and putting them into perspective. And this is just with one pint! And we moved on...

Further exploration led us to Rick's Cafe (the bar in the movie Casablanca with Humphrey Bogart). This is my second time at Rick's Cafe, the first visit was almost 10 years ago, and nothing much has changed. It is the core of Amsterdam. Here a cappuccino with a taste of Jamison's Irish Whiskey was the perfect protection from the cool North Sea breeze that freshened the early evening.

Here's a shot of Rick's Cafe, looking at it from sidewalk table, across the cobblestone walkway, by the side of canal. 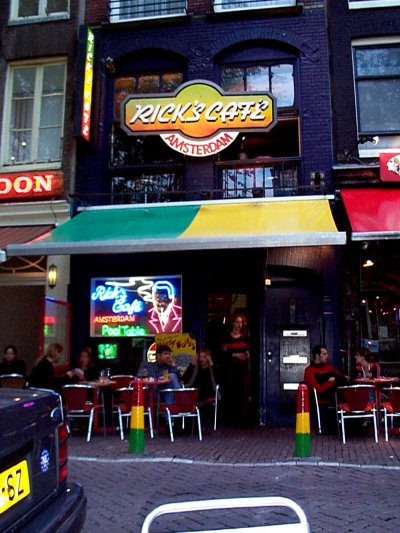 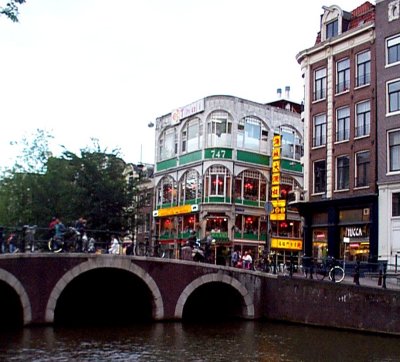 Tomorrow we'll walk to the taxi, then train, bus, ferry, rental car to the biplane and maybe go fly!

What an an incredible thing is happening!