Our request for a formation takeoff was denied by Luxembourg tower, it would probably have been too much excitement for them. So Mattias went first and I caught up to him easily. There was no wind at ground level, and the skies were sunny between the scattered cumulus clouds. It was a lovely day to fly.

There was considerable low fog over the Forest of the Ardennes, so we kept to the west at first and then headed straight north on our way to the sea. The clouds became lower, and thicker as we approached the coastline, and when we reached the North Sea, the clouds dissipated and there was nothing left except an absolutely clear sky.

The first order of business was to get into town for lunch. It was already 3pm and we hadn't eaten since breakfast at 9am. We took a taxi and were given a tour of the more interesting spots, including the previous king's vacation home on the beach, the racetrack where Michael Jackson will have a concert this summer, the casino, and various 4-star hotels. Oostende is a rather large resort town of 60,000 and with today's excellent weather, it seemed as if everyone was out enjoying it.

After lunch, I found my way to the beach and walked at the surprisingly warm water's edge for a while, collecting a few shells, then came upon a long jetty of smooth sun-warmed stones which proved irresistible for laying down and taking a nap. What a great treat it was to bask in the sun at last. It must be several weeks since I have seen a cloudless sky, and at least that long since I have been thoroughly warmed by the sun. Here's the first sunset over water I have seen in two months: 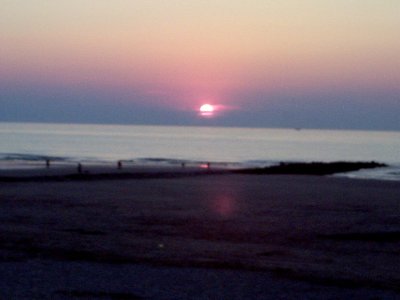 I have looked forward to this moment since the beginning of this tour. There is something extraordinarily refreshing and at the same time relaxing about the sea. The sound of the surf, the fresh air, the great variety of wildlife (including the people!) all provide stimulation, while the vast expanse of water and sky offer an indescribable peace.

And while the coastline is a great place to be while on the ground, it is even better in the air. Flying along the beaches is one of my favorite things to do, for many reasons. First and foremost, you can fly low. There are no restrictions about how low you can fly over water, as long as you stay away from persons, property, vehicles and vessels. Flying low heightens the sensation of speed and gives the pilot a much greater feeling of actually FLYING! There is just nothing which can compare to charging low over a deserted beach, banking wings in and out of an irregular coastline, diving and climbing with the rise and fall of the cliffs and rocks, dodging birds and boats and lighthouses.

Another reason I like flying the coast is that it requires virtually no navigation, which is work, therefore leaving only FUN. Navigation over the land is a constant chore to be sure you are avoiding restricted airspaces, staying away from towers, checking distances to the next checkpoint, staying on a compass heading, checking the effect of winds, and so on. When you are simply following the coastline there is virtually nothing left to do except watch out for traffic, and even that is substantially less work. Along the coast the traffic is almost always taking the same route as you are, but when you are over land, the traffic can come at you from any direction.

So here I am at the North Sea, the northern coast of continental Europe, with coastline extending east and west as far as I could ever want to fly. I am really looking forward to getting in the air tomorrow. And as usual, I have no idea which way we will go, or where we will wind up. The adventure continues...

Nici left our tour yesterday morning and went back to Geneva to pick up her son Hendrick. The previous three days of bad weather, the prospect of more of the same, and a growing case of homesickness (this was the first time she had been away from her son for more than a day since he was born) finally overcame her. Her great smile and fun loving disposition were wonderful gifts for the past several days. Thanks for coming along, Nici!

The only thing that wasn't boring about Luxembourg was my landing there, which I forgot to mention. Runway 24 was in use, and the wind was from 360 degrees, giving a quartering tailwind. In Europe, the custom is for the controller to radio the wind direction and speed only when you are established on final, and for my landing he called it at 6 knots, which is about all the quartering tailwind I want for my taildragger. If it was any more, I would have asked for the opposite runway, and maybe I should have requested it anyway. My landing was really quite good considering the circumstances. As I was touching down, the controller advised the plane landing behind me that the winds were 8 knots! I put the Waco down on the right main wheel, keeping the right wing low into the wind, with lots of left rudder to keep the plane straight. As soon as the tail settled on the runway, it popped back up again with a gust of wind from behind. It had all the ingredients for a ground loop, but it just didn't happen, this time. There's an old saying about pilots and ground loops: "There are those who have, and those who will." I haven't yet, and I'm sure not looking forward to it!