"On August 14, 1901, almost two and one half years before the Wright Brothers flew at Kitty Hawk, Gustave Whitehead ... lifted his acetylene-powered monoplane into the air at Fairfield, Connecticut, for his first flight."

So reads one of the documents in the Gustave Whitehead (Weisskopf) museum in Leutershausen. But every pilot, every schoolboy, knows that the Wright Brothers were the first to fly, so what is going on here in this little town in Bavaria?

Fascinated with flight as a young man, he tinkered with many different aspects of flight, including balloons, kites, and parachutes. He watched birds in flight, built and patented a hang glider, built engines, experimented with fuels, and was an inventor of an incredible variety of innovations which ultimately led to the first powered flight by man.

The machine which took him into the air for the first time, his No. 21, included advanced features such as a powered landing gear, folding wings and adjustable pitch propellers. He was also the first to land a plane on water. His early flights are documented in several respected publications. So with all of this fact supporting his rightful place as the Father of Aviation, how can it be that he is virtually unknown?

You may be as incredulous about all of this as I was, but if you had the opportunity to visit this little museum, and take the time to consider the evidence, you might very well come away questioning the history lessons you learned as a child.

I would never have come to Leutershausen, a small walled city of 3000 people, built in the 14th century, in the middle of nowhere in Bavaria, if it were not for the urging of a fellow named Bill O'Dwyer. I have never met Bill, except that we have swapped numerous emails over the last month or so. He was turned on to my tour by a mutual friend/pilot/writer (was it Budd Davisson?). Bill O'Dwyer is a retired Air Force Major, lives in Fairfield CT (site of the first flight) and was highly instrumental in the founding of this museum after discovering and researching evidence of this historical event. I consider it to be one of the highlights of my tour to have met Bill on the Internet, and to have found my way to the birthplace of the true First Flyer.

Here's a photograph of the monument erected just outside the ancient walls of Leutershausen, honoring their most famous citizen. What you see here is a replica of Weisskopf's flying machine No. 21, perched atop the monument. 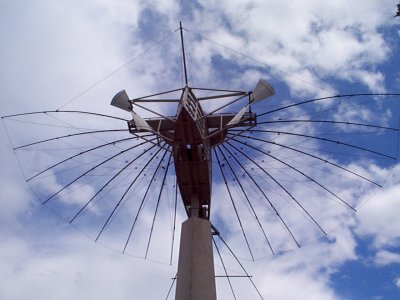 And a photo of the two men who took the time to show us around the museum and explain all of the fascinating details, on the left Matthias Lechner, Vice Chairman, and on the right Hermann Betscher, Chairman of the Historical Flight Research Committee, pictured here at the base of the monument. 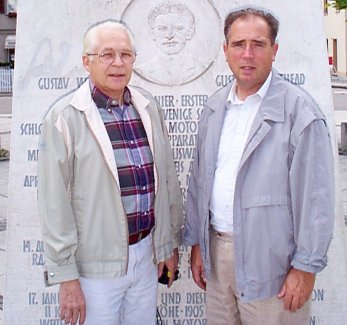 Here's the museum itself, housed in a relatively modern building for Leutershausen, built in 1624!! 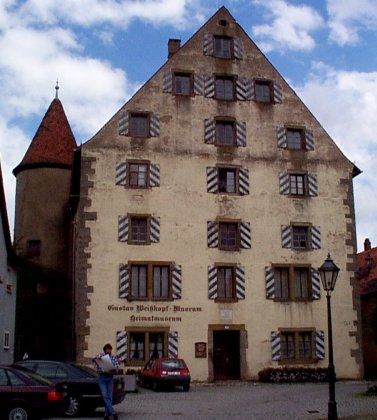 There's a lot more to this great story than I have been able to mention in this brief email, but maybe you will take the time to find out more by reading the Bill O'Dwyer book History by Contract.

The weather pattern of the last few days seems to be breaking up and we are still trying to get to the north coast of Europe, so we had to head back to our planes hangared in Donaueschlingen. And it was finally my turn to drive the Autobahn in our big, bad Mercedes Benz! Maybe it's just a "guy thing", but I have always liked to drive fast, and part of the price you pay for driving fast is the risk of getting caught by the police. This is true just about everywhere in the world except on the Autobahns of Germany where there is no speed limit whatsoever.

What a fantasy: to be able to drive a very good car, built for high speed touring, flat out along excellent roads, blasting past every car on the road, without ever once looking in the rear view mirror for police, without ever once worrying about a radar trap. The last time I was able to come close to this was when I was doing some SCCA sports car racing on the racetracks on the east coast of the US, in the mid-Sixties. Driving today on the Autobahn was like being a kid again, like coming home.

There was never a time when I felt unsafe. The big Mercedes was built like a tank and highly stable on the road. The people who drive these roads are used to very high speed drivers coming up behind them, and they melt out of your way as you approach them. Very courteous and respectful. I was able to sustain speeds at well over 100mph, and occasionally exceeding 120mph for some stretches, for about one and a half hours before being slowed down in the traffic around Stuttgart, where I turned the wheel over to Mattias and dozed in the right seat. What an great ride!

What a great day!