Last night we took in the movie "Con Air", tantalized by the theater's outdoor posters featuring flying machines and big explosions. It looked like it was in English, but it was in German, so I had an interesting 90 minutes of trying to decipher the plot without understanding a word. I wouldn't recommend the movie for any reason, and neither would my friends Nici and Mattias who understood the German perfectly.

The only change in the weather for today is that it got worse. There was no break at all in the low clouds, and it rained continuously. A perfect day for visiting the museums. The Porsche factory and museum are here, and they give tours, but not on Saturday. But the Mercedes Benz museum is also in Stuttgart, and they are more accommodating, so we spend a most delightful afternoon tracing the history of automobiles from the very first Daimler all the way to the modern retractable hardtop SLK sports car. They had cars of Emperors and Popes and movie stars and world champion race cars as well as the ordinary touring sedans, limos and sports cars through the past 100 years. It was very well done, as you would expect from Mercedes.

My favorite Mercedes of all time is the 1036 Type 500 K Special Roadster, which achieved 160 kmh on a supercharged engine of 160 hp. To me it a fabulous example of the extraordinary automotive designs produced in the mid-'30s. 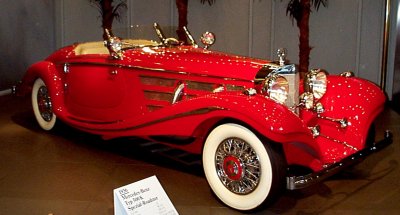 It is very reminiscent of the US-made Auburn boat-tailed speedster of the same era. Both of these cars drove the rich and famous in luxury touring at the same time as my Waco first took to the air.

The favorite of Mattias and Nici was the 1954 Mercedes Benz 300 SL Coupe with those famous "gull-wing" doors. I finally got them to pose for a picture: 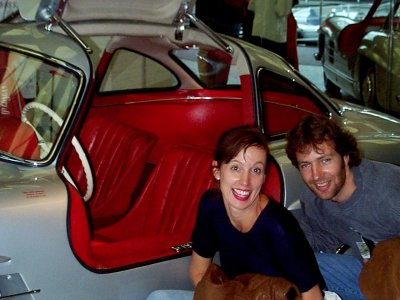 Just to show that the museum isn't limited to automobiles, here's a shot of the 1987 Mercedes C-9 race car (720hp and 402 kmh!) with a Mercedes engined monoplane called the Komrade. 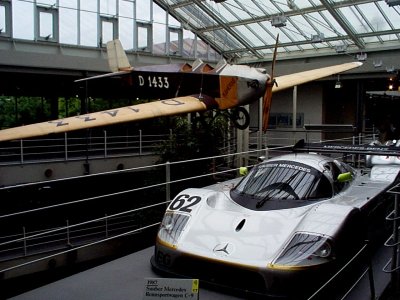 Mercedes race cars used to be all painted white, until one year the newly designed car showed up for the first race of the season weighing exactly one pound over the limit. The night before the race the car was completely sanded down to bare (silver) metal to get rid of the extra pound. It went on to win the race, and henceforth all Mercedes race cars had been silver.

The gift shop at the museum was too much to resist. I bought a model 300 SL Coupe model for Mattias and a Mercedes pen set for Nici, in appreciation for their hospitality during my stay at their home in Zurich. And I got a model of the 500K, in red, for my toy car collection.

On the way back to the hotel we got the opportunity to try out the GPS system in our rental Mercedes. Simply enter your desired destination in the dashboard mounted computer and a voice guides you every step of the way with directions such as: "Bear to the right 200 meters ahead" or "Turn left 500 meters". It even knew, and advised us, about a very subtle right jog in the road, preventing us from following the train tracks into a train-only tunnel. It is incredibly accurate, knows every road, hotel, restaurant, airport, gas station and place of interest in Germany, but unfortunately for me, speaks only German. I'm wondering when the day will arrive when it will be smart enough to know that the car ahead of you is planning on making a right turn in 500 meters, but he is in the left lane, so be careful. Or when it could recognize that you spent the night at the hotel InterContinental on Willy Brandt Strasse and would you like directions to, and reservations at (using the cell phone), the InterContinental in Cannes, the next destination in your itinerary. It could easily bring to your attention various places of interest before you get to them, and give you more information about them if you wanted with the touch of a button, could recognize that you haven't stopped for lunch yet, and suggest a place to stop which offers your favorite cuisine, and even... well, you get the idea. I have the feeling that the future is coming at us so fast that by the time we get around to dealing with each new wonderful advance, it is already obsolete and replaced with something even more miraculous.

Throughout Germany it is raining, and has been for so long that they are calling it "The Flood of the Century". Above the thick cloud layer the sun is shining. Someday soon the clouds will move away to the east, the sun will again shine on the grass runways and my beautiful Waco biplane will again take to the air, flying north to the Baltic Sea.