We checked out of our hotel, the Beau Rivage in Geneva, early in the morning to get a good start on the weather that was moving in from the west. But no matter how fast you try to move in aviation, it seems like there is always something else to be done that slows you down.

This time it was an endless phone call from Mattias' credit card company who wanted to be sure that it was really him who was spending all that money on his plastic. He seldom uses his credit card and all of this recent activity tripped their computer program.

Speaking of spending money, the cost for a liter of aviation fuel in Switzerland is 1.77 Swiss francs, or about $8 a gallon. It's about half that if you are a Swiss citizen, and you are flying only within the country.

The goal today was to reach Ansbach-Petersdorf airport in Germany to meet Hermann Betschler, a fellow who is the good friend of someone I have never met, but with whom I have traded quite a few emails during this trip (Bill O'Dwyer). It's a long story, and I'll try to clarify it later. Anyway, this fellow Hermann Betschler and Bill O'Dwyer have started quite an museum of interest to pilots, and I've been invited to stop by for a tour "when I'm in the area". And since we'll be passing right by on our way to the sea... what the heck!

The takeoff from the grass runway at Geneva Internation was really a lot of fun. Mattias was taking his bride Nici and some of her luggage so he was heavily loaded and only added enough fuel to make it to our first stop at Donaueschingen Germany. This jaw-breaker named town is about halfway to Ansbach-Petersdorf and is also where Mattias keeps his biplane when he's not touring around Europe. It is also where the beautiful blue Danube River is formed by the confluence of the Brigach and the Breg rivers. People around here spell Danube as "Donau", hence the name of the town. So much for the geography lessons. Whew!

Now back to the takeoff from the grass at Geneva. Heavily loaded Mattias goes first and is finally off the ground so far down the runway I figured he'd never get off. The culprit was not so much the weight of his plane, but the tailwind which picked up just as we taxied into position. It was only about 4 or 5 knots, but enough to make it an interesting!

My turn wasn't so bad because I wasn't as heavily loaded, even though I was serving as the mule, carrying an extra bag or two from their plane, and I did top off the tanks. I was more concerned about the tailwind, which can be no fun at all for tail draggers like the Waco. I stood on the brakes, gave it full throttle, released the brakes and started down the grass, everything is going fine. A little, just a very little, forward stick to lighten the tail wheel, gaining speed all the time, and pretty soon the Waco is getting around to the idea that it's time to fly. Right about this time, the runway falls away into a dip, the plane tries to fly, but it's not ready yet, falls back down, hits a bump, launches itself a foot or two in the air, and still not ready to fly, lets down again just in time to hit the other end of the dip and launches itself again, this time just barely hanging on to the air and sure enough, we are flying! It reminded me of the great film clip you have probably seen of Lindbergh's takeoff on the grass, heavily loaded with fuel, for his trans-Atlantic solo flight.

Only on my takeoff, I had one other factor to contend with. Here I am, climbing out at about 50 feet off the grass when something catches my eye, off to the left, and I turn to see one of those monster steel tubes carrying several hundred people taking off right beside me on the main concrete runway. Now this big guy is way faster than me and within seconds he is up, up and away while I'm still working on getting to 100 feet altitude.

Then something I read in the Jeppesen airport data sheet for Geneva comes flashing back to mind: "Wake turbulence from traffic on parallel runway has to be expected." And this is the exact situation they had in mind. Wake turbulence from these heavy commercial aircraft is the kind of stuff that can trash a slow little toy like my biplane. You can't see it, but it's very real. It can flip a plane like mine over on its back, and at this low altitude there would be no possibility of recovery.

All these thoughts are bouncing around in my mind while I'm hanging on for dear life, waiting for the inevitable. I figure that the only thing I can do to avoid it is to head right and away from the source of the turbulence, but Mattias is climbing out to the right ahead of me and if I go too far to the right I'll cut him off in the pattern. But there is no real choice here, I'm fighting an unseen enemy, and this is not a time to be playing by the rules. I want out of here, NOW!

Of course, you already know that the wake turbulence monster did not get me today. And I was never any real concern to Mattias because I turned way inside of his turn. I never felt even a ripple from that big plane. I was lucky.

The rest of the flight was a breeze. The conditions were very hazy with a high overcast, so the air was very still and the flying was silky smooth. We flew over several lakes, along the foothills of some mountains, we hit some light rain for a few minutes, and then out again into the clear for an easy straight-in approach to Donaueschingen. (It's pronounced the way it looks!)

I gave my camera to Nici for this flight and she took a shot of her favorite Waco pilot (Mattias), looking back at him from her separate cockpit up front.

And here's another one Nici took of my favorite Waco, flying in the haze over Lake Geneva: 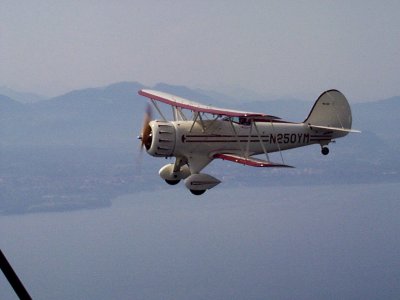 There's a really good restaurant and hotel at this airport. We had an excellent lunch, but we all ate way too much, and even the cappuccino I had didn't do much to get me awake again. The weather report for the next leg into Ansbach-Petersdorf (a lot easier to pronounce) was calling for thunderstorms in the late afternoon, and that just made it easier for us to take refuge in the hotel for the night.

We refueled the planes and discovered that they don't take credit cards for fuel here, and we didn't have any Marks! Right, we are in Germany now, so we need a whole different kind of money. It will be a good thing when they get the Euro currency in circulation, but many people think it will never happen. The only way to get money for gas is to go take a taxi into town and raid an ATM machine. In the meantime, to cover some other expenses, I convert some other small denomination folding money that has building up in my pockets, remnants of my earlier travels to Sardinia (lire), France (Fr. francs), Switzerland (Sw. francs), into a few marks. What a mess!

Before the ATM raid, we decide to put the planes in the hangar and out of the rain that is just now spitting the first few drops, warning of a lot more to come soon. Mattias keeps his biplane hangared here, and there is room for his and mine in a large communal hangar at the end of the taxiway. This hangar has a most unusual feature, a turntable! You push your plane onto the turntable, push a button to rotate your plane into an empty slot on the perimeter of the table, then push it off. This is such a cool thing I want one for my own hangar, except that I want one that will fit just the Waco, and I want it to turn around all day long so I can see my lovely biplane from all different angles all the time! The only problem is that I'd have to dig up the floor of the Fun House in order to get it installed. Well, maybe in the next Fun House. But it sure was fun to play with this turntable!

After we got back from town with the money, and paid for the fuel, we decided to clean the planes. Actually Mattias decided to clean his plane, and I just could not bear to see his plane cleaner than mine, which was getting REALLY grungy with all the bugs from the grass runway playing. I usually delegate this kind of work, but today there were no delegatees around, so I knuckled down and did the job myself. And now I have one superfine looking ride, yes sir! I am also one super tired dude. So by the time you read this, I'll be dreaming of flying the Baltic Sea coastline.