This is officially Nici's first day of vacation, so she drove her toddler son Hendrick to her sister's home in Geneva, about 3 hours by car from Zurich. Her sister Ulricka will take care of Hendrick for the next week or so that Nici will be flying along with Mattias and me.

Our plan for today was to fly our biplanes to Geneva International airport and pick up Nici and then fly somewhere over into Germany. It almost went that way.

Geneva International is a major league airport, possibly the largest airport I have flown into so far this tour. It requires a pre-filed flight plan, a lot of radio communications, and navigating to published checkpoints. It is all very regimented. Everything must be done exactly just so. I hate this kind of flying.

My plan was to let Mattias handle all the radio and navigation and I would just stick like glue to his wing until he turned base, then I would throttle back and land close behind him. I had all the charts and radio frequencies just in case we got separated and I had to deal with the controllers myself, but I truly dreaded that possibility.

The hour and a half flight went flawlessly. Mattias handled the radio and navigation beautifully through the Bern control zone as well as Geneva. The air was relatively calm, and the temperature was so warm that we both flew with only light shirts. The view was, again, spectacular. There are some Alps we didn't yet get the chance to explore south of Lake Geneva, and the air was clear enough to see them all lined up for our inspection. Above them all stood Mount Blanc, the highest peak in all Europe.

Geneva International airport has got to be the most enlightened major city airport I have yet visited. They have a grass strip just for General Aviation aircraft!! And it is so very well taken care of, it may well be the best grass strip so far.

The grass strip is very close to, and parallels the long main runway. This sets up the possibility of wake turbulence from the big jets spilling over onto the grass strip and I was quite concerned about getting flipped over on my back at low altitude by some "heavy" coming in before me. Actually, there was nothing to worry about because there were no big iron landing while we were in the pattern.

My landing was good, from the standpoint that the plane suffered no major structural damage and will probably be flyable again tomorrow. Other than that, it was not one of my best landings. The wind was only about 5 knots, down the runway, so it should have been a really nice landing. Unfortunately, there is a dip in the runway right past the approach end numbers. I thought I had this landing really nailed and put the Waco down smartly in three point position right beyond the numbers... right at the dip. That left me in full stall for a perfect landing, if the runway had been up at the level it should have been. Instead the Waco fell out of the air, dropping about two feet into some very forgiving grass which saved the day. If I ever again land at Geneva International, I'll know just what to do.

It was almost 4pm when we landed and we hadn't had lunch yet, so we decided to stay in Geneva for the night and make the flight to Germany in the morning. Our taxi driver directed us to a very nice hotel right on the lakefront, at the extreme southeast shore. Here's the view from the window of the room. 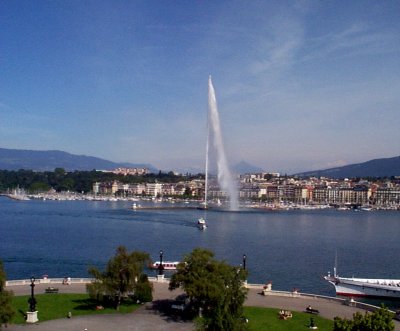 The little bit I've seen of Geneva I enjoyed. Lots of sidewalk cafes, very clean, lots of shops and historical buildings. We had a fine meal this evening at a sidewalk cafe in the oldest section of town, made even better because of the great weather. The temperature stayed in the 70's all evening. We walked back to the hotel for desert and cappuccino and talked of our fantasy vacation plans.

Where would we go? Nici wanted to see some coastlines, and we all agreed that was the best plan of all. The Alps are magnificent, and I have thoroughly enjoyed my time among them, but I'm getting a little burned out on big lumps of rock, dirt and snow. I need some oceans! We decided we would fly north through Germany until we reach the north coast of Europe, then fly west along the coast through Denmark, Netherlands, Belgium, and then France. And skip across the English Channel to England, Scotland, then Ireland. LOTS of coastline.

All of the foregoing is, as you know so well by now, completely dependent on the weather!