The weather is quite good, other than the haze which hangs over the Zurich area. The mountain passes are all open, for now anyway. So where to go? The only direction we haven't gone yet is southeast. And the primo destination in that direction is St. Moritz. You may have heard of it, the playground of the rich and famous skiers. It is buried deep in the Alps, and the airport is at the highest elevation in all of Europe, for jets, 5600 feet. This means that the air will be much less dense than at sea level, and therefore ground speed will be much faster on landing, and controllability will be an issue on takeoff and landing, and the plane will not climb anywhere near as fast as at lower elevations. We will have to climb to 8,500 feet to get over the highest pass into St. Moritz.

Nothing necessarily difficult in any of this. It's just that these are some of the more unusual circumstances surrounding this particular flight.

The first part of the flight goes without incident. We take off from Birrfeld Regional Flugplatz (airport) using runway 26 and turn right to 292 degrees to avoid making too much noise over the houses near the airport. From there we head out over Lake Zurich and fly the length of the lake southeast to the entry into the Alps.

The clouds are hugging the peaks of the highest mountains on both sides of the valley, and as we go deeper into the Alps, the cloud bases fall lower down the sides of these incredible granite walls. We fly on, and the clouds are now hanging in the air at several different altitudes, hanging low over Alpine pastures, and falling down into the valley below, looking for all the world like some gray Spanish moss dripping from unseen branches. 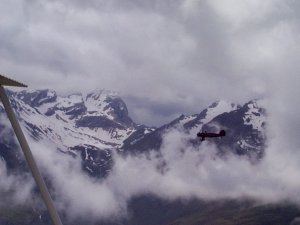 We were at about 7500 feet and cruising close together when my TCAD (Traffic Collision Avoidance/Detection) sounds an alarm that there is traffic in the vicinity. It rang 3 pings in rapid succession, the signal that the traffic is very close. I immediately called to Mattias that we had a bogey in the area, but as the words are coming out of my mouth a red-tailed Swiss military fighter jet slips past Mattias' right wing with less than 200 feet to spare. I'm sure that jet jockey never expected to see to a couple of rickety old biplanes up here, if he even saw us at all. Military jets seldom travel alone, so when I saw another one coming straight at me, I snapped this photo as he blasted right over my head, probably less than 10 feet! 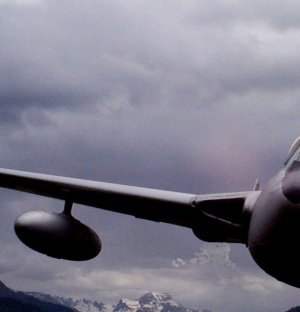 (Actually it didn't happen exactly like that. In fact, it didn't happen at all, not the second jet anyway. I can't tell a lie. Pretty good joke, right? I figured you would be ready for a good gag photo right about now. This photo is a doctored picture (using Paint Shop Pro) of a Vampire that sits on the ground, welded to a pole, at the St. Moritz airport. The first jet that nearly hit Mattias was real, an F-5 Tiger, current inventory in the Swiss Air Force.)

Climbing slowly up to 8,500 feet, in stair step fashion to keep above the rising terrain, we pick our way through valleys and passes until we are met at one turn with clouds that seem to go down to the ground. It looks to me as if we have met with an impasse, but Mattias keeps on flying. He is on the right side of the pass, and I am on the left. From his vantage point he can see around the cloud in front of me and sees that the pass into the St. Moritz valley is clear.

This last mountain pass is the narrowest one I have yet flown. There seems to be no way a plane could turn around in here. Once you have committed to enter this pass, you better be right that the other end, which you can not see from the entry, is clear! We press on, and after the final turn in the pass, we are greeted with rain. At first it is light, and nothing to be concerned about. Mattias if flying ahead of me. We can see St. Moritz to the left, but he decides to turn right to show me a spectacular lake and then he turns back again toward St. Moritz.

I wasn't directly behind him going over the lake, I was more to the left, in the center of the valley, and I went deeper into the valley, and I was completely surprised when the rain became much heavier. The water was curling around my windshield in sheets and dripping all over me and my charts. The weather was moving in very rapidly so I executed a quick 180 and got out of there immediately.

At this altitude, the temperature was in the 40's, there was lots of moisture in the air, and we were descending 2000 feet to pattern altitude for St. Moritz, so I added some carburetor heat to avoid icing. I kept warm with my lucky scarf.

The approach into St. Moritz is a lot like the one into Ascona. I had to fly downwind very close to a mountain on my right, keeping the runway on my left, at 6,600 feet. Field elevation is 5,600 feet. The trick is to keep as far to the right as possible, but stay out of the trees, which are only a hundred feet under the wheels. Further downwind there are some power lines which need to be crossed over, then a left base turn in the widest part of the valley. There is so little room to maneuver that the turn to final has to be made way beyond the runway centerline, then make a right base/final approach to land. Very, very interesting!

We had a nice hot lunch to warm up from the flight, but we ate indoors because the rain was now passing over the airport. From the restaurant we could see both ends of the valley, and it didn't look good for getting out of there today, but with a lot of optimism, we refueled in the rain and left the planes covered while we hedged our bets by making arrangements for hangar space for the evening. Then we went back to the restaurant to wait and see what the weather would decide to do next.

No sooner had we sat down than the valley entrance to the west had cleared, so we decided to go for it. The only remaining challenge was that the winds dictated that we take off to the east, and in that direction it was still raining, and it would also require that we make a 180 degree turn in a very tight valley in order to get out of there.

Take a deep breath, strap on your harness, and give it a shot.

People are milling all about, taking pictures of our planes and asking questions and pointing. They are quite used to seeing the private jets of the rich skiers who come here, but I'm sure they haven't seen the likes of these biplanes in here before! I was sitting in the cockpit of my plane, with my head down doing pilot stuff when I was startled by a flash and looked up to see a man only a few feet from my face taking a picture. Hey, guy, are you thinking that you wanted to get a shot of the fool who flew his biplane in here in the rain, and is now going to fly it out of here in the rain. Did you want a photo of the nut who thought he could turn around in this valley with this little plane?

Mattias and I take off side by side down the wide jet runway, heading into the gathering gray mass at the end of the runway. I'm on the right, closest to the mountain. As I clear the departure end of the runway and fly more to the right, closer to the mountain, I look down to see the power lines pass beneath my wheels, by a lot less of a margin than I would have liked.

I've got full throttle, of course, but at this altitude my engine is gasping for air. The wings are scratching and clawing in the thin air, desperately trying to get a better hold. I'm doing everything I can to help, keeping airspeed at the critical 76 mph, right rudder, ball centered, but it isn't easy because the plane is getting buffeted around with the rainstorm. The reduced visibility and the rain are not making this any fun. Mattias is on my left, and I need to make a left turn. I don't want to turn into him, so I call him on the radio and coordinate our turns.

That was one of the toughest turns I have ever made. Getting bounced around with the weather, the rain, the high density altitude, the narrow valley, it all added up to a real nail biting situation... if I had the time for it. The other side of the valley is fast approaching and I've still got to climb and turn, but when you are turning, you lose lift, and with this density altitude, there is not much lift to begin with. And with the turbulence, it's just not possible to keep a climb going. Get UP, dammit! No, better than UP, what I really want now is to TURN. That mountain is getting too close for comfort. If I turn too tight, I will lose altitude, and if I lose altitude I will not clear the terrain.

These are the times when I get to thinking that maybe I should have taken up checkers for a hobby.

You already know how it turned out, of course. I did make the turn, I did clear the terrain, and so did Mattias. We probably had a lot more clearance than we needed. Maybe I worry too much. I like to fly when conditions are PERFECT. Anything less and my imagination goes to work.

The rest of the flight back to Birrfeld Flugplatz was relatively uneventful, except for the final approach to landing. Mattias was ahead and on right downwind for runway 26, and I could see a motor glider, low and slow close below him and I radioed a warning and he went around. So did I. This airport is really busy! How busy? The people here say that it is in fact the busiest airport in all of Europe without a controller. I believe it!

Total flight time for today was only 3 hours, but it felt like 30! I was really glad to be down again. On the way home, right in front of Mattias' driveway, a black cat ran across our path. Too late, cat, I'm already home!