It is now late at night, and outside severe thunderstorms rage all through the Alps. I can barely imagine the kind of fury going on in those granite mountain passes right now. I am thinking again how lucky I was to be able to fly through there in smooth air.

The lightning flashes have cut off the my phone connection several times before I get the idea that maybe I should disconnect the computer from the phone and the electric outlet before my equipment (and me!) get fried beyond all recognition. I guess I stayed on-line so long because it has been more than 3 days since I have been able to connect. Today I finally got the problem resolved.

As it turned out, I had the wrong adapter to connect a USA modem cord to a Swiss phone plug. The adapter I bought in Ascona (Switzerland) worked, but only because the phone in Ascona was wired wrong! One of those rare, but interesting, cases where two wrongs make a right. Of course the wrong adapter didn't work in Zurich, at Mattias' home, and that's why I thought my modem was FUBAR.

This morning I took my notebook computer (Toshiba 660CDT) to the Toshiba authorized repair center in Zurich, and got the problem resolved. The genius who figured it all out was Urs Glattli, and he did it in less than 10 minutes, gave me the proper adapter, and did it all for free! What a class act! So if you are ever stuck in Zurich with a computer problem, now you know who to call.

Today was not a flying day. The weather was forecast to be yucky, and it delivered as promised. There was a break in the mess during dinner and the skies cleared up over the Alps, revealing a most awesome skyline. I would have taken a picture, if I had my camera with me, but then you have probably already burned out on seeing Alp photos by now.

In addition to the weather problems, it seems that Nici has got some kind of bug, so it has been one of those bummer days all around. Mattias will take her to the doctor tomorrow morning. Nici has been an absolute angel during my visit. Last night Nici and Mattias teamed up to make one of the finest meals I have had on this trip. What made it so special, I think, was that it was the first real home-cooked meal in 45 days on the road. What a treat!

We have set out a plan to fly again on Wednesday to Geneva, where Mattias will pick up Nici (who will drive there with little Hendrick to turn him over to a sitter for a week or so) and then we will all fly to Germany the same day. From there we will tour north through Germany, then along the north coast of Europe into Netherlands, Belgium, Denmark, Sweden and whatever else there is up around there. This is the country that Nici wants to see most, and she will only be able to fly with us for a week or so, then has to come back to Zurich to keep the dental practice running until Mattias returns around August 11. After Nici returns, Mattias and I will try to tour England, Scotland, and Ireland.

All of the foregoing is completely dependent on the weather, of course.

Here's a photo of Nici and Mattias' son, little Hendrick, 17 months old and a bundle of energy. He has about 3 words in his vocabulary right now, so he and I can speak the same amount of German. However, I think he understands more than I do. 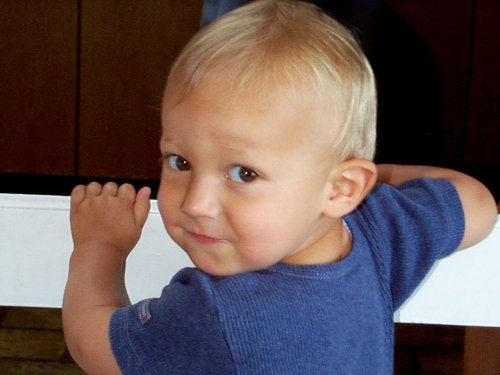 What really impresses me is that their dog Cora understands a LOT more German than I do, but has only slightly more trouble with speaking it.