The weather was forecast to be excellent today, and rainy for the next several days. With such perfect weather for flying, and a weekend, everyone was in the air today. The airport at Birrfeld is extremely busy with gliders and tow planes as well as the normal general aviation powered aircraft and today was no exception.

Mattias and I took off in sequence and headed south, into the Alps. The air was warm and still, and there were broken cumulus at around 8,000 to 10,000 feet. It was a wonderful day to fly. The views were absolutely shocking. Each mountain pass brought some new impossible to believe vista of granite and snow and valleys below. Mattias and I were very quiet on the radio for a long time. It was if we were in church. We would fly very close to rock formations at 7,000 feet, green with grass and trees and a solitary farmhouse. And watch the ground fall away dramatically, straight down to the valley floor. How can people actually live here? It's so scary, for me, to think of walking around at such heights, and yet here I am flying through it all. Strange.

At one point, Mattias called my attention to a hotel on the side of a 12,000 foot mountain peak. We were at about 8,000 feet at the time, so I looked down and saw a building that looked a lot like a hotel, at about 7500 feet, and was suitably amazed. I didn't find out until later that I should have been looking up, much higher, at the 11,000 foot level! 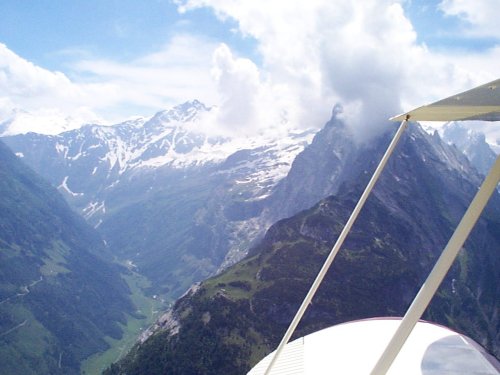 It was right about this point that Mattias and I flew under a dark gray cumulus cloud. I was following him by about half a mile. He was flying directly toward the side of the mountain. It was a granite face that started at ground level and extended straight up into the cloud. 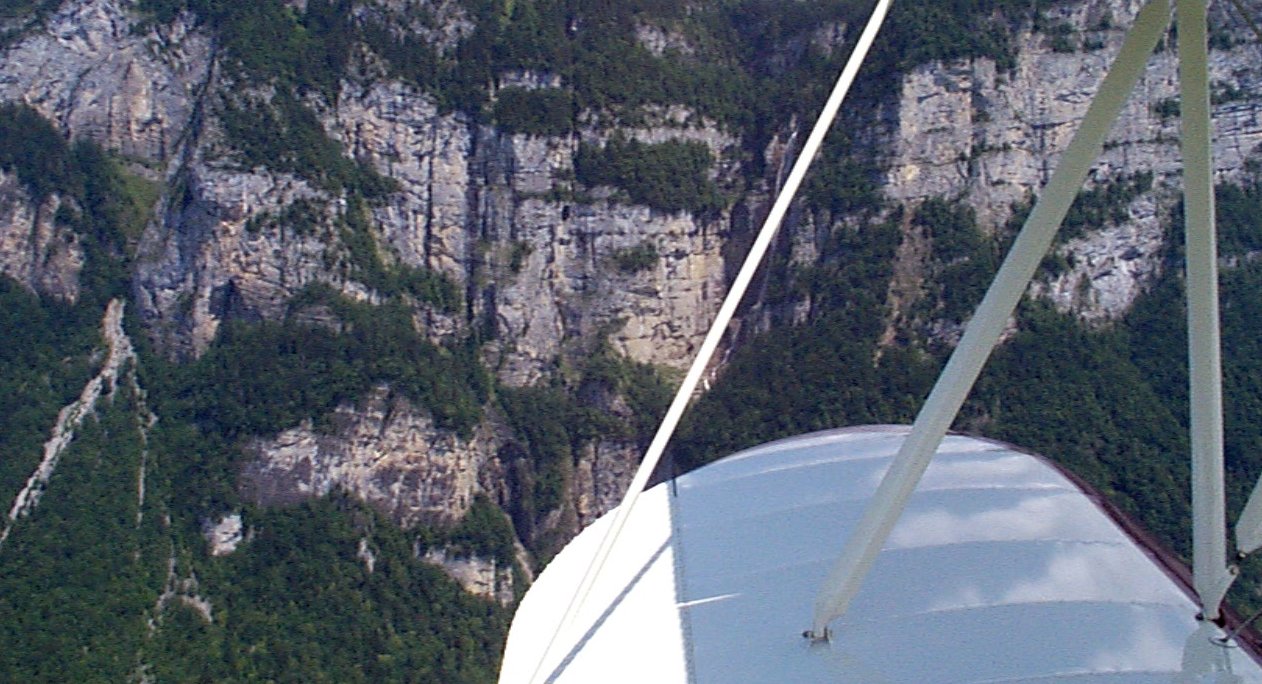 The dark gray/blue cloud and the dark gray/blue granite face of the mountain blended together as I watched Mattias' dark blue biplane fly directly into the face of the mountain, and he disappeared. The mountain/cloud just gobbled him up. No more flashing strobe lights, no navigation lights. No more easily identifiable biplane wings. He was gone. I waited for the explosion, but there was none. He was just gone. I looked around for several minutes, and found nothing.

"Mattias. I have lost you. Say your position." I radioed, without hope.

"Mattias. Where are you. I have lost you. Say your position." Again I radio. And again there was silence.

I look for pieces of Waco tumbling down the face of the cliff, but the mountain is still. How can this happen?

I keep searching. "Hello Mattias. Mattias do you read me?" Nothing. I wait a long time, planning my next move. I have plenty of gas. I have a GPS, so I can't get lost. I can find my way out of this mountain pass easily enough, just retrace my path.

The way to get better radio reception in the mountains is to climb, so I add another thousand feet and try again: "Mattias. Do you read?"

"Yes Michael, where are you?" Thank God! But how did he escape the mountain? And if he did, where did he go? He is asking me where I am, but what I want to know is where he is! In fact, I haven't the slightest idea where I am except that I know I am 32.5 miles from Birrfeld, on a heading of 150 degrees, but if I look around all I see are Alps all around me. I put the biplane into a hard left bank and look down for a reference point. There's a lake below, a small one. Not much help. A lake in the Alps is like a corn field in Nebraska. I radio to Mattias to give me a GPS fix from Birrfeld, but his reply is scratchy and broken. He is gone again. I climb again and pick up his transmission. "Michael. Do you see the paragliders?" I look up and see two paragliders floating above me! Incredible! What are these guys doing all the way up here at 9000 feet? And there's a plane. Probably the one they jumped out of. I radio back that I can, but as we found out later, he and I were looking at different jumpers. We were separated at that time by about 20 miles.

We traded radio calls for about 10 minutes, trying to piece together broken transmissions and identify where we were in relation to each other. I flew in a direction toward our home airport and eventually arrived at a spot which I recognized. It was easy from there. I was over an airport located between two lakes, and there was another airport in sight at the end of the lake to the north. From my chart I could see I was over Alpnach. I radioed my position to Mattias and he replied he would come to meet me. He arrived in about 15 minutes, appearing out of the cloud and mist and haze the same way he disappeared, as if by magic.

We continued to fly together for another hour and a half. This time I kept him closer, and never lost sight of him again. We stayed out of the mountain passes and kept low over the hills and valleys to the north. We explored valleys and lakes and little towns. We played at dog fighting and flew formation together. It was a great day to fly and I didn't want to stop but when a really nasty looking rain shower appeared out of nowhere and looked as if it might cut off our path back to the airport, I decided I had enough for one day and headed back for a landing.

Over Cokes at the airport restaurant, Mattias and I went over the details of how and where we got separated, and how several of our attempts to resolve our situation were foiled because of missed or unclear radio transmissions. We agreed that from now on, we would both keep a fix on the same GPS position, and that if we ever got separated again we would say our position first with altitude, then with distance and bearing to the GPS fix. One of the big problems today was that Mattias didn't bring his hand held GPS because he knows this territory so well he didn't need it. Since I didn't know the territory at all, the only thing I could use to identify my position was the GPS. It was as if we spoke different languages.

Another learning experience. Another great day of flying.