7/10/97
Riding The Edge Of The Storm
Ascona, Switzerland

The preflight weather briefing predicted heavy weather moving in from the west with a 40 percent chance of rain and thunderstorms at our destination within the next several hours. Our flight would take 2.5 hours. There was an alternate airport near the destination, but it was on the other side of a mountain. If the weather had already moved in when we got to our first choice, the low ceilings might already have closed the alternate. Mattias knows the terrain, and he said even under normal conditions there would be low visibility along the route. Go or no-go?

With all the other considerations involved, and especially a full load of gas and the possibility of retracing our steps back to safety, we decided to give it a try.

We departed the Cannes airport with a formation takeoff to the south, then turned east and along the shoreline, following the directions of a succession of controllers in Cannes and Nice, until we were past Monaco and left to our own navigation into Italy. The voices on the radio turned from French to Italian (my favorite!). There was heavy haze along the coast, but when we turned north at Savona it got awful, and I was thinking seriously of turning back. The conditions seemed worse because of the low broken cumulus hanging just inside the shoreline and the mountains we had to pick our way through until we arrived at the Bormida river valley, which we followed until we broke out into the clear at the huge Po river basin.

All the while we could see the big cumulus clouds to the west, building up with the heat of the day and the upslope air currents over the mountains, and being pushed toward us with every mile we travelled. It was a race to see if the weather would beat us to Switzerland.

The Po valley, in northern Italy is one of the most fertile regions in the world. There was nothing but green crops for as far as the eye could see in every direction. Not a square inch of land was unproductive. Keeping Torino's restricted airspace on our left and Milano's Malpensa airspace to our right, we threaded our way north to the other side of the Po valley and the higher elevations before dropping down to Lago d'Orta and our target Lago Maggiore. The photo below is Lago Maggiore, taken from just under the cloud deck. 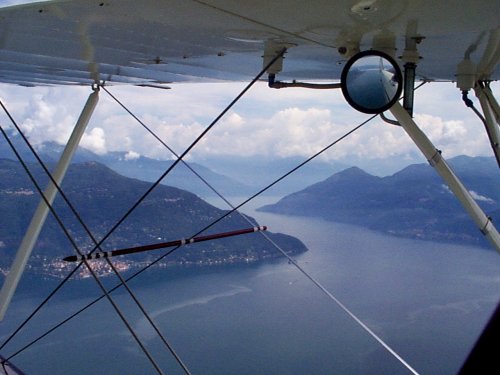 We flew this long, wide, and thoroughly beautiful lake for 30 miles with 4000 to 6500 foot mountains lining both sides. Clouds were hanging in the valleys and on the peaks, and there was still a light patchy morning fog laying on the water.

There are two airports at Ascona, but only one had Customs which was open at this time. Mattias has been to this field before, and it is definitely challenging. He told me about it ahead of time and let me decide if I wanted to tackle it. The downwind leg starts over the lake and at about mid field the ground rises up very quickly until you are only a hundred feet or so above the trees. The base leg is where you lose sight of the runway completely, and you must fly as close as possible to the very high mountain staring you in the face. When you are so close to it that it seems you are going to be devoured, you turn right for final and regain sight of the runway. It isn't over yet because you have some power lines very close to the approach end of the runway, and you must come in high and drop fast, get on the ground quickly and get on the brakes because it is a short runway.

Sounds easy, right? Maybe for someone who practices this kind of thing, but my trick landing skills are a bit rusty with so little flying over the last 3 months. But Ascona's challenging airport allows for a go-around and that's why I figure I'll give it a try.

I followed Mattias in the pattern, and he landed without incident.

My approach was too high at the base turn and when I was looking at that monster mountain coming straight at me, it was difficult to lose altitude, just a natural reaction. When I turned final and saw how high I really was, I put the plane into a very strong slip to burn off the altitude, but there was just no way I was going to land short enough to stop before the end of the runway, so I called over the radio I was going around.

On the second attempt I was braver on the base leg and got a lot closer to the mountain, and a lot lower, and when I turned final I was still high, but with the help of a strong slip I was able to get over the wires and onto the runway with plenty of room to spare. It wasn't a particularly pretty landing, from where I sat, but it was effective.

The controller had us park in the tall grass by the side of the runway. The grass is mixed with white and yellow and purple flowers, and clover, and with a distinct aroma of mint. It was such a delightful parking place, I had to take a picture. 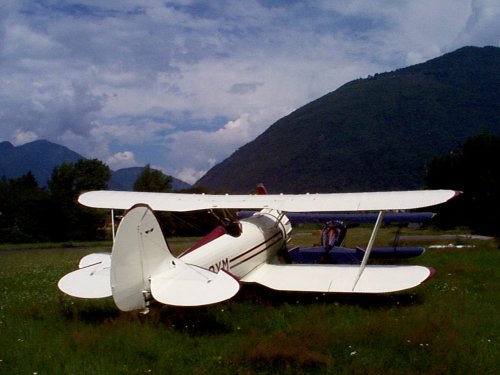 Mattias came over to me while I was still in the plane and congratulated me on the landing, and said "Welcome to my country, welcome to Switzerland", and we shook hands. Then he told me that he just found out that our alternate airport was engulfed in rain at the moment. We just made it!

At lunch, in a restaurant on the edge of the Lago Maggiore, I reflected that we heard French when we left, Italian en route, now they are speaking German and the menus are in German and Italian. Mattias is Swiss and he speaks all of these languages, and English, with ease. I've got a lot to learn! When the bill comes for the lunch, I realize that we're dealing with a whole new monetary system. I have only French francs and I need Swiss francs. And a new phone adapter for my modem! A lot can change in a two hour flight in Europe!

The hotel is even better than the one in Cannes, but less expensive. That was 4-star, this is a 5-star. We had a choice of staying at another 4-star, or this one, and the question was settled when I asked Mattias how many stars he felt he deserved! His answer was the same as what I was thinking: Six!! Here's the view from my room: (Mattias' room faces the town.) 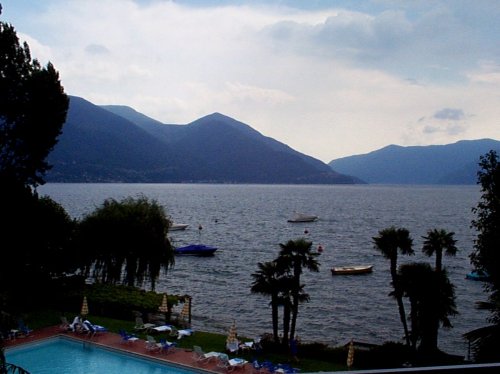 For the first time since I have been in Europe, I feel comfortable with the airport spec sheets. Yesterday I bought a complete set of Jeppesen books for all the airports in Europe, and they are all in English as well as the language of the country. The ones I had been sold in Paris were all in French, so all I could really decipher were the numbers (runway number, length, width, radio frequency), and that didn't make me feel that good. Now I can really understand what's going on!

We are about 90 minutes by Waco from Zurich, where Mattias lives. If the weather is good tomorrow, I'll get a chance to visit with him and his wife Nici and their 17 month old son Heinrich for a couple of days. I've been looking forward to this for a long time. I also want to get a real authentic Swiss Army knife with all the "stuff" in it! And some chocolate!!