Have you ever flown a biplane low over the coastline of the French Riveria? Have you ever slipped through the air just a few feet above a transparent turquoise sea? Have you ever done wingovers through a Mediterranean cloud? Raced a Donzi speedboat out of a harbor? Waved your wings in reply to the appreciative wave of a young lady sunbathing aboard a tycoon's yacht?

Well, I hadn't either, until today.

Mattias and I rolled down Cannes' runway 17 together, lifted off in formation and climbed out over the Mediterranean. Our mission was to fly east along the coast to Italy, then turn around and retrace our path to Cannes and continue farther west to the controlled airspace of Marseilles before we headed back to Cannes again.

The flight lasted 150 minutes from startup to shutdown, and I would have to search my memory hard to find when in the last 54 years I have more thoroughly enjoyed the passage of time. It could only have been when I was falling in love.

The fantasy lands named Cannes, Antibes, Nice, and Monaco appeared out of a light haze, each a magical apparition coming into focus and resolving itself in the bright sun, and then passing under my wings and back into the haze behind me. Villas and castles, villages and cities, solitary sun worshipers on isolated islets and throngs of beach goers on long sandy strips; sailboats and super-yachts, jet skis, swimmers, paragliders, helicopters, banner-towing airplanes, commercial jets, private jets, all these people and their toys, their vacations and vocations, their comings and goings were all a humdrum backdrop for two of the loveliest sculptures ever to take to the air: two open-cockpit biplanes, passing in review for everyone below to look up, breathe in, and sigh. An inspiration we were, I know it. We touched many lives today, I'm sure of it. I know we touched mine.

Here's a shot I took of Mattias and his Blue Wizzard, somewhere near Monaco. 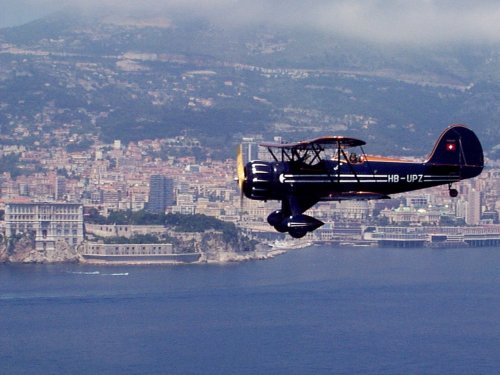 When we returned, we lunched at the Club Bar at the airport, and drank champagne and reflected on a great day of flying. From time to time during lunch, I would have the thought that any minute some French aviation official would tap me on the shoulder and say "Come with me", and handcuff me and send me to some dark dungeon where I could never again see the sky, my penalty for having so much fun. It must be illegal, I think. There must be some obscure law which is dragged out when someone is discovered smiling just too damn much.

Will I then be able to prove I really earned it? How can I prove the 30 years I've served in the preparation for these moments? What can I say when it is not enough to work hard and long for these rewards because so many others work harder and longer and still not get a break? Will I then be able to point to cancer and divorce and bankruptcy and say "See? I've endured!" Will the answer be that still others have suffered far more?

These are heavy philosophical questions. The only answer I have been able to come up with is that we are all doing whatever we are doing because it is supposed to be happening. It was more than 15 years ago when I was working at my computer by the window of my apartment by the Pacific, when I looked up to the sound of an open-cockpit biplane flying low over the surf, then pull up hard in a climbing turn and head back out of sight. I had never seen or imagined such a thing in my life, and on that day, I was inspired. I barely breathed the promise to myself: "Someday!" Great beauty is put in this world to inspire us. On that day 15 years ago, that pilot was doing his job, and today I was doing mine.

And today, I did my job very well.