The hotel we stayed at last night in Bourg en Bresse was built in 1853, and I think I slept on one of the original mattresses. One side of it had a very large depression in it, and I woke up in the middle of the night dreaming I had fallen into a hole and couldn't get out. This was about the worst hotel I have stayed at so far this trip. When I checked out, I resolved to upgrade my standards for future accommodations. I had no idea what was about to happen.

Matthias and I got together for breakfast and discussed the plans for the day. One option was to fly into Megeve, a small airport at an elevation of 4800 feet. It's a rather tricky place, a very short runway with only one way in, with no go-around possible, and a steep uphill runway. It required a special logbook endorsement to fly in there, so the only way we could get in was to land at a nearby airport and get two instructors to fly with us, show us the ropes, and get us legal. And the reason for all this trouble was because I was invited to attend a week long seminar and gathering of some high level aerospace people. I wanted to attend because a friend, Bernard Chabbert, had invited me, but I was not at all excited about landing the Waco at this airport, and Matthias was not interested in spending a week in one place. When I called my "friend" about our concerns, he got all bent out of shape and hung up the phone on me! Well, that sure eliminated the Megeve option from our possible destinations today!

Matthias suggested that he would like to fly to the Mediterranean, and especially Cannes. The route would take us through the French Alps, similar to the Megeve option, but we would be going south instead of east. It was a no-brainer for me because I love to fly the coastline, and I was really looking forward to flying in the Alps, and if I could have both in one flight, count me in!

From Bourg en Bresse we flew southeast for less than an hour to Chambery and landed for lunch. The airport is situated at the south end of a long lake, and bounded on both sides by high mountains. There I met another pilot, Henri Gavet, who took a liking to our Wacos and told me about his days of flying an old Kinner engined Fleet. A thoroughly decent fellow, he invited us drop in if we were on the west coast of France where he "had some vineyards" and we could be sure of a nice bottle of wine. After lunch we continued south, passing Grenoble, the site of past Olympic winter games. It was right around Grenoble that the scenery became unspeakably spectacular.

We flew down a valley that followed a series of lakes winding through the mountains all around us. Not just mountains, but Alps, a completely different kind of mountain than I have seen before. These are monsters, ragged rocky massive mountains with sinister shapes. One reminded me of a spiny backed dinosaur, another one looked like the Sydney opera house, another one was like something I saw in Monument Valley, New Mexico, but it was much larger and with its top hidden high in the clouds. The place was mountains on top of mountains, still covered with snow and disappearing into the haze and clouds so that it was impossible to tell just how tall they were. Sometimes the sides were sheer drops of thousands of feet of pure rock. A waterfall seemed to hang motionless, suspended in space, as it plummeted so far down it dissipated into nothing but vapor. I was spellbound.

My biplane transported me in slow motion as I wound through this earthen church, a place where God must surely be most pleased with his handiwork. I became aware that I was actually getting choked up about the experience of being in the presence of a power beyond anything that mortals can comprehend. This day the air was peaceful, and we slipped through these hallowed halls with grace and beauty, but we knew that another day this place could produce storms of such fury that our meager craft could be splintered in a flash.

I passed over lakes that were a startling turquoise color that I had never seen. I thought it could not be real, that there must have been some additive, some pollution to make it that way, but if the water in this remote place, from these sacred mountains, were polluted, then there is no hope for this planet. Is this what real water looks like?

Over one particularly breathtakingly beautiful valley, I thought that I could easily live here for the rest of my life. I would sit on my front porch, rocking in my chair, with a smile that would last forever.

All too soon, the mountains faded, the valley widened, and we were headed out into the flatlands, and toward the Mediterranean. Through the haze we could see the blue of the sea, and the orange tiled roofs of the houses by the shore. What minor turbulence we experienced in the mountains disappeared as we reached the coast. The air became so still that it was only the vibration of the big round engine that brought home the reality that I was really flying an airplane.

Matthias slipped ahead of me, according to plan, and called the controller at Cannes, receiving permission for a flight of two Waco biplanes to land. We turned left over the sea for about 5 miles, then headed back toward the shore for a left downwind entry to the pattern. The wind was about 15 knots, and only about 30 degrees crosswind, so the landing was uneventful. We parked the planes in the grass area behind the terminal, tied down and headed for the terminal. 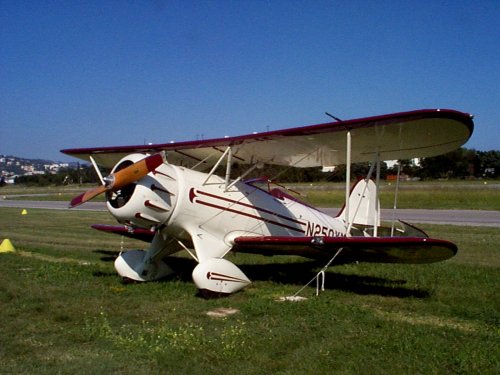 We popped open a bottle of champagne and celebrated life, two of this world's luckiest guys, biplane flying, and the good life in Cannes. When the bottle was gone, we caught a taxi to what has got to be be the finest hotel in town.

This is the high season in the south of France, therefore the costliest, and this being a top of the line 4 star hotel, they are taking a real pound of flesh for the rooms. But the way I look at it, I'm just paying them some of the money I saved by staying in all those dingy, dirty, old hotels for the past month. We are on the beach, of course, and the rooms look out over the Mediterranean and the private yachts anchored offshore. The lobby is alive with the comings and goings of some of the most beautiful people in existence. If we are going to build a master race, here is the place to collect some DNA. I would love to hear some of the stories of these people. One does not come to a place like this without having done something interesting to earn it.

I could go on and on about what a fine hotel this is, about all the amenities, the service, the cleanliness, etc. But the thing that really struck me was the fact that the same person who registered us at the front desk walked us to our rooms, and when I saw the two single beds in my room, I expressed my preference for a king sized bed, and without missing a beat, she said she could have the bed changed out right away, and she did! This was the first time I have seen a washcloth in a hotel in more than a month. And a real shower! But this one has automatic temperature control and more control handles and water spouts than I have been able to figure out what to do with. And terry cloth robes! I am in heaven!

We like it so much here we're going to stay another day. Tomorrow we figure that we'll fly down the Italian coast and back. But then you never know! That's why it's called an adventure!