Today is the end of my stay in Nangis. It's time to say goodbye to my new friends Helene and Rene. They promise to visit me when they come to the US, and keep in touch by email. Rene helps me with last minute preflight planning to Bourg en Bresse, at the foothills of the French Alps.

The mission today is to meet up with Mattias Zuellig, the owner of a Waco biplane identical to mine, except that it is a very handsome dark blue. He calls it "The Blue Wizzard" (photo below). He lives in Zurich, Switzerland, and will be flying west to meet me at Bourg. From there we will be flying around Europe for the next month. 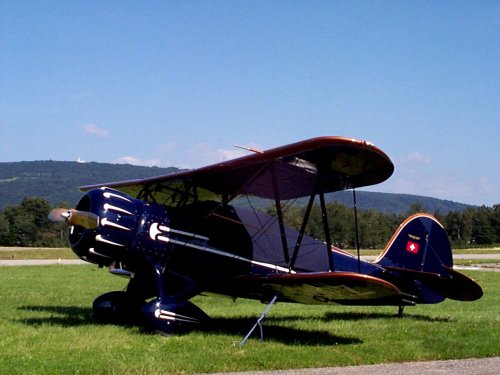 I plan my flight as meticulously as possible, drawing my course line on my charts, checking for obstructions, making notes on a separate piece of paper with the checkpoints and their frequencies, runways, pattern altitudes, etc. (The separate paper is needed as a backup in case the primary navigation chart blows out the open cockpit. It hasn't happened to me yet, but it could. It's also a lot easier to read my own notes than the printing on the charts.)

My plan is to leave after lunch. I use the time till then to top off the fuel tanks, and load the baggage. I also remove the front windshield and cover the front cockpit with a snap on cover. This makes the plane look much different, longer in the nose, stronger, much more like a vintage fighter plane (possibly because it is now a single place aircraft). The big advantage to me is that the visibility is greatly improved with the front windshield removed.

Helene's father Serge joins us for lunch. There's a good bit light and friendly small talk, but it's like we are really just trying to forget the fact that we will soon be parting, new friends who will not see each other for a long time. I really like these people, and I would like them even if they didn't do my laundry, clean my plane, give me hangar space, save my life, etc.

Back at the airport, Serge helps me pull the Waco out of their hangar one last time. Rene helps me with some radio frequencies I'll need to get through some low level military training routes. Helene gives me a hug and one of those two-cheek French kisses. I fire up the Waco, taxi out to runway 6, lift off into a light left crosswind, turn right to a heading of 150 degrees, and I'm gone.

This flight was 171 nautical miles (about 200 normal miles), as the crow flys. There was a scattered to broken layer of cumulus clouds at about 2500 feet, and I stayed below them for the entire trip. The turbulence was really not bad at all.

When I got to the military low level jet training areas, I tried to get Dijon tower on the radio, but they didn't answer, maybe because I was flying too low, so I just kept on going, but kept my head on a swivel, looking for traffic coming at me at 450 knots. Yeah, right! If I could spot traffic like that, they would be past me before I (or they) could react, so I just kept lower than they would probably be flying, out of harm's way, and turned on my transponder, hoping they could pick me up on their radar. As it turned out, I never saw any military traffic the entire flight.

The French countryside is a pure delight. Everywhere below me were gently rolling hills covered with farms and pastures for goats and cows. All of the farms seem to have been there forever.

For the entire duration of the two hour flight, I never talked to anyone on the radio, except at the last minute when I was descending into Bourg en Bresse. They have a hard surface and a grass runway, and I had announced my intention to use the grass, but a voice came back over the radio that the grass was wet and soft and that I should use the hard surface. The wind was probably over 15 knots, but it was right down the runway, so the landing was easy.

When I taxied up, there were already a small group of curious locals waiting to check out this alien craft. One fellow said that there has never been a Waco at this field.

In France it is normal to have to pay a landing fee at airports. When I signed in at the main desk, the official waived the fee, because "you have such a beautiful airplane". A new friend, Karim Jarraya, a young pilot of 26 and of Tunisian descent, was very helpful with the language challenge. We sat on the patio and sipped Cokes while waiting for Mattias to appear in the pattern with his blue Waco. If the locals thought it was great to have one Waco here, they must have flipped when they saw TWO all of a sudden.

Karim tried to get us hangar space, but it was not available, so he lent me some screw-in tie-downs to keep my Waco safe from the raging north wind (called "Mistral" in these parts). He also helped push our planes into the grass for the night, and then drove us into town to a hotel. What could I do to repay him for his kindnesses? I offered to treat him to dinner with Mattias and myself and he jumped at the chance. I guess young pilots everywhere are eager for a good meal!

And what a meal it was. I can't begin to describe it all, but each forkful was sublime. Mattias chose an awesome wine, a St. Emilion. For desert I had an apple tarte (tarte ta tain?) with an oversized bucket of fresh mildly whipped heavy cream. And a cafe gran creme. I was completely stuffed, incapable of eating even just a little wafer. After a meal like that, I am overtaken with a sense of delirium, and my body moves about lead by my belly, much like a large ocean going tanker. I hope I leave France soon, I can not keep eating like this or I will surely explode.

Or I will need a bigger airplane.