I spent the morning catching up on my journal and waiting for the weather to improve to the ideal conditions I knew would be achieved later in the day. Sure enough, at around 3pm, the wind dropped to almost nil, the sky became blue, with small white clouds that looked painted in place.

Rene helped me roll out the biplane and we taxied to the pump for fuel. They don't take credit cards for avgas at many of the smaller airports in France, so it's important to keep lots of Francs on hand. During the refueling process, we attracted a lot of attention. There were probably more than 30 people milling about checking out the plane, and plenty of complimentary comments. It would be great if I could speak French. I know that they felt as uncomfortable as I did, not being able to communicate their feelings.

It's Sunday, and the most ideal flying day in many weeks. It seems that there are more people out flying today than I have ever seen for such a small airport. And the variety of aircraft is even more delightful. There are the normal training single engine aircraft, of course, and aerobatic planes, and there are ultralights, and lots of gliders, and even a jet Vampire comes by for a low pass. We are talking a really, really busy little airport. So I'm definitely going to be bringing Rene along for the ride, so he can help spot the traffic in the pattern, and handle the radio in French.

I did a few touch and go's, the first couple of which are marginal (for a perfectionist such as myself, that means that they were OK). The third one was quite nice. Then we took off and left the traffic pattern to go play in the sky.

This is the 3rd day in a row that I have been flying only 3 hours in the last 3 months, and I am just now starting to get the feel of the plane again. I climb up to 3500 feet and do a few wingovers and some tight turns and now I am feeling immensely better, so I turn the controls over to Rene. He does some even tighter turns, and a few even nicer wingovers and turns the controls back to me. So I just had to play a little bit more and then took the plane back to the field for a final landing. I really wanted to land on the grass, but with all the gliders using the field, they have priority on the grass, and I had to use the hard surface.

We were in the air only about 40 minutes, but it was heaven! We played in the sky like children.

Actually it wasn't total play. Some of the time I was checking the accuracy of my HSI, which performed flawlessly. I needed to be sure it worked properly under radical heading and attitude changes. I am going to need it tomorrow.

Helene was waiting for us when we pulled up in front of the hangar and shut down. She could tell that we had been having more than our share of fun, probably from our ear-to-ear grins.

At this time of year, and especially with all of the low level flying and grass landings of the past few days, we collected a lot of bugs on the cowl, landing gear and leading edges of the wings. Helene suggested that we should take some time to clean the plane, and Rene also wanted to pitch in, so my natural laziness was outvoted and we all grabbed a rag and worked for an hour to put the Waco back into pristine condition. Helene took a break long enough to catch Rene on the ladder debugging the top wing. I'm more safely sitting on the ground cleaning the landing gear. 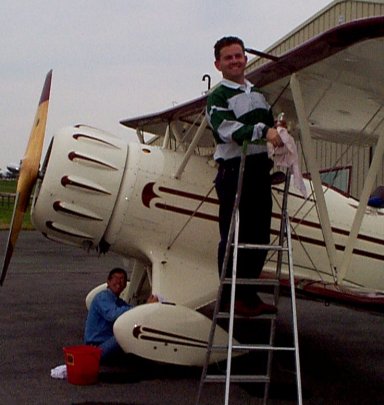 The hotel I stayed at my first night in Nangis is closed on the weekends, so Helene invited me to stay at her house last night. Since she has been following my adventures via these emails for a couple of weeks she knows that I am always short of clean clothes, so she made sure that my laundry was taken care of.

It's starting to sink in. I have met some really super French people with Rene and Helene. Let's recap here: Rene saves my life by avoiding a mid air collision, they invite me into their home to stay for a couple of days, free breakfasts, do my laundry, free hangar space, and even insist that they help me clean my plane! I ask you, are these French people great, or what?