Ever since I have been in France, a full 30 days today, I have been told by every pilot I have met that I simply MUST visit La Ferte Allais. Actually it is the second thing they say to me. The first is in the form of the question: "Have you been to La Ferte Allais yet?" It is expected that any pilot who visits France will soon go there. When they find out that I have not yet been there, they look at me sadly, as if I have nothing in common with them, and then they say "You MUST go there".

It is Mecca for French pilots, and I can see why. It is a wonderful little airport in the countryside just south of Paris. There is no hard surface runway, only grass, and the grass is well tended and the surface is quite smooth and plenty wide.

My visit there today was finally achieved with the assistance of my new friends Rene and Helene. Since it is a private airport, it is necessary to call ahead to get permission to land, and Rene handled this for me. He and I were both surprised that the people at La Ferte Allais were already aware of my Waco being in France, and that I would soon be going to Megeve (in the French Alps), that I was a friend of Bernard Chabbert, and were looking forward to welcoming me to their airport!

Rene and Helene crowded together into my front cockpit and we lifted off from Nangis for the less-than-30-minute flight to La Ferte Alais. The sky was very cloudy, with a ceiling at about 1200 feet above the ground, but it was not raining, and it looked as if it might clear later in the morning. The wind, while straight across the runway, was less than 5 mph. There was a slight chill, so I kept warm in the air with my new lucky blue cashmere scarf.

Approaching La Ferte Alais from the air we could see a big DC-3 with WWII Normandy "invasion stripes" painted on the wings sitting beside the grass runway, with other very interesting planes, not so easy to identify, parked all around, and there were lots of good sized hangars which promised other goodies inside.

Whenever I approach a new airfield I am always very cautious, looking for any traffic on the ground or in the air, looking for the windsock to figure the wind speed and direction, which runway is in use, trying to determine any special conditions which might exist, etc. I was concerned that the recent rains might have caused puddles of standing water, or muddy areas, but it looked to be in good condition.

So all the physical conditions were good, but the mental conditions were still being resolved. My mind is processing the fact that I am about to land at a most famous, possibly the most famous, airfield in all of France, a place held in high esteem by them, a place where surely there would be many good pilots on the ground watching my approach and judging my landing, and my overall performance as an aviator. Yes, I would have an audience of some very critical people, and they knew I was coming. I had to give it my best. I had to be worthy of my beautiful airplane, and I even imagined that I would be representing all American pilots among the best pilots from France.

All of this weighed heavily on my mind as I crossed over the runway at pattern altitude and cut left downwind, then base, then final. Rene handled the radio, calling my position and intentions in French. On final I was a little bit high and burned off some altitude with a slip, which I'm sure must have looked nice from the ground. I flared a bit high and the plane dropped in from a foot or two, but the wet ground was very soft and the drop was not rough at all. In fact, it was really very pleasant. The best part of it all was that it was a perfect three point landing. I felt that I could have done better, but it was not completely graceless. On balance, America was well represented this morning.

The rollout was very smooth and I taxied back to the parking area, taking care to avoid the wet areas on the advice of Rene. As a final flourish, I unlocked the tailwheel and powered up slightly while holding the right brake, swinging the plane around in a tight 270 degree arc, to park facing the runway. I was aware immediately of the many people who were watching, and the several who were walking toward my plane for a closer look.

Soon we are greeted by Mr. Jean Salis himself, the owner of this great place. Helene translates for us as he welcomes us and invites us to have lunch at his special table in the airfield restaurant for lunch, where he will join us later.

Suddenly, I realize that I am ravenously hungry, and since it is lunchtime, we head directly for the restaurant, and are seated at the biggest round table in the center of the room. The table seats about ten, and there are already a few men seated there. Since I know no French, Helene sits next to me and translates the remarks going around the table.

The table fills up quickly, and now we are all men of aviation (Helene is the sole female) gathered for lunch and to exchange the news of the day. One of the topics, I can tell without translation, is this American fellow who has come in his Waco, a nice plane even if it is American. Some of the other remarks I can also tell simply by the tone of voice and the gestures, are the stories of flying, men bragging about their deeds, some showing off for the lady present, others outdoing each other for the sport of it, some putting others down in order to build up their own inferiority complex.

Helene translates it all, even the fellow who remarks that I couldn't be a real biplane pilot because I am eating no meat, only vegetables, and no wine with my meal, and I don't smoke. He remarks also that I would be better off back in America with it's black people (not the term he used). I am taking it all in, smiling politely at this boorish fellow as if his humor is pleasant to me. He is cutting his meat with a large and menacing folding knife which he as taken from his pocket, and I am not about to pick a fight with a man with a knife and bad manners.

Hanging on the walls of the restaurant are paintings and photos of great planes and great aviators, and one of the great Mermoz hanging higher than all the others. Only slightly lower is the photo of Mr. Jean Baptiste Salis, the fighter pilot from the First War, and the father of the current owner of La Ferte Alais. There are pictures of great fighting machines such as the P-38 Lightning, Mustangs, Yaks, and other warbirds. There is even a great photograph of a very old Bleriot flying toward the white cliffs of Dover, the first airplane to cross the English Channel, in 1908.

The bar at the end of the room is limited to only about 8 seats, and behind the bar there hang aviators caps from many wars and many airlines. I wonder what great feat of courage it took to earn the privilege to have one's hat hang behind this great bar. And I wonder what great stories this bar could tell of the men who drank here over the years.

Back at our table, my new "friend" with the knife is drinking more and behaving poorly, but he gets no rise from me. When he cleans his knife and folds it away, and feeds the last scraps from his plate to his dog sitting by his side, and rises to wrap his white silk scarf (I swear it's true!) around his neck, puts on his aviator sunglasses and flying jacket, and looks in my general direction as if to see if I have had enough abuse, I rise and offer him my hand, with a smile, and speak "Bon Jour". I have learned over the years that it is important to deal with one's enemies with pleasant behaviour. It confuses them wonderfully!

I was told later that this fellow had already wrecked two airplanes.

All around were the spirits of great men and great flying machines, living and dead. This place had seen so very much of the history of aviation. And these living men knew it. The place was awash in testosterone!

After lunch, Mr Jean Salis joined us briefly and invited us to tour the hangars. What a wonderful collection of airplanes! I can't begin to tell you of the great aircraft he has there, you just have to see them for yourself. Only a couple were familiar to me, the F4-U Corsair was my favorite, and the big yellow Stearman was Helene's long time favorite. I asked her if she had ever sat in one, and when she said no. So I asked an official standing nearby if it were possible for Helene to get in the cockpit, and "Voila!", one happy lady in her dream machine! See photo below: 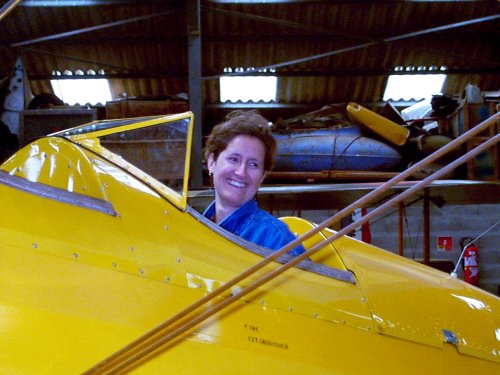 The assistants at the museum were very helpful, and even let me sit in the cockpit of the English DeHavilland Speed Dragon, a wonderful WWII twin engine transport which had such great looks I was mesmerized by it. There were probably more than 50 airplanes, most of them flyable, most of them original. There were several one-of-a-kind aircraft from the very first days of aviation, such as the Bleriot, Breguet, Morane and Caudron. Some were replicas specially built for movies, such as the Spad and the Fokker Triplane used by the German multiple ace Baron von Richtofen (who was finally shot down not too far from here). The place is a national, no a global, treasure.

Too much to see in one afternoon, we had to get back before the gathering clouds closed in. When I started up the Waco, one of the faces in the crowd gathered around was my "friend", whose smile and thumbs-up seemed to me to be genuine, a sign that my beautiful biplane had made another convert. We rolled out onto the grass runway, and lifted effortlessly into the air, climbed to pattern altitude, turned left downwind, then rounded off the turn to base and final, decending sharply on final for a long low pass for the admirers below.

On the way home, Rene guided me to Fontainbleau, the great summer palace for the Louis XIV. Louis had style, for sure!

Back at Nangis, I chose the grass runway this time, and just loved it of course. America need more grass runways, especially in California, near my house!