The hotel where we are staying, as well as this entire corner of Sardinia around the town of Porto Cervo, was created out of dirt about 30 years ago by none other than The Aga Khan, one of the most incredibly wealthy individuals in the world. Needless to say, everything around here is first class. Some very large private yachts are in the harbor now, with more arriving each day to celebrate the beginning of the season which starts this weekend. Today the smallest ship in the Aga Khan's private fleet of luxury motor craft arrived in the harbor. His smallest is still the largest boat in the local waters!

Along with such first class digs comes a first class staff. We have been befriended by two of the staff at this hotel, and they have gone way beyond the call of duty and shown us very personal attention and favors which have made our stay exceptional.

One is Alesandro ("The Animal"), and the other is Dario ("The English Lord"). I'll leave it to your own common sense to distinguish from the photo below which one is which. 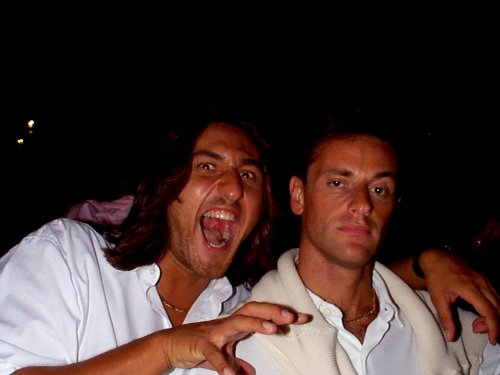 Alesandro is the nightly entertainment in the hotel lounge. He is very talented, a complete one man band, singing and playing the keyboard accompanied by his computerized sound system. When I needed the special adapter to hook up my modem to the Italian phone system, it was Alesandro who took time out of his day to drive me in his car the 2 hour round trip to the nearest city.

During the drive through the narrow Sardinian mountain roads, Alesandro told me (in his very limited English) of his love for music, and how he cannot bear to play the same routine each night, he just must do something different each time, because he is a creative person. He told me of the Italian man's order of priorities (1. Women, 2. Wine, 3. Food, 4. Sport 5. Work), and confessed that maybe he only had the first 4 in his list of priorities, and that number 1 far overshadowed his interest in any of the others.

He was driving at high speed, passing on turns, and all the time he was talking with the assistance of very Italian sweeping hand and arm gestures. For some strange reason, I never really feared for my life. It was clear that he was in his element. Even when he told me "I am Animal" (referring to himself, of course), I easily could see that his self image was completely accurate. He is 29 years old, and has experienced Europe's best luxury resorts because of his talent. He cannot possibly imagine ever being married, and has no plans for the future beyond next weekend. When I agreed that he did indeed seem to be an animal, he corrected me quickly: "No, I am not AN animal, I am THE Animal".

Dario is quite the opposite in many regards. His English is quite good. His busines card identifies himself as a "Barman". He works the poolside bar during the day, and the bar next to the lounge where The Animal entertains at night. The two of them are very good friends and have worked the season at this hotel before. Dario is the epitome of "The English Lord". He is quite refined, wears a double breasted suit when he tends bar in the evening, and his manners are impeccable. When I mentioned that I needed the phone adapter for my computer, and that the people at the front desk were clueless and unable to help me, he was the one who took the time to understand my needs and phone around to find the needed part, and then asked Alesandro to drive me to make the purchase. Although different in many respects from Alesandro, Dario's priorities in life seem to be identical.

It was Dario and Alesandro who guided Sean and I to the local discos and made sure that we were treated well, and introduced us around. Without their assistance with the language and the customs and the right places to go, our visit would have been much less interesting.

Today we toured the local very private yacht club, which would have been off limits to us if Sean had not had a letter of introduction faxed from his club in San Diego.

Some observations on the cultural differences between Italy and Southern California: There is no focus whatsoever on health except to have a good tan. There are no health food stores, no vitamins, no low fat foods, or reduced cholesterol foods. There are virtually no no-smoking sections in the restaurants.

However, the Italians are much more enlightened than the French in one respect: They do not allow you to bring your pets into the restaurants. I remember vividly one restaurant in Paris where a very well dressed man and woman came in to dine, accompanied by their huge long haired dog. The dog was almost bigger than the man's wife! It had been raining, and of course the smell of wet dog is unmistakable, especially in a small crowded restaurant. It was an exuberant animal, probably pleased to be out of the rain and smelling some good food, and demonstrated it's pleasure with large sweeps of its tail, brushing patrons on both sides of the aisle. The French were quite unperturbed with all this, but I just couldn't believe it!