With every resolve to return to Paris this morning, based on The Weather Channel's forecast of partly cloudy for the next few days, I called Helene in Nangis, France to be sure the weather and the plane were ok for flying. Don't believe The Weather Channel. The weather in France was awful. Raining, low ceilings, and cold. We tuned in to CNN International for their latest weather forecast and they forecast the nasty weather for the next 7 to 10 days. I called our hotel in Paris and they said that everyone in Paris was depressed and sick and desperately waiting for Summer to come. It has been terrible for weeks, without stop.

There was no reason to go to Paris and be cold, wet and miserable. The only question was where to go? Sean wants to go to Scotland as soon as the weather gets better there, but it is still yucky, so pass on that. Majorca seems like a good bet. But Sardinia is just a one-hour ferry ride south from Bonifacio, just down the road from Ajaccio.

And so it was that we checked out of our hotel in Ajaccio, drove south to Bonifacio, and took the ferryboat to Sardinia, then drove southeast to Porto Cervo. Here's a parting shot of the ancient walled city of Bonifacio, taken from the ferry. 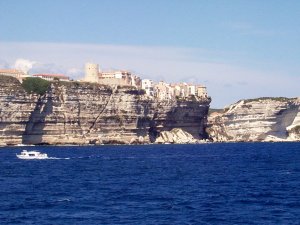 To me, this is what an adventure is all about. When I woke up this morning, I thought I was going to Paris to fly, but intead I've taken a ferry to Sardinia to stay warm and explore a new place.

Sardinia is a part of Italy, so we had to show passports to get on the ferry, but there was no Customs at the Sardinia end. Very relaxed atmosphere. There is no mixed identity of French/Italian/Corsican as there was in Corsica, here it is pure Italian. I love to hear Italian spoken. It is just so expressive and lyrical and emotional.

Laundry is high on our priority list. The hotels in Corsica didn't have any laundry facilities, so we are down to our last clean clothes. They will pick it up tonight and have it back tomorrow night, so we will have to stay here for two days. After that, who knows?

The hotel we stumbled into is probably the nicest one I have stayed at this entire trip. And that's not saying a lot, really. But it is good to have some nice thick towels for a change. And Varushka (Russian name but very Italian) has been very friendly and helpful. The money is very different. I'm not used to paying 160,000 of anything for a room for the night, but here the lire trades at 1500 to the dollar, making it all seem like Monopoly money. Even the smallest denomination paper note has three zeros. It takes some getting used to.

Connecting to the Internet has been a challenge. The hotel in Paris had a rotary phone system and no matter what I tried, even an acoustic coupler, I could not get my computer to dial out properly from my room. The solution was to bypass the PBX and use the fax line at the front desk. This same approach was used in the hotel in Corsica. It was inconvenient, but effective. The only thing I needed was an adapter to get the US style phone plug to work with the French style outlet. I knew I was going to be in France, so I brought this adapter with me from the US. Now that I have found myself unexpectedly in Italy, and I have no adapter for this country, I'm scrambling around trying to find a store that would have it. This is no small problem.

Computer communications has always been fraught with challenges. Getting dis-similar hardware and software to talk to each other is never an easy thing, even in this day and age. Considering the added difficulties associated with foreign countries, not just the adapters required but also the PBXs, the phone company hardware/software, the time zone differences, the local Internet connections (if any), I'm surprised that things have been going so smoothly.

There will be times when my daily email just doesn't get through, and it may even happen for several days in a row. So don't be overly concerned if it happens again. It's probably not a problem on your end.