Slowly seeping into my consciousness is the awareness that I have been asleep for a very long time, and just now I am waking up to a world much larger and more varied than I ever imagined.

I was 40 years old before I ever applied for a passport, and even then it was only because a friend, a citizen of Ireland, when he learned of my deficit, was so incredulous that I felt as though I might as well be missing a limb and not have been aware of it. Until that time, my "international" travel had been limited to a couple of islands in the Carribean, on brief vacations. There just had never been any "reason" to go elsewhere. I had more than enough opportunity in my businesses right in the cities where they were established (Philadelphia, Chicago, San Diego, etc).

It was the gross unemployment in Ireland, and the natural focus of Ireland in the European community, which led him to leave his little island home, selling candles to churches throughout Europe, then Canada and the US. When we met, therefore, he had significant appreciation for the benefits of international travel, commerce, and a global perspective. I, on the other hand, was blissfully unaware of my ignorance.

He was amazed that Americans, for all their global power, for the most part were so provincial and uneducated, so self-centered and unaware of the diversity of the planet. His extensive travels had shown him just how much more he had to learn. Fiercely Irish, he was astounded that I, with a name like Michael McCafferty, had never been to Ireland, and in fact could not even point to the place on the map where my ancestors were born. Oh, of course I could point to Ireland, but I had no idea where in Ireland they were from. This embarrassed me greatly, and after a quick call to my father I felt much better that I could at last point to Donegal, on the west coast of Ireland. But I still new nothing of it, nothing of the history of Ireland, the troubles my ancestors were made to endure, the famine and oppression which finally forced them to leave their home, the beauty of the land, and the people who live there now, their thinking, their hopes and fears.

Reflecting on all of this, it seemed to me at the time that while I had lived well and had succeeded in business, I was woefully uneducated. At his suggestion, (insistence!) I finally applied for a passport, took my first trip to Ireland, and started my elementary education as a citizen of the world.

My business at the time was focused on the huge market for software in the USA. There was more than enough to deal with in the domestic market. At early trade shows, people from Europe, Asia, South Africa, and Australia all wanted to buy my product, but I resisted dealing with foreign countries because I wanted to stay focused on the main vein of gold in my home market. It was only when I needed the money badly did I finally relent. I grabbed my passport, jumped on a plane, and swapped digital bits for francs, pounds sterling, and other suspicious-sounding coin of the realms which I visited.

The urgent need for the money cut my travels to an absolute minimum. Grab the money and run. Thank you very much, have a nice day. Gotta get back home to pay my bills. Call me if you have a problem.

There was no appreciation for where I had been. It was treated as a gross inconvenience to have to leave my comfortable apartment by the Pacific and breathe the smoke filled air of the planes, live out of a suitcase, try to communicate with people who were so ignorant that they didn't even know English! What could possibly be wrong with their education system that they wouldn't even teach their children English. What a disadvantage! How could they survive in the world today. How could I have been so naive?

Over the next several years, there was more international travel, virtually all of it on business, and with similarly profitable but sterile results. It was only just barely seeping into my being that there was something out there, something going on, that is compelling. Australia, Singapore, India, South Africa, Switzerland, England, Ireland (again), France, Netherlands, Portugal. In just a few years, I had been to more places than most people I knew, but I had only "gone to places", I had not really travelled. I had no real depth of understanding, no appreciation for where I had been.

And now I am here in Corsica, with its wonderful mixture of Italian and French culture, but with a heart that beats only "Corse", its placement at the crossroads for vacationers from all over Europe, its history measured in millennia, a climate and a people just perfect for relaxation, open discussion, and learning. Here I am awakening to the richness and diversity of our planet. I am a global infant, virtually unable to communicate, barely able to move about without assistance, innocent of everything good and evil, a sponge soaking it all up with enthusiasm.

In some reading just before leaving on this trip the words leaped off the page "There is no educated man who has not travelled widely". My reaction at the time rebuffed the author as elitist, but now I find myself agreeing. 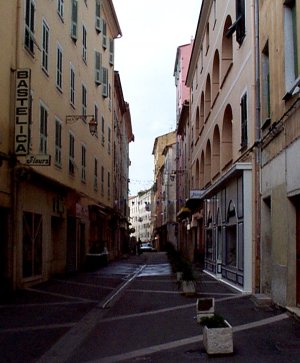 This afternoon, in a walk through the town of Ajaccio, we met a seller of souvenirs, and because of an extended rain shower (the weather in Europe has followed us here!), we enjoyed the protection of his shop from the storm, and learned of his country. We heard him speak of the forces within which are much like the IRA in northern Ireland, who fight for independence and the true Corse identity. There are the occasional bombings of public buildings and the "discouragement" of overdevelopment of the natural beauty of the island. This answered our wondering about why there were not more international first class hotel chains represented on the beaches, why such a paradise were not more commercially developed.

The Corsican flag flys proudly above the French: 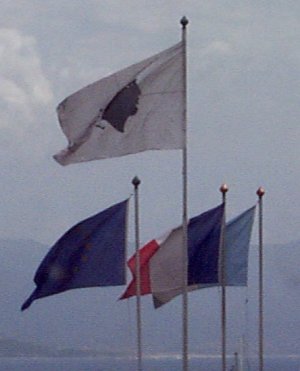 A large cruise ship was in port today, so the town was filled with more tourists than before, and there were more English and German and Spanish languages in the mix of French and Italian. 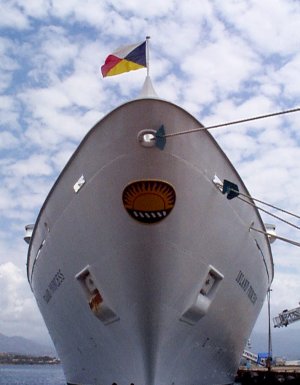 This afternoon we visited the Museum of Cardinal Fesch. It contained some paintings dating as far back at the early 13th century. Most of the works depicted famous saints being martyred, the crucifixion, last supper, and other topics which a Cardinal would find appropriate for his private collection. The stuff was all very dark and dismal, so we bailed out into the sunny streets after a quick tour. Later tonight, there will be an outdoor Italian film festival in the courtyard of this museum. That sounds like a must-see!

The persistent low pressure system over western Europe is moving east, and the giant high pressure system should be over Paris by Tuesday, so we are returning to Paris on a mid-day flight tomorrow. If all goes well, we'll be flying on Tuesday afternoon! Wish me luck...