There are two distinct dimensions to the town of Bonifacio, and when I wrote yesterday I had only experienced Bonifacio as the harbor village. For dinner we walked up a very steep and very old cobblestone street to the top of the hills overlooking the harbor. It is at this vantage point that a great walled city and fort were built, sometime around the 12th century, and today it is very much the same as it has been for hundreds of years.

Entry to the fort, on foot, is across a drawbridge, designed to be raised in time of attack. Past the main gates, the city is a maze of extremely narrow streets, and very narrow doorways with unbelievably steep steps leading to the upper floors of the dwellings. Some of the buildings are now restaurants, and many of the buildings are still inhabited by the locals.

The entire city is built on the peak of the hill between the harbor and the Mediterranean. Much of the perimeter of the city, on the Med side, overhang precipitously over the waves which are eating away at the supporting hill below. This process has been going on for hundreds of years of course, but the place is still standing, although when you look at it from the side, it seems that the whole city is going to collapse any minute.

It's the kind of place that, when your dinner is finished, it starts to seem prudent to go back down to the harbor village and have desert, where it might be a bit safer!

This morning we packed up and said sad goodbyes to the very friendly and helpful receptionist, Valerie, who brought even more sunshine to our visit. 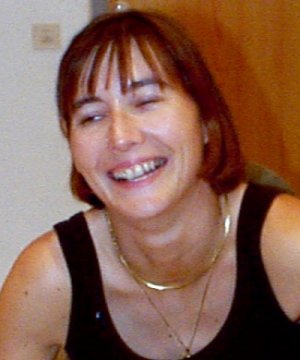 We drove north, along the west coast of Corsica. The road is a tortured stretch of about 100 miles which reminds me a lot of the drive along the coast of California between San Simeon and Big Sur. Each turn in the road presents you with a spectacular view of the Corsican coastline or else a view of the interior forest or farmlands. Every few dozen miles there is a small town which has been held in suspended animation for hundreds of years, including the people!

At one such turn in the road, the view was so awesome that I just had to stop at the roadside restaurant, have lunch, and take some quiet time to absorb it all. There were just a few people enjoying the beach below us. The day was sunny, and very comfortably warm. For the first time on this trip, I noticed that the European preference for sunbathing topless has extended to Corsica. Here's a picture of Sean, enjoying the local scenery! 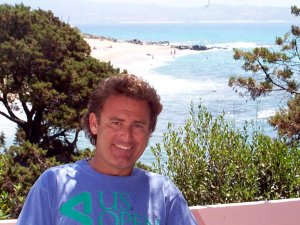 Our destination today was Ajaccio, the largest and most cosmopolitan town in Corsica, its administrative capital, and the birthplace of Napoleon Bonaparte. It was only a short walk from the hotel to the beach, so we headed there first and found considerably more evidence of Europeans' complete disdain for the American need to wear both parts of the bikini. Having amassed considerable visual experience on the matter, and after virtually non-stop discussions on the topic, Sean and I are both in agreement that the Europeans have achieved superiority in this area. I would present detailed photographic evidence for your further consideration, but I'm concerned that my next e mail might originate from a Corsican jail. You'll just have to use your imagination.

We found an English newspaper which announced that Britain was having the rainiest June in 15 years, and is expecting it to be the worst in 100 years. The weather forecast is for more of the same. There is a huge high pressure area off the west coast of Ireland, but it is stuck in place by the low pressure area sitting over western Europe.

We all know that the rains have got to stop sometime soon, and when it does, I will by flying the biplane again. This is very similar to the time during last year's tour of the US, where we were stuck for 9 days with rain and low ceilings in Lansing Michigan. I am focusing on the more positive aspects of this trip, finding sunshine in areas where even in the best of weather the Waco would not be going.

Patience is the key. In the meantime, when I am driving along these coast roads, I am not really driving. I am flying my open cockpit biplane. And in the moments before I fall asleep at night, I am touching down on a soft grass field.