As we were checking out of the Hotel Roi Theodore, just outside Porto Vecchio, Sean met a couple of guys who immediately identified him as a Southern Californian. After a brief conversation he found that one of them was a pilot, and mentioned the biplane trip concept (that's about all it is right now, a concept!), and then brought them by my room so they could see a photo of the Waco.

We all had a great conversation about Europe, the horrible weather in the north, Corsica, and the local attractions. It was when we turned the talk to flying that our new friend and I really hit it off. He kept me spellbound with stories of north and south transatlantic crossings, his Beechcraft D-18 which he keeps at Santa Barbara, his working to certify a new composite seaplane, etc, etc. He was here in Corsica for the wedding of a friend, but he had homes in Madrid, Santa Barbara, the Phillipines, and somewhere in Germany. He suggested that the best flying in Europe would be in Spain, because of the weather, and even offered to let Sean and I use his home in Madrid. What a generous gift!

It was only when we were parting, and exchanging e mail addresses did I find out that this extraordinary person is none other than Iren P. Dornier, Chairman of the Board of Seair, Inc. Now for anyone who knows the great names in aviation history, the name Dornier is right up there at the top of the list. It was difficult not to like him immediately because of his youthful enthusiasm for flying, even though he has had many years of it under his belt.

A short drive down the southeast coast of Corsica from Porto Vecchio is the southernmost village of Bonifaccio. This little town is much more lively and picturesque than where we were yesterday. In fact, it is just wonderful.

The weather could not be better. It is in the low 80's, with a blue sky sprinkled with little cotton ball clouds, and just the slightest breeze to keep you from being too hot. It is SOOOOO good to be warm and dry again. Now if I could only have my biplane with me, it would be a perfect setting.

My room is on the fourth floor of a very old hotel situated at the inland end of the harbor. From my room I can look out over the narrow U-shaped harbor and see all the small shops and cafes and boats. It's peaceful, with the slow pace of a seaside village. There are tourists, certainly, but not so many of them to crowd the place. In front of the shops is a one-lane, one-way street. On the harbor side of the street are the sidewalk cafes. On the other side of the street are the little shops. Occasionally, from the street below, I can hear outbursts in Italian (almost certainly cursing and derogatory language, from the sounds of it), a refreshing change from the French of the last few weeks. Every once in a while, however, there will be a very French "Oooh-la-la" from a dockhand as a shapely tourist passes by. It's a great scene, and I want to get out in the middle of it. 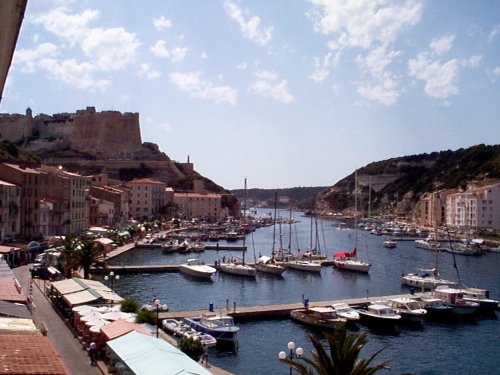 Sean went for a run to work off some souvenir inches he picked up in the Paris restaurants. I have stayed back in my hotel room to enjoy the view, the weather, without strain, and to catch up on my mountain of e mail, and to write these few lines to share Corsica with you.

Now I'm going to go out to explore the ancient fort which dominates the skyline at the top of the hill near the mouth of the harbor. Later, I'm sure the natives, and the tourists, will be restless, and the several 'discotheques' will be jumping. There is one called "Amnesia" which sounds, by its name alone, to be perfect!

I think of my lovely biplane and hope that it is not too mad at me for leaving it in Paris. I hope that it does not hate me for being warm and dry while it is shivering in some unfamiliar hangar in the French countryside. Maybe my friend Helene will look in on it and reassure it that soon it will be warm, and that I will come back, and that we will fly again, and that the dream we set out with will surely become real.

As I write this, a small plane flies low, past my window, in a tight left bank, looking down on the harbor of Bonifaccio, as if to say "Be patient. It will be better than even you can imagine".