Awake early, I made some phone calls to see if I could find someone to fly with, but the two professional pilots I know who are familiar with Paris airspace both had other plans. As it turned out, it didn't really matter. Later, I called Sean's room, waking him for a quick breakfast before I took the Metro/Taxi trip to LeBourget to see if I could fly.

The weather at the airport continues to be pure yuk! Low overcast, cold wet air. The good news is that it didn't rain for the first time in seemingly weeks.

I had a very good visit with my biplane today. I cleaned out the baggage compartment, and rearranged everything the way I wanted it. It had become completely fouled up with all the people in and out of it at the Air Show. This was a good meditative time for me to become reacquainted with my plane. I went completely through both the front and rear cockpits checking out everything and making sure everything was in its proper place. I removed excess stuff and put it in a long term storage box for when I return in September. I set up the cockpit with my log book, hand held radio, kneeboard with checklists, pens, flashlight, and all the other little goodies which are needed in the process of flying. I checked the floors and all around the controls to be sure there were no loose items (I found several packets of photographs in the front cockpit left by the Waco factory people). This process of going over every possible thing in the plane is something which I do to make myself comfortable with taking it into the air. I like to know that the machine is in PERFECT working order. With all of this done, I was now ready to do some flight planning.

The LeBourget airspace is quite complicated. Unlike most of my flying in the US, where I just jump in the plane and go, at this airport it is mandatory to file a flight plan, even if you are going VFR and staying in the country. In addition, one does not just take off and fly direct to the destination. Here at LeBourget one must leave either to the east or to the west, only, because Paris is to the south and Charles de Gaulle airport is to the north and you have to stay out of those two spaces. Immediately after taking off, regardless whether it's east or west, one must fly through two different reporting points which can only be located by the intersection of radials from two different VORs. These reporting points are not on my moving map database, so I really must use the VORs, a procedure which I haven't dealt with in years! Today I spent at a table with my navigation charts, planning my exit from LeBourget and getting all the radio frequencies documented and visualizing how I would deal with both the departure and arrival airspace. I have been accused of actually spending TOO much time in the preflight planning process, especially when I am flying alone. I look at it more of a visualization process which gives me the confidence I need to feel comfortable. After a couple of hours of this, it was now time to tackle the red tape.

I spent some time dealing with the Customs situation, and finally received permission to fly my plane. I signed a document (without a clue as to what it says), and they tell me that it's OK now to take my plane to the UK. I'm living in denial. I figure that if the weather ever does clear up and we ever do get to fly toward England, then I'll deal with their customs when I land and maybe tell them that the plane is inoperable so I won't be able to fly it back out of the country right away.

With the governmental paperwork cleared up for now, I then went over to the operations office of Euralair and picked up some weather forecasts. The morning forecast said it would rain in the afternoon, but by the time the afternoon forecast came out, it said it would not rain. I called the airport to the southeast of Paris where I had planned to fly to check out my directional gyro, and they said it was low ceilings and low visibility. As the ceilings lifted in the afternoon it seemed as if I could have flown, but the air was still cold and wet, so I passed on flying for today and returned to Paris to buy that cashmere scarf that I saw last week which at the time was too expensive. After several days of being cold and miserable, I have decided that it was now a bargain!

So now my plane is ready, and the government will let me fly it, and I have a scarf to keep me warm, and the weather is forecast to be flyable (but just barely) tomorrow, and I have meditated and visualized, and now there is nothing left in my way at this time. Tomorrow, all I have to do is fuel the plane and go.

I am getting quite capable with the subway system. I have been able to emerge in the desired place with consistency. I have also developed the requisite mannerism of not having any direct eye contact with some of the loonies who inhabit the underground trains. There is one particularly interesting method of begging I have noticed: A fellow gets on the subway car, and makes a short, but loud speech (I haven't got a clue what he could be saying) and then goes through the car collecting handouts. It doesn't appear to be very effective, but it's novel.

As good as I have become in navigating the subway, I was a complete failure above ground. I went for a walk on the Rive Gouche (Left Bank) today and got so lost that I thought I might just have to send up a flare. I forgot about my compass watch, but as disoriented as I was, it may not have done me any good. The positive news about all this is that I stumbled on some really great little places. The Rue Bonaparte is a street so hidden that only the lost could find it. I found a rare book store window which totally captivated me. It's a good thing the shop was closed or I could have lost control and started a collection of very old books in languages I can't read.

I met up with Sean for a late afternoon lunch. His plan was to run several miles through the streets of Paris and top it off with a run up the Eiffel Tower. (Yeah, right!) He called me later and confessed that he had also gotten lost! Never did get to the Eiffel. He got so lost in fact that he took a taxi back to his hotel. Amazing coincidence.

Tonight we plan on taking in the Hard Rock Cafe, just to be able to say we were there!

While I was working on my plane at LeBourget, a Gulfstream IV landed and pulled up at a ramp next to Euralair. There were dozens of photographers waiting for it. The plane was painted the most disgusting black and red with the Batman logo and a sign "Batman and Robin, World Tour". I didn't recognize the people who got out, but the photographers sure went wild! Who do you think it was? 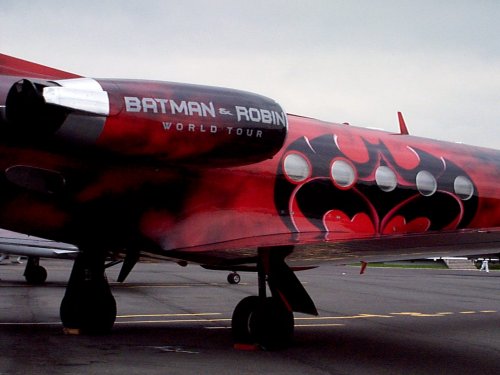