After a most sumptuous and delectable dinner last night, Sean and I took to the streets to walk off what surely must have been a week's worth of artery-clogging fats, cholesterol, and other tasty stuff. This was one of those times when, if you are not expecting anything in particular, the most incredible things happen.

We walked slowly toward the Boulevard St. Germain, the main street close to our hotel. As we got closer, we could hear music and shouting, and were pleased to find a reggae steel drum band playing at a sidewalk cafe, and stopped to listen for a bit. It was only when we looked beyond this spot, and further down the street did we even begin to comprehend what was happening.

The Boulevard St. Germain is a wide street, a four lane center section, with a wide sidewalk. The entire width of this street, and for as far as the eye could see (and it was still light enough to see a good distance) was filled from side to side and everywhere in between with people of every description, and they all had only one thing on their minds: PARTY!

We turned away from our little band and headed for the main crowd, diving into their midst, and walked among the throngs for at least two miles! There were several different bands on each block we explored. The traffic had been blocked off and there was just this enormous, mad street party. It was not only on the Boulevard St. Germanin, but it spilled out for many, many blocks in each direction! In fact, we could not even determine the outer limits of this madhouse, and we tried. It seemed that the entire city of Paris was one incredible party.

It was a combination of Woodstock along with everyone's personal memory of the biggest party in high school. People were standing on the tops of street signs, and newspaper stands, and telephone booths, trying to get a better view of the bands.

Sean and I were mesmerized. Never before had either of us seen this many people in one place. I have been to St. Peter's Square when the Pope was giving mass, and it was nothing compared to this. I have been to Indianapolis for the 500 mile race, and it seemed boring compared to this. The only comparison I could make would be to Ft. Lauderdale on Spring Break, and even that event could not compare in sheer size to this zoo.

We walked for miles, still incredulous with the enormity of what was going on around us. Stupefying, jaw-dropping, mind-blowing and more. It was tough to get over just how big this party was, and get into it, but somehow we did. It was a party of epic, even cosmic proportions, and it would be impolite not to join in with gusto. So we did! We never did find out what the occasion was, at least that night. It was too much to imagine that they do this every Saturday night!

The next morning (Sunday 22 June), we learned that the previous night's festivities were in celebration of the first day of Summer. This mother of all parties was the brainchild of a French Minister of Havin'-a-Good-Time 15 years ago, and in fact this kind of revelry happens all over France. I'm beginning to like it here!

The day began somewhat late in the morning, due to the need to recover from the mongo party. We had some of that excellent French coffee along with an apple torte, at the Babylon cafe. Then it was a brisk walk for several blocks to check out the Musee d' Orsay, which is a renovated train station of magnificent architecture and now houses the prize possession of all of the Ministry of Culture, the collection of 19th century art, especially the Impressionists. 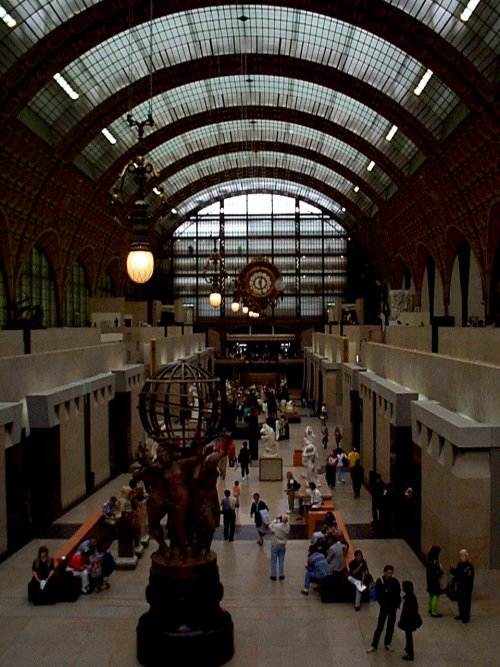 My high school Fine Arts class came out of the cobwebs of my mind, and here again were the paintings of Renoir, Degas, Monet, Manet, Gaugan, Toulouse Lautrec, and many, many more. Even my favorite sculptor Rodin was represented with his Gates of Hell, and several other pieces. A sculpture which I have never seen before was the polar bear by Pompon. It was so real you were compelled to reach out and touch it (strictly forbidden). It was just incredible to see hundreds of Impressionist paintings hanging on the walls within easy reach of the crowds (and they were considerable!). These pieces would easily bring millions of dollars at auction, and yet they were perfectly accessible to anyone.

On the way back to the hotel, we stopped at a nearby fruit stand and picked up some cherries, peaches, cheese, crackers, yogurt and some Evian. It was a great meal!

In the early afternoon, we attacked the subway system, the "Metro", and found our way to the outskirts of Paris then a very quick taxi ride to LeBourget for the last day of the Air Show. A most extraordinary treat was the Russian Su-37, with vector thrust, which displayed aerial maneuvers I have never seen before. One is the "cobra", which involves the plane pitching nose-up while in level flight, still continuing in its original forward motion, then returning to level flight again. Another maneuver shown for the first time was a complete flip, which starts with the cobra, except that the nose goes past the vertical, continues right around past the tail upside down and comes out into level flight again, all the while maintaining the original forward direction. It's a true "flip". Unbelievable!

Sean was very impressed with all the attention the Waco was getting, but he was completely awed by the enormous power of the fighter jets in action.

We ducked into the American Pavilion just in time to escape a major downpour. (More rain!) My mission there was to enlist the help of the US Commerce Dept. with my negotiations with the French Customs. I'm not sure if that will reduce or increase the mountain of red tape, but at least it's worth a try.

There was a break in the rain and we took advantage of the interlude to jump on a bus to the Metro, then with the aid of a lovely young lady named Sophie, we found our way back home. It was a major achievement: We descended into the bowels of Paris and came away with our health, our knickers, and our possessions. Emerging from underground, I used my compass/watch to find the way back to neighborhood where the hotel is located.

We sat under cover in a local cafe, sipping an excellent Port wine, watching the wet world go by.

Tomorrow I go deal with the red tape of the French customs department, and deal with the broken HSI, get the right wing adjusted, and maybe, if the gods are with me, I just may FLY!!!