By noon the sun is shining,
just now,
and now not,
through a low and broken layer
of swollen rain filled clouds.


As each rare gift of light
pierces through the gray
moving overhead,
the patrons of this sidewalk cafe
lift their faces up
to gather in the warmth,
and smile.


All too soon,
the light fades,
the air turns cold,
and smiles go grim.


Do they sometimes dream of my land,
for its eternal sun,
as I have dreamt of their land,
and its fabled romance?
And when they visit,
(if they do),
do they find the sunshine unfulfilling
without their home's romance,
as I find much the same?

Paris is a fantastic city with more to see and do than 10 lifetimes could consume. Incredibly sophisticated, yet terribly common, it is still a city, and for that, I cannot endure much longer.

Give me some remote stretch of beach, even without sun, and my spirit soars. Put me away from these teeming millions, give me peace in isolation. Let me breathe pure fresh air. Let me see a tree in its natural place, a view of sky without man's obscuring stones. This is the music in my soul.

The words come back to me easily. From a poem, by San Juan de la Cruz, reprinted at the beginning of Carlos Casteneda's "Journey to Ixtlan", it is about the mythical solitary bird.

"The conditions of a solitary bird are five: The first, that it flies to the highest point The second, that it does not want for company, not even of its own kind. The third, that it aims its beak to the skies. The fourth, that it does not have a definite color. The fifth, that it sings very softly."

That solitary bird is within me now.

(However, I think that tonight the "party animal" will replace him, but for just a little while!)

Sean Curtis came over from London later this afternoon. Sean was the very first person to buy the TeleMagic software, even before it had a name, in 1985. Over the years we have become good friends. He will be flying with me for the next couple of weeks, as we tour Europe. We are hoping that we can visit England, Scotland, and our shared ancestral home Ireland. 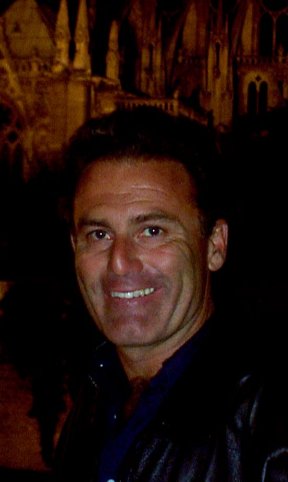 You'll probably be hearing a lot more about Sean in the coming weeks, so here's a photo I took last night for you. Notre Dame cathedral is in the background.