Although I was just moving to a different hotel, it was good to be packing my bags again. It gave me a feeling that I was actually going somewhere. This was a short distance move, from an airport hotel at Charles de Gaulle airport, on the outskirts of the northeast side of Paris, to a very small hotel in the very heart of Paris. They call this the 7th district, which is a very nice section, habituated by intellectuals, according to the taxi driver who delivered me there.

The room is claustrophobic, it is so small. I can deal with that. Maybe I'll get out more often. There are no English speaking channels on TV. That's ok, maybe I'll meditate more. The phone system is primitive, only rotary dial phones. Remember them? I have tried every possible method, even an acoustic coupler, to use my computer to dial out from the room, to no avail. The only way I can get my e mail is to take my computer to the front desk and plug my phone adapter into their fax line, which bypasses their switchboard. That's ok with me too, because my room is on the first floor, only a few inches from the front desk. (It's a VERY small hotel!)

The hotel is owned by 3 very nice French women: Daniele, Sophie, and Catherine. They are quite small too!

The rain stopped soon after checking in, and the walls of my room were closing in on me, so it was a good time to escape. I took a tourist map of the center of Paris with me and found my way, on foot, to the Boulevard Saint Germain, and heading in the general direction of the Notre Dame Cathedral, using the compass in my watch as the primary navigation instrument. Paris is a maze of streets that change names abruptly, streets that are only one block long, and intersections of 5 or more streets which seem to come together, but not continue out the other side. I'm sure city planners have learned a lot from the mistakes in Paris.

It wasn't long before the rain started again and I ducked into a sidewalk cafe and took a table by the window so I could examine the city as it passed by me.

The streets were very busy. Even with this inclement weather, there were people everywhere. Tourists, students on vacation, the huge number of unemployed, homeless, beggars, police.... pedestrians of every sort fought their way along narrow sidewalks and across streets clogged with traffic moving along fitfully, honking and cursing each other while scooters weaved among them all.

Smoking is omnipresent. They smoke as if it were good for them. Could they have got the news wrong? I have never seen so many people chain smoking. They smoke when they eat!

And they do love their baguettes! It seems that everyone is carrying a baguette or two, conspicuously sticking out from it's too-short white paper bag. The people who aren't openly carrying a baguette, I suspect of having the remains of one tucked away in a handbag, or stuffed in their knickers, or else they are on their way to get one.

I think maybe national flags would be more identifiable if they dropped the abstract colors and replaced them with more generally recognizable icons of life in the nation they represent. I'm thinking, for example, that the baguette would be ideal for the French flag. The US would have a Big Mac, a guitar (for rock 'n' roll) and a '57 Chevy. Italy's flag would have a big steaming meat-a-ball, and a Ferrari. Germany would have a big fat sausage and a stein of beer. Ireland would have a shamrock and a pint of Guinness.

Women are at least 30 pounds slimmer in France than in America. There is just no question about this. And from my observations from this sidewalk cafe, there are more redheads here than in America, per capita (no pun intended, but what the heck).

The trees along the Champs Elysees are a soldierly lot, standing tall and straight, and very well trimmed along the sides. I get the feeling that if just one leaf were to overhang more than the others, some Parisienne would report it to the Gendarmerie who would trim it immediately. The streets are clean, and there is very little graffiti.

My 'mixed' (ham and cheese on a baguette, of course) sandwich is finished, and the rain has stopped again, so I'm off again to walk the few remaining blocks to Notre Dame. The cathedral is on the Ile de la Cite (Island of the City), a very small spit of land in the middle of the Seine river, which was used in earlier times as a prison (the island, not the cathedral). Soon, the ambiance of the locale takes on a more sombre tone, and I round a corner to see this awesome cathedral with its enormous flying buttresses, an architectural characteristic of the times. 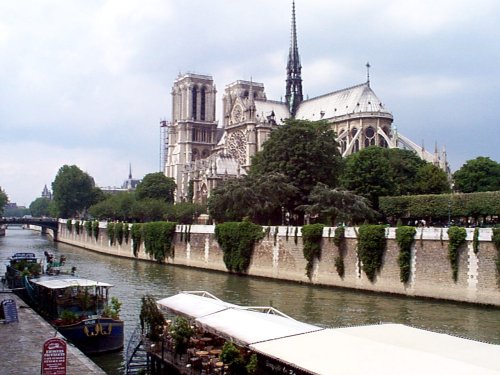 I toured this cathedral about a week ago. This time I'm here for another reason. I find a place to kneel, close to the altar in the center of the church, bathed in the filtered colors of two of the largest stained glass windows ever built by man, and strike up a conversation with my Maker. (The thought occurs to me that St. Peter is up there saying something like: "Hey guys, look at this! There's McCafferty down there in Notre Dame! The last time we heard from him was that night he was speeding around a curve with his lights out, passing a milk truck, outrunning the cops! That was a long time ago. Wonder what he wants now?").

It's a humbling experience to kneel in this great historical church, which survived everything, even the Nazi invasion, and has been the source of so many prayers sent to heaven, that it seems impossible not to do the same. My prayer is simple: safety for my passengers and myself, a successful tour, and the hope that my writing will inspire some people to join in the search for a cure for paralysis. I light a candle, and leave.

Barely visible over the rooftops in the distance is the most recognizable landmark in Paris, the Eiffel Tower. I haven't had a good walk in two weeks, so I decide to go for it. I follow the Seine the entire way, passing the "Bateaux" (river tour boats) which sell a more comfortable way to get there. In a park along the Champs Elysees there is a statue of a man on a horse, sword held high. The inscription reads "Erected by the school children of the US, in honor of Layfayette. Statesman, Soldier, Patriot". Without the aid of Layfayette, and the French, we'd still be a British colony.

It is a very long walk, as it turns out. The weather turns rainy again, and cold, and windy, but I press on. Perfect weather to be nursing the remains of laryngitis. I must be crazy, but I'm on a mission. By the time I get up to the top of the Eiffel Tower, the rain is being blown horizontally and it is impossible to stand on the windward side of the open deck. I descend to the enclosed level one flight down and look out over the city of Paris, a long, long way down. The photo below is facing south, and in the distance is Santiago Chile, 11,625 kilometers away, according to the sign above the window I'm looking out. You probably can't see Santiago because of the clouds and rain, but in the foreground you surely can see the Seine. 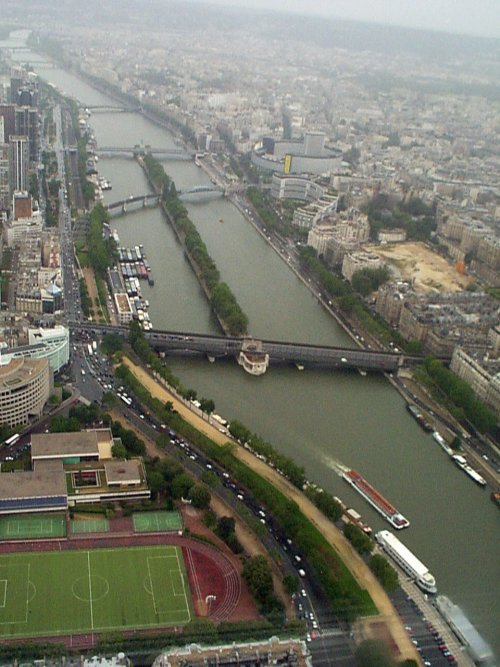 A digital display informs me that 169,092,917 people have preceded me on this tour since 1889. Monsieur Eiffel built a very durable piece of work.

At this altitude, the conditions are raw. I take the elevator down to an indoor cafe on the second level, only 30 stories up, and get a cappuccino and apple tart amid a throng of highly animated schoolchildren from Spain. How delightful to hear another language, one which I can almost understand.

Barely warmed up, and mission accomplished, I find a cab waiting in line at the base of the tower (imagine! finding a cab in the rain!) and head for my cell at the hotel.

Now I'm really hungry. Sophie recommends the 'very good' restaurant just one half block away, but when I arrive at 7:15, I am turned away. They don't start serving until 7:30. The French are very precise about when they eat. It is virtually impossible to get a good meal until after 7pm. Lunch stops at 2pm. Breakfast stops at 10pm. If you are late, or early, you go hungry. Maybe that is why they are slimmer.

Dinner presented a challenge. No one spoke English, and the menu was entirely in French, but I secured a wrinkled, typed translation from behind the bar. One must be careful in these foreign countries. Some of the menu items were intestines (yuk!), snails (hardly any better!), and other stuff which was untranslated (untranslatable?) and probably indigestible. I played it safe and ordered the chicken.

It was magnificent. It was prepared baked on a bed of spinach and capped with a flaky pastry crust, all of this surrounded by a mustard/cream sauce that was extra-terrestrial. That's when it hit me: This was my first professionally prepared French cuisine since I've been in France! Everything else I have eaten was either institutional hotel food, or air show food, or sidewalk cafe food. Hardly haute cuisine. But this was the real stuff. Vive la France!