I'm wearing out on all the rain. It's been raining just about every day for the last week, it seems. Cold and wet is not my idea of a fun combination, and it's not doing my laryngitis any good either.

It was a perfect day for finishing my tour of the Air and Space Museum. Today I got to see the largest building, the one reserved for the earliest flying machines, up through WWI. This was most definitely the finest part of the museum.

The only word I can think of to describe these early aircraft is exquisite. It is quite evident that early aviation pioneers took their inspiration from birds. The wings of some of these machines are so delicately shaped that you would think that they are in fact part bird.

Some of these machines, however, are comical! It seems that almost every conceivable shape had been tried, almost in a random fashion, to figure out what it would take to fly. There were machines with 2, 3, 4 wings, some with circular wings, some with the enpenage in front, some with 2 wheels, no wheels, 4 wheels, floats, or skids. Some had gas engines, some had steam, and some were part balloon.

I particularly liked one with a fuselage shaped like a boat, but it wasn't designed to be a seaplane. Down the sides of this craft were long rows of copper tubes which seemed to be designed to cool the water for the engine. It was certainly one of the most unusual designs I've ever seen, and this model was perfectly constructed. I just had to take a photo of it: 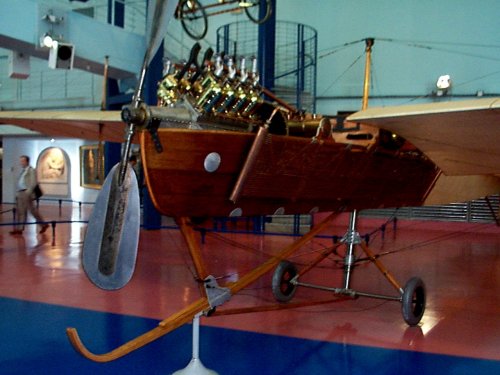 I'm getting the idea that the French are absolutely in love with aviation. Even their money reflects this. I was delighted to discover that my favorite aviation author is featured on the 50 Franc note (front and back). Antoine de Saint-Exupery (1900-1944) was an early mail pilot, flying the open-cockpit biplanes across North Africa and through the Andes in South America. He wrote some of the finest books about these experiences, but he also wrote one of the world's most popular children's books "The Little Prince", whose color drawing appears on both sides of the bill as well. If you ever get a chance to read any of Saint-Exupery's books, do it! They are wonderfully written, almost poetic.

When I think back to these early days of aviation, and the great hardships that these pioneers endured, I feel very fortunate to be benefiting from their efforts. They had to fly without weather reports, without navigation aids, without radio, and their machines were notoriously unreliable. Who was it that said "If we achieve great heights, it is because we stand on the shoulders of giants." These men were the giants of aviation. It is a humbling experience to walk through such a great collection of these earliest of flying machines, and to learn about the people who designed and flew them first.

There was a Wright Flyer replica in the collection, but it wasn't treated as anything special, just another piece hanging from the ceiling.

For the first time since I've been in France, I really wished I knew the language. There were no translations into English, and I could make out some of the display text from my familiarity with Spanish and Latin, but it would have been so much better if I could read in detail about these early heroes and their machines.

I visited my Waco at the display area today. Seeing it there enduring a light rain, it appeared quite lonely. I know it wants to fly, and to feel the tickle of grass under its fat tires. I know it wants to be free of all these people, and get out from behind that metal fence. I sure want to set it free!