And now for some not-so-good news...

Yesterday was so thoroughly excellent that I could not bear to discuss the less than positive aspects which evolved. Today it seems appropriate to share it with you.

The first thing I noticed during preflight preparations was that the trim wheel was definitely behaving differently than before. It operated the stabilator properly, but the feel was way off, seeming clunky and harsh. I made a mental note of it, and continued with the flight. In the air, the trim wheel was very much more difficult to operate, although it would respond properly. It just needed a lot more muscle to get the desired results. We definitely need to work on this back on the ground. Not a major thing, but...

As soon as I switched on the avionics, it was evident that the HSI (Horizontal Situation Indicator) was toast. This device is a gyro-stabilized compass which also gives me a visual CDI (Course Deviation Indicator) readout from my GPS (Global Positioning System) as well as my second VOR (Very high frequency Omni Range). Now all of this alphabet soup of acronyms means nothing except that without this critter, you can't tell where you're going!! Well, you can actually, because there is a wet compass as a backup, and there is one other VOR on the panel, (I even have a VOR in my backup hand held radio, now that I think of it). So I wouldn't get lost without my HSI, but it is sure one of the sweeter instruments on my panel, and I will not be leaving Paris without this one repaired. Carl figures that it got bounced around too much on the train ride from Detroit to Montreal, before being loaded onto the ship to France.

And then there is the tail wheel. For the first time ever, it shimmied on landing. I couldn't believe it. I have heard of other Wacos doing this, but mine was always so smooth. Carl said he would have another entire tail wheel assembly shipped in from the factory, and he would put it on himself. Class act!

So the plane has demonstrated a few complaints after being mistreated and ignored and stuck in a box for more than a month. I suppose I would too.

But what's going on with ME? For about a week I have been noticing a slight tightness in my throat, which I attributed to the constant presence of cigarette smoke everywhere around here. I just figured I would get used to it and the scratchy throat would go away. Not! Two days ago, it was really bad in the morning, then got better at the end of the day. Yesterday, it was ok in the morning, so I thought I was on the mend. Not!

Yesterday's perfect day of flying took its toll. The air was chilly and wet, and my coat collar was not tight enough to keep out the cold. By the end of the flight I was very hoarse, almost inaudible without shouting on the radio. By the end of the day I had lost my voice completely, and this condition has continued throughout today. For the first time in my life, I am mute. I'm a mime! If there is any consolation in all this it is that I cannot speak the language anyway, so why bother. Another consolation is that the plane is locked up in the display area, so I couldn't fly it even if I could speak.

So my biplane and I are both suffering from some minor ailments, and we will work on getting fixed up over the next few days.

While I was out today, dealing with some of the red tape involved with the air show, I tried to get a little sleep in the back of the rental car while Carl waited in line to get exhibitor badges. My rest was rudely interrupted with the sound of some of the most powerful jet engines produced by man, flying just a few feet over the roof of the car. Then I noticed that we were parked at the approach end of the main runway at LeBourget. Can anyone identify this fighter jet? 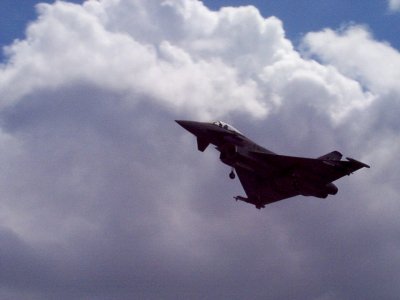 I hope your Friday the Thirteenth is going better than mine. Thanks for being there. It helps to have someone to talk to, especially when you have lost your voice!