The rose-lavender-peach colors of dawn filtered through my window this morning to invite me to go flying. I couldn't have been more ready to start the day.

Unfortunately, it would be at least six more hours before we unwound all the red tape associated with 1) Normal preflight preparation 2) Flying in France 3) Flying out of LeBourget airport 4) Flying a plane associated with the Paris Air Show.

At last I taxied out to Runway 25 and pushed the throttle full forward. For the first time in two months I was being pressed back in my seat, speeding down the runway, getting lighter all the time, lifting up into the headwind until that magic moment when the wheels finally separate from the ground and the wings take on the entire weight of the plane, the moment when man becomes bird, the point in time when the dreams of all mankind from the dawn of history are realized -- I fly.

At only 1000' I can see the skyline of Paris, the City of Light, with the Eiffel Tower as the "piece de resistance" prominently set out against the background. The surrounding countryside is green all around me, the highways leading out of town become narrower, the cumulo-nimbus clouds become more broken, and the day is so perfect I want to scream. There is no substitute for flying. It can only be appreciated by a flyer. Only pilots know why birds sing.

In a short while, I am crossing above Pasan-Beaumont, a small uncontrolled (there is no air traffic controller) airfield to the north of Paris, turning into a right downwind pattern for a landing on the asphalt runway, 28 Right. There is a grass runway just to the left of it, and I want to touch down on this soft natural grass so bad I ache for it, but I am saving it for desert. Right now, I want to just do a normal landing, maybe a few of them, just to prove to myself that I can still do it. It has been 60 days since the last time I landed an airplane and I really needed to be sure that I could still do it. Is it like riding a bicycle? Is it impossible to forget how to do it? Will it come back to me in an instant?

The answer, dear reader, is yes. It came back to me as though my last landing were yesterday. It was not perfect however, but then I have had only one perfect landing in the 1544 landings (yes I count each and every one) so far. Maybe I will tell you about that one someday. For now it is important only to say that this one was delightful in its own particular way. This was my first landing in France, so how could it be anything but wonderful. Oh, I admit it was a shade fast on the approach, and so I floated a bit long down the runway, and maybe I bounced just ever so slightly (not enough so that anyone would ever notice, but then I'm a perfectionist). All thing considered, it was a very good landing.

I loved it so much I rolled out only a little bit and then poured the coals to it and lifted off for another try. The second one was even better, but still had some imperceptible element of imperfection which just made me want to do it again, and then again, and then again, until I felt that my hunger was satisfied. And then I had desert.

The grass runway is situated directly next to the main asphalt runway, but it is much wider. I had heard that this particular grass runway was rough, a bit bouncy, but when I first touched down, it was as if pillows had been arranged for my visit. There was a slight direct crosswind of about 5 to 8 knots, but the grass let the wheels slip to the side ever so slightly, removing the faintest trace of squeak which would have occurred on the asphalt. Instead there was just a wonderfully quiet fluffy "Welcome Back" when a biplane trades sky for grass.

I had several helpings of desert this morning, and each was as tasty as the first, and I would still be there right now, gorging myself on the finest aviation experience a pilot can have (just ask any pilot you know!), but today I had a higher purpose. I was on a "Mission". Today I was going to the English Channel. The airfield is called LeTouquet, on the northwest coast of France. The plan was to see the English Channel, to touch the other side of the Atlantic Ocean, to fly low over the beach and to return to share the experience with you.

Here is a photograph of the northern beach of France, along the English Channel, just to the west of LeTouquet, as seen from the cockpit of my open-cockpit biplane at 100 feet above the water: 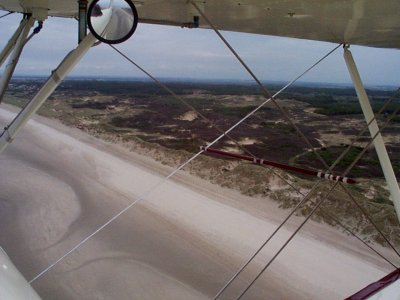 The town of LeTouquet is a wonderful blend of English and French. It was the first time I had heard the English language spoken properly in the week I've been in France, but then it was because it was spoken by Brits. The town of LeTouquet was chosen by English kings as a summer getaway, and the populace of southern England has been popping over here ever since just for a quick change of scenery. It's only 50 miles from England, across the channel. The town is right on the beach, an improbably wide beach of the most appealing sand. I had to take home a few sea shells as souvenirs. The village is small in every respect. The streets were small enough only for one lane of one way traffic, the sidewalks were less than 5' wide, and the tiny shops were probably only double that in width.

It was a typical coastal day, a low overcast, and scattered light rain, so I had a quick meal and back to the airport for an early departure. The return trip to LeBourget airport, to the northeast of Paris, was uneventful, except for the occasional light showers enroute. The clouds hung low at just 1000 feet above the ground, and that was just fine with me because I wanted to be close to the farms and villages just under my wings. In the 100 miles between LeTouquet and Paris I passed over many little hamlets which must have been at least 500 years old, with huge central churches and tiny little houses clustered all around for protection from forces above and without. It was as if nothing had changed here, ever, at least not from my vantage point.

It was an absolutely superb flying day. It is amazing that it happened when it did, because it was the last possible day I could fly before the Paris Air Show. The moment I landed, I taxied to the special exhibition area and was towed into the parking spot where my lovely Waco biplane would spend the next 10 days among some of the most awesome aviation machinery in the world. More than a million people will see my Waco, this incredible piece of flying sculpture. They will admire it, they will desire it, they will harbor secret fantasies about what it must be like to fly it... but could they ever imagine a day as perfect as today?