While Carl was attending to the many details of re-assembling the biplane at the Euralair hangar at LeBourget, I ventured out into Paris to find aviation navigation charts for Paris, Northwest France, and Britain.

Yesterday, our new friend Alain Strausz gave me the address of a shop called General Aviation, in the south of Paris which could supply the needed charts. I called the hotel front desk and requested a taxi with a driver who could speak English. This was no small task in itself because the clerk at the front desk could barely speak English herself, but we finally muddled through it.

It seems that the French do not speak English if they can avoid it, and delegate the speaking of English to foreigners specially imported for the purpose of dealing with other foreigners. As a case in point, my taxi driver was Vietnamese, ex-Army officer, a fact which came tumbling out of him almost instantly when I spoke my first words to him. He also was quick to say "My brother, my sister, my mother at Saigon Hilton." That was, it seemed, the entire content of his English vocabulary, but I didn't know that at the time. I gave him, verbally, the address I wanted, on Rue Mademoiselle, he thought about it for a moment and then nodded enthusiastically.

I asked him several more questions as we drove along, but each of them was either ignored (as if I was not speaking to him, who else?!), or he looked at me in the rear view mirror as if I was speaking Martian, or he said something back to me in a language that didn't even sound like French. This got me to wondering if we had ever really communicated at all, and would I ever wind up at the Rue Mademoiselle.

My concerns were soon (after 210 Francs had counted on the meter - about $40) proven correct. He slowed down and pointed to a huge building with a dome, what looked like a government building and said "General Aviation" (in French). This was ludicrous to me that a little pilot supply shop would be in such a place so I asked him "Rue Mademoiselle?" and he said "Oui" and looked at me as if I were mentally retarded.

That's when I took pen and paper and spelled it out for him. He took out a magnifying glass (I swear to you!) and looked it over suspiciously, not seeming to comprehend what I meant. I looked for street signs and saw that we were on a street which resembled "Mademoiselle" only in that it began with "M". I pointed to the street sign, then again at my piece of paper. That's when he took my paper and started to guess at each letter: "F?" (NO! "M") and so forth until we had gone thru the alphabet several times and he seemed to have finally gotten how to spell it. He then consulted a huge listing of every street name in Paris, and with the aid of his magnifying glass finally located "Mademoiselle", and then compared it to my paper, and then seemed to explode in a fury composed of despair, hatred for all Americans for ruining his homeland, for me personally for being so retarded, and for the rest of the ride he seemed intent on killing all pedestrians, scooters, and any car smaller than his Mercedes. He weaved thru traffic like a madman, and I really thought that I had met my end. How ironic to have survived the Vietnam War (by joining the West Virginia National Guard) and 30 years later to die at the hands of a crazed Vietnamese in a taxi in Paris. Life is very strange.

But God was good to me today. Somehow the little shop called "Genereal Aviation" appeared to me as we were speeding down the street and I yelled "STOP!!" (that seems to be an international word), and he skidded to a halt amid the honking of horns behind us.

I paid him the fare reluctantly, knowing that I was highly overcharged due to going way, way out of the way. I even told him that I would not pay for the part of the ride that was his mistake, but he started to come unglued and I began to wonder if this ex-Army officer may have had some weapons under his seat. Discretion being the better part of valor, I gave him his fare and got away quick.

In retrospect, what did I expect? Most taxi drivers in the US don't speak English either!

The rest of the day was anticlimactic. I got all the charts which any pilot could ever want so that I could study them in detail. The pilot shop was very professionally represented by Yves "Chris" Tourniaire the "Chef des ventes public" (Public Sales Manager), who spoke English. I inquired of Chris if there was a place nearby where I could get a haircut and he pointed to a place just down the street, and even walked me there and helped to translate my needs ("Just a little off the top, not too short, etc.) and then returned.

Caroline was the only person in the shop. A lovely Parisian girl whose English vocabulary about equalled my French -- almost none. Coincidentally, it seemed we knew the same words in each other's language, so nobody learned anything. When I stumbled out a question of could she do something about my "Blanc" hair, pointing to the ever-growing number of white hairs at the temples, she said "No, no! Is nice!" and touching my whitening temples with both hands and smiling sweetly.

In my later years, I may come back to Paris and take a room on Mademoiselle street, across the street from the "Coiffure" sign, just to be convenient to this tiny salon, so that Caroline may reassure me that my white hairs are so nice.

For my friends who may be interested, I have enclosed a photograph of Caroline. 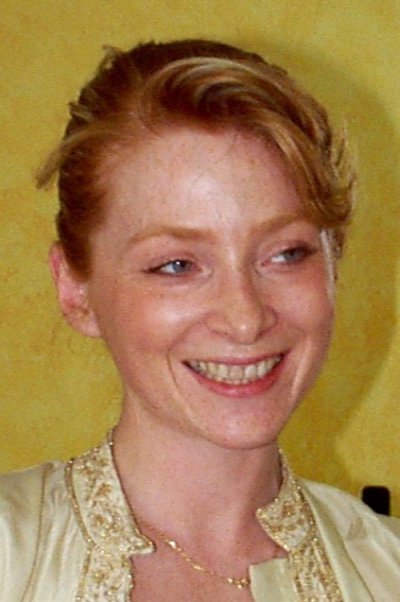 The rest of the day was spent studying the charts. Carl called to say that progress was going very slowly on my biplane. There will be no flying today, and tomorrow is still in doubt. I keep looking forward to the time when my wheels part company with the earth and my biplane lifts up into the air for my first look at France from the air. Soon I hope...